Here is the roundup for the past two weeks, sad as they are, thanks to Mike Gaspar, Johnny Bartlett and Jon Spack for the details:

- ten guys showed up. i guess the THREAT of rain kept people
away.

- there were about eight sprinklers going in the outfield.
thanks to tony for trying to turn them off. we should
get a credit for the permit.

- asshole league guys on the field. it would have been interesting
if we would have had our normal turnout to see how this conflict
would have been resolved. as it was, we were resigned to infield
practice on a little league field. which i skipped but i'm sure
some fine double plays were turned.

- and one last comment. league guys are DICKS. dirt-bags of course
are the exception

BP only. So sad. I hope it wasn't football that kept everyone home.

About 11 people showed - played a nice 6 inning game with Tony and
Johnny both throwing complete games. Away team won by breaking open
a 2-2 tie in the top of the 6th - all beginning with a 2 out 2 rbi
liner up the middle by Greg. I believe the final score was 7-3.

It turned out to be a great day, on the drive over I was fearing the fog and the wind would be strong elements to bear, but from some reason the fog ran just south of where we were, and it was all sun (well mostly sun) anyways.

We had 20 at one point, and 18 by the end of the game, one injury (Chad the hammy takes time) and Vivek (BBQ, not a good excuse, but what can you do?). Long lost Phil Snyder, of Utah and now Arizona showed up, as did Connor, Bob's young prospect.

Satch threw another complete game, which some might see as hogging of the mound, but it is out of necessity as I can already see that I am going to miss the next month or so of games, and 4 innings of work just won't satisfy the long drought ahead. As a rematch of last week, Johnny Bartlett started for the home squad and did well again, especially for a man who rode BART for an hour to get to the field. The key to Sunday's game was who's defense was less shitty. Not necessarily a slight to those who played, but it seemed we had a lot of players out of their natural positions, and we are not professional enough to be very versatile when it comes to that sort of thing.

The game started out ok, the visitors scored 3 runs in the first, and the home squad answered back, but then the visitors took off the kiddie gloves and before anyone knew what was happening, it was a 10-2 ball game again. Johnny lasted for the 7th and then turned the ball into Greg, who usually doesn't warm up until he has thrown at least 5 innings. Greg pitched well, ignoring the heckling coming from his own family.

Stronger built and mature than last week, the home squad had a bit more fire in the belly (and we all had some long innings) and by the end of the 8th, the score was 10-9, and Satch was feeling the heat coming from the hungry homers. However, padding was applied, thanks to a 5 run ninth, and while the desire was there, the win was not to be the home squads, and the final tally was 15-9.

* Bob HBP +1, a back shot, middle up. He threw his bat afterwards, but we all knew he was smiling inside

* A day of home runs and triples, half power, half dry field, half bad fielding, but kudos to Adam, Roy, Bill, Greg, Bob, and anyone else I missed

* Satch struck out on a gorgeous change up from Johnny, slow and inside, perfect! Bastard.

* Some needed outs in the outfield when they were really needed.

* Adam scoops at first, saving some bad throws and getting those outs

* Emperor of the North, rent it today at Lost Weekend Video!

* On Greg's triple, I stepped off, appealed, and threw to Nick to tag second, it looked like Greg missed it from where I was standing, and I figured he might be honest enough to admit to it...

* Doc playing, rather than officiating, and getting a nice hit!

* Connor using a cheater stick, luckily no one was killed

* Had a lot of battle counts this game, where I thought I was in the driver's seat, only to give up hits, tenacity is a motherfucker.

Well, it's a 1 year anniversary for me next week, so chances are slim, week after than in Tahoe, week after that a 30th birthday party, so someone write down what happens, and remember to lie frequently and colorfully.... 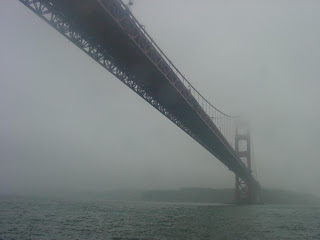 It was a great homecoming, after too many weeks off, Satch was back where he was supposed to be on a Sunday. And luckily enough people showed up to make it a game, although without the Dirtbags, it would have been rough. The Dirtbags, Chris and Brian and New Guy (Mike?) are a couple, few of fellows from the MBC who have moved on to league play, however, I guess the season is over now and we can expect them back soon.

Johnny and Satch squared off in a classic duel, and neither was in top form, but both went the long haul. Defense might have been on Satch's side for the beginning of the game, but we of the visitors squad had our share of dropped flies and booted balls too. Satch threw a lot of changeups, which seemed to stymie the overswingers on the homesquad.

Everyone got a lot of at bats, Mitch legged out a few close one's, Tony got hit in the foot, John Carey got pissed at a called third strike.

The loudest hit of the game was the New Guy Dirtbag, who took Satch to left, and once it got past our borrowed left fielder, there was no slowing down. By that time, it made the score 10-7, which was great, the majority of the game being the less exciting 10-2 variety.

* Bob's dance to get out of the way of my pitch, robbing us of a Bob HBP game

* The nastiest knuckleball ever thrown to Chris

* Nero had a nice line drive

* The Dirtbags, great to see you again

* Satch struck out looking, which is strange because some might have said it wasn't a strike

* Adam's digging it out at 1st

Thanks for everyone that showed up, see you again