No word on the game, but here are four artistic renderings by Nick Smith. 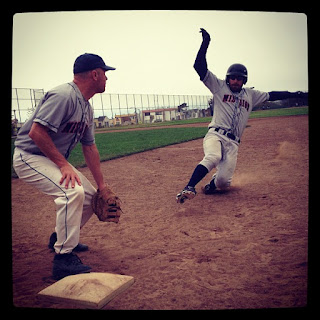 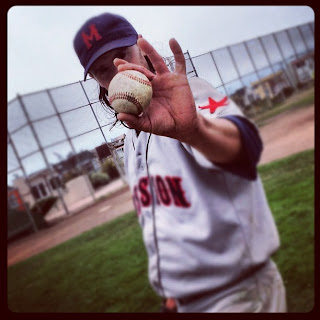 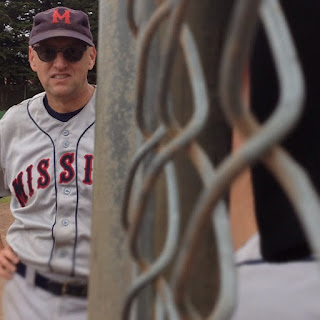 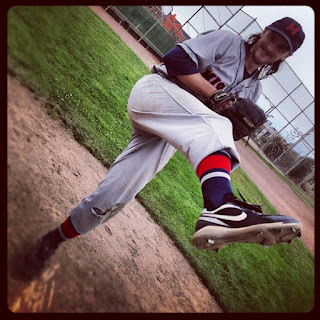 The long and the short of it is that we got destroyed.

Their pitcher Dewey had at least 16 K's and most of those were with the old fashioned hard stuff.  Satch threw 6 and felt decent, had about 6 K's.  Johnny Bartlett managed to shut them down for the most part, where I could not.

The A's are definitely the dominant team of the SQ pen this year.  They beat the Giants in a nail biter, that apparently got a little heated, as you might imagine.

* Everyone struck out at least once I think.

* The home umpire was not giving us an inch, and he gave the A's a foot.

* The A's 3rd hitter nearly killed me with a line drive up the middle.

* I didn't notice that many more people on the yard, everyone was friendly

* Phelps held us up forgetting his license in SF.....his girlfriend gets extra points for delivering it across the bridge

* I managed to do what I hate most, swung at a pitch while Powell was stealing, and even worse, popped up for a double play, double damn!

* We had 2 of everything, runs, errors, hits

* I hit three people, all with slow slow slow changeups and knuckles.  One guy tried to stay in the box and get his at bat

* Greg was the victim of the SQ right field play

* Phelps scored from 2nd and ripped his pants proper

* Ke played SS, threw out everybody that didn't K, and did pushups in between at bats, to " get some juice in his bum shoulder."

A good time.  A bad effort.

The doldrums continued, although we managed to eke out a pretty good game with 7-8.  The weather was beautiful and mound at West Sunset was in better shape than it has been for a while.  Carter and Johnny started for the teams and pitched the first 5 innings, both having good luck and back luck and MBC luck.

While the visitors drew first blood, it was mostly the homers game to begin with.  We had a run here and there, but we seemed to be over-matched for power when Rich put a ball damn near above the treeline in right field.  This thing was still rising when it hit a top branch.  Serious home run.

The visitors scrambled their way back to a tie game, thanks to some clutch hitting and Mission fielding.  Johnny and Carter swapped out for Will and Satch, respectively.  For some reason, Will's pitching was exactly what the visitors were looking for, and we started spraying hits all over the field.  Satch kept the big bats at bay or at least got around the big bats and got someone else out.  Either way, the homers were stymied, and the visitors came out victorious to the tune of an 11-5 final.

* Rich's home run was a thing to behold

* New guy Dan had some nice hits and looked like he know what he was doing.  He agreed that league guys were dicks

* John McG had two slides in one trip around the bases that were painful to watch and probably painful to experience   The slide in to second was a late decision, but not terrible.  The slide into third was a headfirst belly flop/stumble dive that broke his sunglasses and luckily no bones.  His slide later in the game looked great!

* Tony made a nice catch in center, after losing one in the glove

* The Return of Red Sox Will, and he got a hit

Can't find the time to finish this, anyone remember other highlights.

A game was held, but few details can be found.  Jay "Shutterbug" Cellini gave up these morsels:

We got creamed 9-4.  In a nut-shell, Sean pitched a beautiful game shutting down the home team (I think we were home) giving up maybe ten hits, including one monster home run to left by a guy I have only seen once or twice before.  I think there was one double that I scored from third on.

Brian who pitched for the home team for about 8 innings did a good job of keeping a stiff upper lip and Chris Powell came on for the remaining two innings and pitched well and also kept a stiff upper lip with the fielding help.  And a girl came out and played center field and did a good job including get a check swing single.  She threw well too, which was a nice thing to see.

The best part of the day was Brian getting picked off third by Sean.  Sean has one helluva pickoff move.  That's about it.
Posted by S. Paige at 9:48 AM No comments: