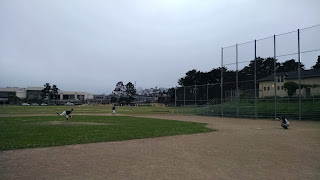 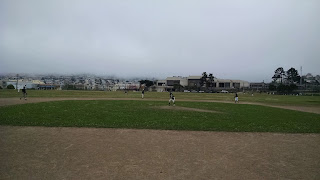 One driving into the city from the East Bay could see the line of delineation formed in the fog/sun in San Francisco.  I hoped for the best, but the closer I got to Balboa Park, the more it seemed we were cursed to play in the DMZ.  So it was sunny for the first few innings, and gradually, it became colder, windier, and foggier (as seen in the photos above).

I had Lil Satch with me again, loaded with snacks, cold weather gear, and baseball equipment, and in between at-bats, we practiced hitting in the backstop down the left field line.  I also benefited from him napping on the drive in.

Carter started for the homers and Satch for the visitors, and the game was a fairly low scoring affair at the beginning.  We scored 3 runs in one inning, the homers scored one run in another, and that was it for the beginning.

Having been thrown one pitch to swing at in 9 pitches, I took a walk in the fourth inning with two outs and Tony on third, and then employing a rather underhanded old dodge (AOY 2016!), I took off early from first to draw the throw and hopefully stay alive long enough for Tony to cross home.  It worked, Carter ran straight at me, threw it to the second baseman, who never looked in Tony's direction as he dashed home.  I was tagged, but the run counted and we were up 4-1.

I ended up throwing 5 innings, and felt good, McGrath was calling a good game and had some great blocks behind the dish.  I will also say that we had Aiden playing for real, and he did his father proud, as well as being a decent fellow to play with Lil Satch (who said that was his favorite part of the game) while I was on the mound in the 4th.

Around about that time, I realized that the young, robust and determined center fielder in the A's uniform, who had robbed myself and James of extra base hits was, in fact John Carey.  Truly he is a man among men now, and those who have followed this blog will remember that it seemed like only yesterday that he was tailing his dad in an oversize uniform, and getting at bats in between innings.  The word is that he is playing for his college team now, and is home for the summer.  Great news, if you aren't the guy that tattooed a laser shot to center field that gets miraculously caught.  John scored the first run for his team, in true MBC fashion, single, stolen base, throwing error, fielding error.*

*After the ball got past third base, I ran to field it and throw it home, unbeknownst to me, McGrath had the same idea, and I threw towards the body I saw near home plate.  That, of course, was the batter, home plate having been abandoned.  I am not sure if that counts as an additional throwing error or not....

Around the middle innings, the homers caught fire, and scored two runs and were threatening more when we were able to get out of the jam.  Carter  hit a triple to left and it was only due to excellent defense that we maintained the lead.

Mitch took over pitching for us, and threw two good innings, and then Tim took the ninth inning.  Those who can count will realize that we only played 8 innings, yes, we skipped the 7th, as the weather was turning fast, and we were in danger of losing more players, two of which had left in the 5th.

John took over pitching for the homers, and definitely led the day in K's, however it came at a cost.  His lively arm was wild, and Adam spent a lot of time getting hit, or chasing balls to the backstop.  Adam's zeal for the game was quickly eradicated.   I got on through a dropped third strike and a near collision at first with Elvin, which luckily resulted only in a glancing blow, but still, I eventually came around to score on a hit by Tim, an inning which sealed the fate of the homers.

The runs piled up, and the homers made nary a whisper in the ninth, the final score being 8-3.

* Thanks to everyone who came out, it seems that attendance has dipped a bit in the last few months, so we may need to start recruiting a little

* Mitch worked a full day and then came out and played, that is the love of the game right there

* Elvin may have mastered fielding with his right hand, but when it comes to throwing left handed from the outfield, he missed the cut off man by about 70 feet.

* Gaspar made an outstanding sliding catch in right field

* Tim and Tony combined for an awesome double play, with Tony making a great play on the conversion at second

* Adam showed his old colors that earned him the Bad Sportsmanship trophy, by walking away from the batters box after hitting a ground ball

* Aiden lined a ball straight back to me, if instinct hadn't taken over, I would have dropped it and forced him to run it out.  Great hit though!

* It was great to have Mitch in the outfield again, too often he has been relegated to other positions lately

* Richie managed to tune himself up at first with a knee and elbow injury, that hopefully was not too serious

* I felt really bad about the elbow in Elvin's ribs, but there was no way I was going to miss him completely, and if I ran into him with my body, he may have been killed.  The elbow was more of a bumper to keep the rest of me from colliding with him.  Cold comfort, but better than the alternative, given that I outweigh Elvin by about 150 lbs.

* Elon swung at a 3-0 knuckleball and popped out.  That might have been my proudest moment of the day

* Bob claimed he was gonna kick the shit out of me, if I hit his kid.  Tall order, given how full of shit I am.

* Lil Satch and I played 2nd base for the latter part of the game, and it worked out well, not only did we get to play next to Tony (his favorite) but he liked the warm-up grounders he got to take, courtesy of Nick Smith.

Thanks to McGrath and Phelps for giving me the recap, I really wanted to be at this game, but various obligations kept me away.  I am glad that Phelps was able to step into the starting role and do so well.


Traffic clogged up the base paths from the get go and even with the fear of Officer Wood blocking home plate, the Mission players were eager to go. But upon arrival the gatekeeper was not wearing an Ushanka but rather a smile. Officer Rico was suave and polite in the process of letting us in, making jokes as she went through our IDs and searched our things.
Paired with the fast pace of our liaison Andrew, we were on the field faster than expected. The crowd was ready and two lefties squared off and never relinquished the mound. The MBC scored first but SQ immediately came back and the game was tied.
SQ took the lead in the bottom of the second and it stayed that way for 6 innings. SQ All-Stars got 2 more in the 7th right before lock-up time called the game. Beers and burgers were had by all.
FINAL SCORE 4-1, SQ All Stars
Highlights:

* Mitch leadoff double, Phelps bunt single and Mitch scores on an RBI single by Duane.
* This would be our only run.
* Phelps got picked off at 2nd (again)
* McGrath had a double
* Phelps started his first game on the inside and pitched 7 IP, 4Ks, 4 Runs, 1 BB.
* 2nd batter of the game for SQ crushed a homer over the barbed wire.
* Don chased down a ball and barrel rolled onto the concrete… survived unscathed.
* Powell made a slick sliding stop at SS and made a sweet throw.
* Mitch made a nice catch in center and rifled back to an outstretched Duane to double up the runner at first. The ump called him safe but hundreds of “Oohs” let out due to the obvious fact that he was out:
Don: Can we appeal the call?
Ump: Are you asking me to appeal it?
Don: Yeah
Ump: Then he's out.
* Greg leapt out of squat faster than Johnny Badass and made a diving catch on a foul ball behind him that was only 10 feet high
* The game ended with the bases loaded and a hard hit ball to center off the bat of Mitch.
* One fan caught back-to-back foul balls.
* Maybe one of the best umpires behind the dish we’ve ever had.
* We learned origin stories for Sonny and Randy’s nicknames.
Posted by S. Paige at 9:26 AM No comments: