As the rest of the world starts down the road towards winter, we get 80+ degrees and sun.  Almost too much, the outfielders might have said, but hey, who's gonna complain?  We started late due to the league game before us, and Rojas was chirping from the beginning that we weren't giving him time to warm up before game time.  Somehow I got there exactly the same time as Tony, and I was on the mound ready to go, so who knows.

We had a stable 11-10, that became 9-9 by the end of the middle innings.  Satch for the homers, Sean for the visitors.  A little warmer than usual on the diamond, but that is always nice for the arm, which was feeling good. I struck out Richie to open the game, but that seemed to be the high point, as I then gave up a couple of runs.  Then a few more, interspersed with a K here and there, including the hardest fastball I have thrown in a while.  The lesson for today was when you have a good defense, use it.  We managed to score back on Sean to make it a game, and then we had two or three innings of good, lock it down defensive ball.  At least 10 ground balls in the infield over the course of 6 innings.  I'll take it!

Sean had his change up working, but he never threw it to me, I think, because I didn't give him the chance.  I did break out of the slump finally, and was responsible for 2 of the 3 runs our team scored in the first few frames.  The first was a ugly gork to right, but the second was a screaming laser beam over Mitch's head that could have been 3 if I wasn't out of shape and being wary of the legs.

We never could really get a rally going, and I bowed out after giving up a sizable number of runs in the 6th, although the score was 6-4, so that's a decent ERA outing, per MBC.  New Greg came in and threw well, but had some trouble finding the dish, and the game slowed down a bit.  He still was able to strike out a few.  Phelps came in to mop it up and did what he do.

Rojas took over for Sean and was looking real good, had all of his stuff working.  The sun got pretty brutal around the 5th inning, and it became a crap shoot every time the ball was hit in the outfield.  If it got above the bleachers you had a chance of seeing it, but if it stayed low, never see it.  The homers went into the 9th with a deficit of 9-6, but never could get it going and with a K of yours truly, the game was in the bag for the visitors.

* It was a great game, old style MBC, no drama, no problems, just a bunch of folks enjoying the game.

* Thanks to Bob, Adam, Greg, and new guy for catching

* New guy was McG's kid's baseball coach, but he was a kid himself, compared to the mean age of the MBC, looks like he knows what he is doing too

* Our team had two dropped pop ups in the infield, in the same inning, Elvin's new nickname is "Two Hands".

* Rich had some nice plays at SS, and some real big overthrows to second

* Adam converted some real stinker throws into outs at 1st.  As usual.

* I played SS at the end, and had Richie picked off 2nd by 10 feet, but Brian didn't see me and Nick Smith hit the ball right where I would have been if I had just left it all alone....dammit!

* Mike Lattig played a great 2nd base all day

* I had Tony and Greg's number all day, but no one else

* Dennis came up big with two strikes to spark his team to rally, nice piece of hitting!

* New guy about took my foot off with a line drive

* Jay came out, had a hit, but after field testing, is looking at long term rehab for his foot.  Take your time Jay, it's the only way it will heal. Don't worry, the game isn't going anywhere.

* For the record, Brian Phelps worked at Straw Hat Pizza longer than Aiden has been alive....

* The visitors stole every base they could, that might have made the difference.

* Bob got hit with an overthrow at first, which we all agree still counts.  That happens at West Sunset about 400% more than anywhere else

* Rich got hit in the spine, which we all agree sucks

* Daniel had a nice 2-strike hit

* Richie had a real nice hit as well, on a pitch I was trying to bust him inside on

* I think someone hit a triple

* No broken windows, but a foul ball went into a backyard, and hit something brittle.  Sounded like a dead tree branch snapping.

* New Greg beaned his buddy, always funny when that happens.

Thanks to everyone who made it out, for making it an enjoyable game!

Not sure where we are next week, thanks to all that volunteered to pony up for the windshield, if needs be.  Someday, it will be needed, I am sure.

Having a baby is a great thing, richly fulfilling, blah blah blah.  And while it is a great thing, its not the same kind of great thing as having a really solid day at the plate, or being able to put your pitches exactly where you want them, or hosing some runner at the plate from the outfield.  Maybe I just miss playing ball.  In any case, there was a game on Sunday, above the minimum attendance again.  Here with a recap is Mike "Hit Machine" Lattig:

The day started out warm and balmy with some nice cloud cover - which may have contributed to us staying at a reasonable 10-on-10 for the first time in a long time.
Two old-timers took to the bump to get things started, with Greg firing for the home squad and Johnny doing the honors for the visitors. To Greg's dismay, that meant he started against a top 4 of Mitch, Johnny, Rich and Lattig (as I go third person for a minute...). Not the lineup he needed to face coming off the error-induced drubbing he took a few weeks ago. And sure enough, we quickly jumped to a 3-0 lead in the top of the 1st.
Johnny, on the other hand, seemed hell-bent on turning in the first shutout that the MBC has seen in quite some time. The one glitch? In about the 4th inning or so that cloudy sky had morphed into a grayish white glare that threatened even the surest of hands and eyes. Yours truly fell victim with two outs and none on, when Adam hit a little humpbacked liner to second that should have ended things, but instead wove its way in and out of the sun before I made a final, futile last second stab at it once it reappeared to my left.
The homers followed with a few solid knocks, and all the sudden it was a 5-2 ballgame... But that's all Johnny would yield until an inconsequential ninth. Between then he got help from Jason's ability to fend off the sun in center, Rich's ability to glide around at shortstop and fire balls to first, and Mitch's ability to suck up anything  hit his way, including a spectacular sliding catch in center.
And while Johnny was spinning his magic, we kept the runs trickling in. The most impressive knock being Rich's wall banger off of Brian after he looked surprisingly uncomfortable for a few pitches. A fact that Greg ill-advisidly pointed out before Rich launched a 370 foot line drive. The lesson there: Don't poke the bear.
I'm not sure what that made the score, but it was a lot to 2 before another 2 out rally in the 9th led to 3 or 4 runs for the homers. And, as seems custom and since it was a mere 5:20 when the 9th was completed, we moved on to the 10th where both teams got a couple of runs but nothing of consequence occured...
Lesson there: Sometimes 9 is enough. (Ed. note: Some of us would play through to Monday morning if given the opportunity, but I know I may be in the minority here...)
I'm old and tired, so I don't remember many details beyond that. A few for the history books and blooper reels:
* Dennis fell down while backpedalling to catch a pop up, but his achilles was fine.
* There were at least 4 balls hit to right field off of Greg that should have been caught, but were lost in the sun and fell for 'hits'. That seemed to be Rich's gameplan until Brian came in...
* Speaking of Brian, he lasered a couple the other way, proving the value of "Hit it where it's pitched"
* Johnny and I connected for a strange 4-1 putout of Greg on a ball that seemed destined for right field. Which proves the value of the pitcher covering on anything hit to the right side.
* We all made it home safely with another game under our belt. Which proves the value of knowing your limitations...

Dennis "300+pints and counting" Briskin had his own description of his swan dive:

Dennis playing 2B backpedaling for a popup, hitting the grass edge, the ball grazing his glove as he tumbles ass over teakettle. That batter eventually scored. Injured? No, just embarrassed.


AOY 2011 Brian "Lefty Stonez"Phelps had these gems to contribute:


* Greg vs Johnny, Johnny donned a #75 retro Mission jersey and pitched like a retro Zito.

* Once again the sun played its part. I nearly caught a ball, hit by Rich, right near Dennis after he lost it in the sun. I also could have made a play, from the mound, behind 1st base after Dennis and Adam lost a popup in the sun.

* Greg made a Willie Mays catch after taking the fateful first step in.

* I had a 15 pitch battle with Rich. After 14 pitches in, Greg (catcher) says "I've never seen you rattled". After tapping the glass, Greg calls for a fastball and Rich puts one off the wall. Thanks Greg.

* The Homer's defense let this one get away.

* The new Greg murdered the ball. One went over my head, so I went oppo the next time up and put one over his head. Then I pitched to him and he crushed me.

* The Visitors had a murderous lefty lineup. Rich, Lattig, Rojas.

Ed. Note: One final aside to the league players, please remember that this game is the only one that most of get to play for the week, and we would like to be able to play as much as possible.  This game, while not registered in any official capacity, also isn't a league training session.

Courtesy of Nick Smith, here are the pics from our annual BBQ. 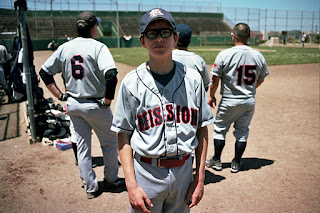 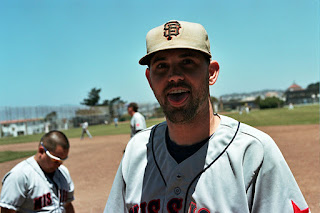 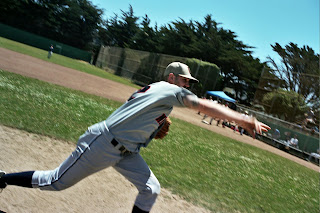 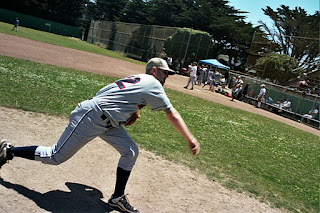 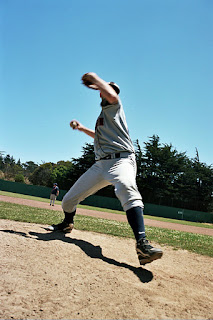 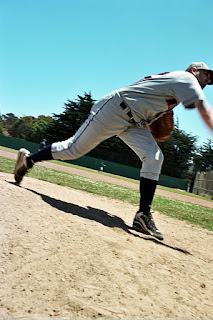 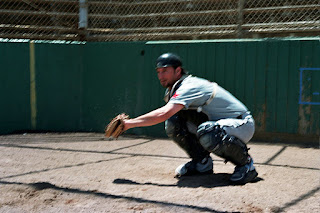 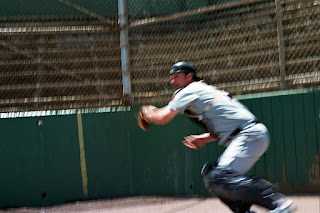 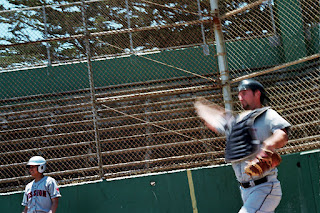 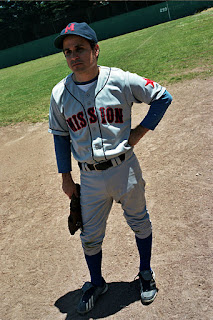 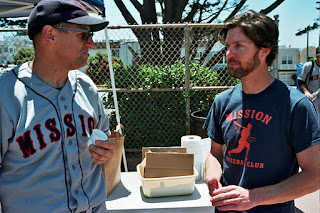 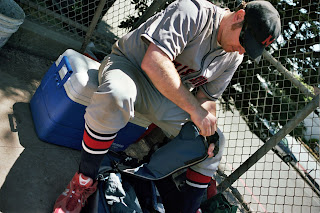 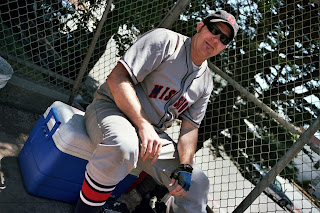 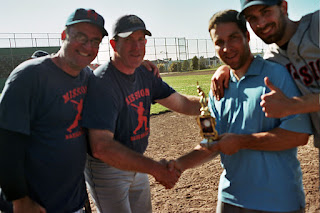 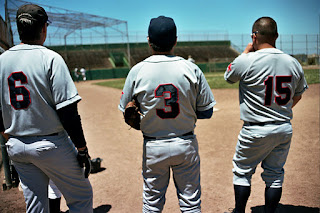 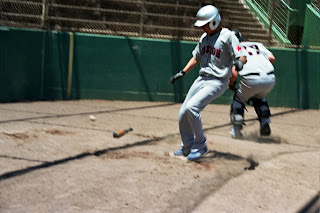 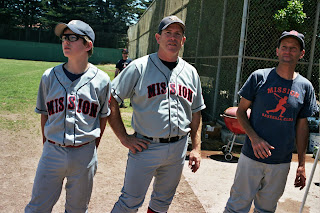 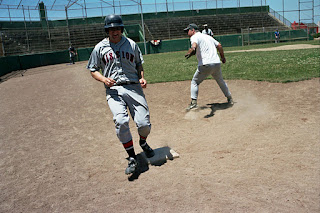 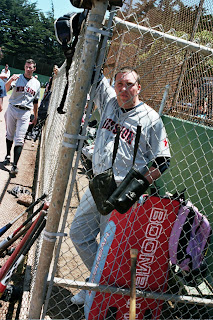 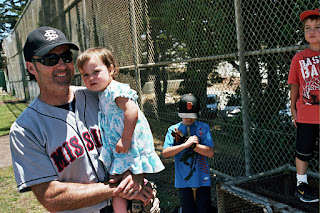 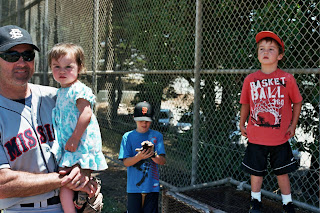 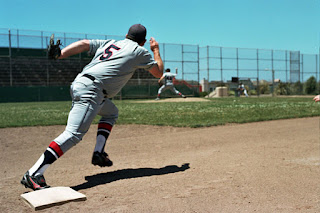 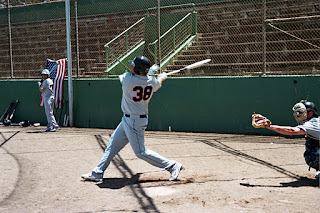 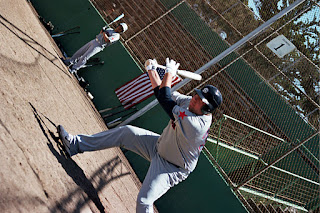 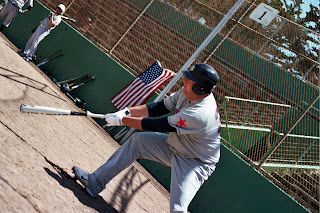 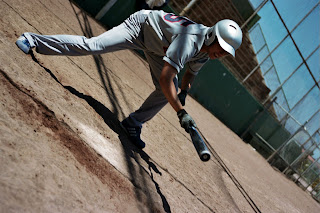 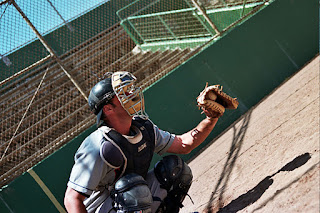 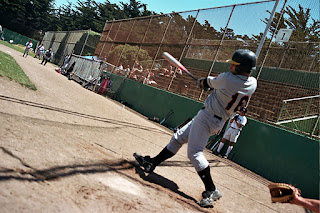 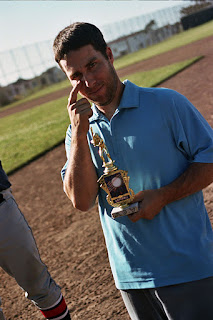 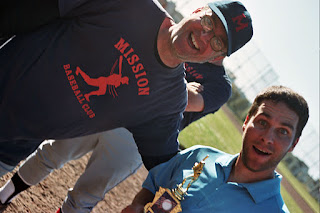