It's been a great run at the mystery field in question, but the rumor is that we will have to move on and start getting permits again.  So, remember all those funds you have been stockpiling for the permit costs, right?  In any case, it was a great game if it was the final game.

We had 17 hearty souls and a beautiful day, and I mean beautiful!  Sun shining, a little too intense some might say, a light breeze pushing the ball to right.  Sean started for the visitors and Sonny for the homers.  We jumped to a quick 4-0 lead, which surprised us more than anyone, and we held the line for the first few innings, 4-2 as we entered the middle innings.  Which was a complete mystery to everyone as to what the inning was.  We went back and forth on if it was the 5th or the 6th for a while, all I will say is that I had 3 at bats at that point, which felt like a lot for that much game.  But hey, who doesn't love more baseball?

The homers mounted a comeback and tied up the game, on the heads-up play of Chris Powell, who sprinted to first on a dropped swinging strike out. Greg couldn't get the throw off in time, and the 3rd out turned into another opportunity.  It had a been a real journey that inning to get 3 outs, and when the ball skipped at first, the last remnants of hope left Sean's body and he collapsed on the infield like a punch drunk fighter who had finally lost his legs.

Sean came out after 6 and I came in to throw 2 innings.  I never felt comfortable, but didn't serve too many up, other than the ones I tried to serve up, I really wanted to see someone put one over the fence.  Sonny bowed out to Mike N and John Mcg mopped up the 9th. The homer's comeback was short lived, and we sparked a big rally on Mike N., putting up 6 runs in one inning.

Unfortunately, in the midst of our hitting, Tony took a pitch to the thumb and it got squashed between ball and bat handle.  It was an impact wound, and bleeding pretty good, but no joint damage.  Dr. Greg got out his first aid kit and patched him up quickly, but Tony was done for the game.  We were down to 7 players, and borrowing two outfielders, which conveniently seemed to be Chris P and Mitch a lot of the time.

We started to pile on the runs, and by the 9th inning, the score was 13-6.  Greg felt he had a decent chance of blowing this lead, and true to his word, the rally of the 9th was a great one, though the deficit proved to be a little too big and the final score was a impressive 13-11 win for the visitors.

* No one hit a homerun at the field, but Chris P. came close twice, one hopping the fence, he ended the day with 2 triples!

* We had a number of beautiful defensive plays that resulted in no outs.  Great throws to first that the runner just beat out, and including a double play attempt, where both runners were safe.  It was clean, just not in time.

* Gaspar with the aluminum is beating the Gaspar shift, and pulling the ball now.

* Lattig made a awesome stretch at first to get a third out and also great play on a ground ball to the hole, and got off a perfect throw to Sean, who remembered to cover....

* I had to catch a ball in left field for the first time, and I literally didn't have to move which was the worst part.  I almost started moving just because it didn't seem real that I would just wait to catch it.

* We almost had a nice play at home

* Baserunning continues to be our weakness, I think there were two innings ended due to people not knowing how many outs there were

* For the first time in a long while, I was 5-5, with 3 singles, and two doubles (though the 2nd double I never made it to 2nd base, due to my broken down running, does that count?).  My hits spanned the spectrum of what can be a hit: the all-arms looping line drive over third, the hot ground ball between SS and 3rd, the "hit it high" in the wind and sun, and it falls untouched, the opposite field power alley (probably due to being behind the pitch and swinging a 50oz bat).  It felt great, not sure what has changed, but I will take it.

* One thing I will not miss at the field is that travesty of a mound.  The landing hole is bad enough, but the steepness of the mound makes the follow through a balancing act.  Give me St Mary's any day of the week.

* The sun was brutal, but this time for left and center field

* Mitch, Powell, Sean, Nate, just some of the people who made great defensive plays on a tough day.  Special thanks to Mitch and Powell who made them while covering defense for us, crushing the dreams of their won teammates.

* There were plenty of hits to go around: Sean, Powell and Elan all had triples, Mitch, Anna, Gaspar, Greg, Dan, all were racking

* Remember to call those pop ups. 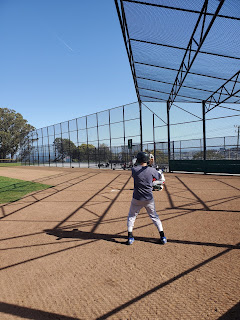 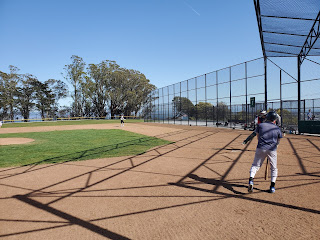 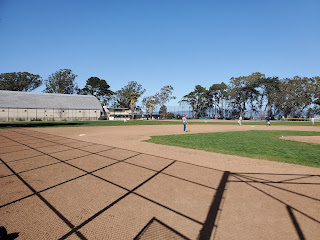 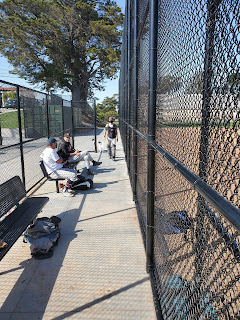 Beautiful day for a baseball game. The Sun was out, the wind wasn't blowing too bad, and we had 25 people out.

Fact we couldn't seem to get a base runner past 2nd base. But still beautiful day and we were still playing Baseball.

In the very 1st inning we managed to turn A 6-4-3 double play which was amazing and also got us out of a jam. I bellowed like a moose on the mound with the excitement and pumped my fist like Mad bum getting all worked up. Double plays seem to be both our curse and our saviour for the rest of the game. In fact I think we had 2 more double plays, both of them on line drives where we doubled up a runner. We also had about 3 opportunities to turn regular double plays and we managed to muff every single one  of those opportunities. We didn't even get one out.

Visitors on the other hand were turning plays and making spectacular outs at every turn. We slowly realised that we were going to get hammered in this game. Not just because of the stellar defense but the offense. I think we need to examine closer the lineups before we start. There's no reason that Lattig, Mitch, Chris p, Phelps, Rich, Ana, Mike N, Dan, and Elan should ever be on the same team.

I ended up throwing 5 and I didn't pitch too bad. I think I had one strikeout the very 1st batter of the game. But it felt good and I wasn't in a lot of pain so chalk that up as a win. Sean came in to relieve me and looked much more on point. However our defensive woes continued and the runs piled up. At one point we thought it was about 14 to 1, turns out it was only 9.

To add insult to injury, Liam came in to fireball us to death and work on making a bunch of middle aged people look even sadder than they are.

I left in about the 8th inning, to head home and see the end of little Satch's 1st baseball practice. From what I understand, our team made a valiant comeback ,at least by our standards, and made a show of it in the last inning  scoring some runs the final score being 9 to 6.

* it was a very fun game even if it wasn't a pretty game.

* Bob after muffing yet another ground bawl and injuring himself, looked at me on the mountain side just shoot me. To which I responded you think I'm gonna waste a bullet?

* Hard hit line drives all day from the visitors.  Nick w. Made an snagging snag of one of them in a tight spot

* Hr made a dynamic throw from the outfield to hold a runner.

* John McG had a real rope, that turned into a round tripper!

* I hit Anna with a slow curve which I felt bad about,  though Greg said I didn't hit her as much as I thought I did

* The visitors hammered the gaps

* Bob was hurting from his knee and asked for a runner,  Nick W. Who has two bum ankles went in for him.  That's the MBC in a nutshell.

* Mike made a great grab at third to start a double play.  Unfortunately that didn't work out.

* Anna made a fantastic scoop at first

*We realized that we had no margin for error,  the visitors also had team speed "Team speed for crissakes..... quoth Earl Weaver "on their side.

* I think Dan put one on the warning track in left,  we'll get there some day.