Well of all our games that was by far the most recent.....

The summer doldrums continue,  though unlike last week there was no saving have of late comers,  and we ended up with 10 players.  10!

Once again we ask why we have 102 people on the email chain and can't field a game.  I'm part of the problem but dammit I wanted a game.  What we got was 3 batters and 7 fielders,  pitchers and catchers playing 6 outs. It was something.

I can't say who won,  but Urano and Mike N were the big hitters, but everyone got at least one good smack I think.

James made a couple of great running catches after he muffed one.

JT almost had a great catch and then made up for it later in the inning.

I caught 3 line drive comebackers that seemed to each be harder than the last.

HR had the dirtiest opposite field hit, followed by me.

The score was not outlandish and the defense held up pretty well considering.  The band was out and entertained us.  The 7th inning stretch was whenever they wanted it to be.

I managed to catch a pop fly in front of the pitchers mound,  barely.

There was a double play.

I think we had fun.

There was an honest discussion as to could you tag a ghost runner to start a double play....

I challenged James with 2 change ups and a slider for my only K of the day.

Hopefully more will come out soon.

Satch was off in the West, enjoying a relaxing long drive with the family.  There is a real slice of heaven in Westcliffe, CO, I can tell you... Mike Lattig was at the game, in fact, he was the game as it turns out, and he filed this report.

When Greg hadn’t heard back from the ‘usual suspects’ who take the gear when he can’t, it was pretty obvious that we were going to be shorthanded this weekend. Add to that the knowledge that Satch is up in the Rockies, having Bob teach his boys to hunt squirrel for dinner. And Anna has joined Nick and his family at their estate (or some such) in Maine. And Urano has disappeared. And… well, you get the picture.
And it was pretty bleak as 3pm approached. At first, it was me, Mitch, and a bunch of gear. Then Adam and Mike N trickled in. Then, John and Arson after a long absence. And HR after time away in the mountains… things were getting intriguing. But we still didn’t have a solid 9, let alone enough for a game.

So we bided our time with some infield. Then started into batting practice when, voila, out of the cornfield came the cavalry. Dan, Don, James, Stoner, and Marcy all made the scene. Giving us an excuse to put the bag of balls away and call it an even 6 on 6. Even better, Marcy got on the horn to secure a couple more participants, who arrived just in time for the 2nd inning.

We decided to keep the outfield to 2 so as to reduce the amount of switching and such, which was about the spirit of the game. Really, not one I was going to write up except for… the no hitter.

Sure, it was just six innings. And sure, we were all in a pretty lackadaisical mood considering the turnout and the encroaching fog. But, as I had told Adam when we were warming up, my arm was feeling good. And boy if that didn’t turn out to be true. The slider had a little extra tilt. The curveball tighter and later breaking than usual. And one by one, the week grounders and pop ups piled up.

I didn’t even know it was happening until we came off the field in the fifth and I was planning to hand the ball over to HR. But once we figured out that, indeed, there had not been a hit - just two base runners from errant throws on cleanly fielded ground balls - I had to go out for the sixth.

And right out of the gate, Marcy smacked a line drive up the middle. I thought the fun was over, but Dan had her shaded, fielded it on one hop, and made the throw. Then Marcy’s friend (sorry to forget her name, it was her first time swinging a bat and she made contact both times up!) came up and knocked one right back to me for out number two.

Up came Mike N, who had the only really hard hit ball of the game leading off. But it was a liner to left, where Mitch was waiting. For the first time all game my command faltered, and Mike had to wait out the first two walks of the game before grounding one to short - which hopped up on dan and went off his glove then chest. A ‘hit or error’ debate ensued. And two pitches later, after another week groundball out by John, we decided it must have been an error. The no hitter was complete!

Same time and place next week. Hope to see more of you there!
Posted by S. Paige at 9:28 AM No comments: 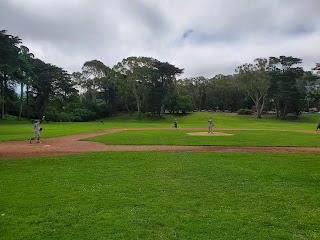 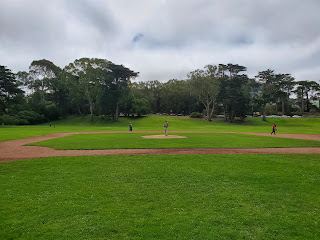 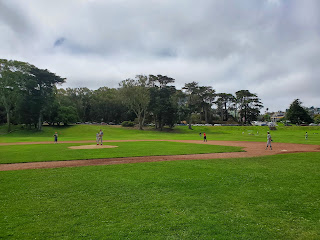 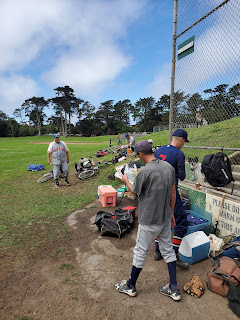 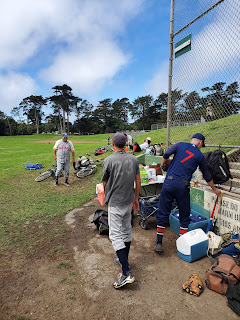 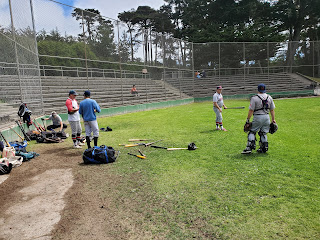 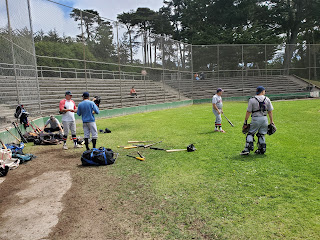 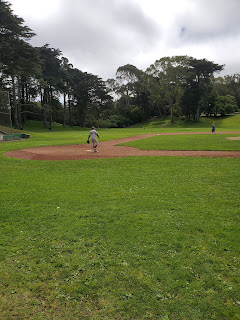 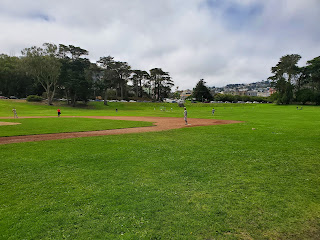 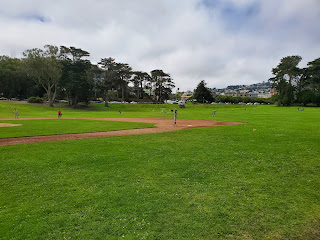 I feel like we really deserved this game, last year's 4th of July came a and went with very little fanfare.  No BBQ, no beer, Don just walked away with another year of the AOY trophy.  So this year was nice to have something familiar, and a great game to boot.

Yes, I said game.  We ended up playing one long game with an intermission.  Or maybe we didn't.  It was a fluid kind of thing.

Greg started for the visitors, and Sonny for the homers.  Greg had his 17 Reasons shirt on for good luck, and Tony had his custom made MBC uniform.  In general, the visitors had a lot the more mature players of the MBC, but also a smattering of the new crew.  The homers definitely had the advantage on paper, and it turns out, in reality too.  They scored first and often.  they also had every lefty just about, and they seemed to hit in bunches.  The visitors was more of a happy go lucky kind of thing, we scored our runs the old fashioned way, by hoping the other team made errors.  Tony followed Greg, and I think Phelps and McG and Mike N. followed Sonny

I won't attempt to recap the whole thing, mostly because a week has gone by now and it is hard to remember, but I can say that it was a great first 9 innings, and we managed to the tie the game up in the 9th, only to let it slip away in the bottom of the ninth thanks to a long drive, a fast runner, and a veteran player in left field.  First pitch, Sean blasted to left, over Bob's head, and enough away that he had a triple for sure, and a homerun once we realized that it was going to have to be a 3-man relay to get it home.  He deserved it.

BBQ was off the hizzy this year, thanks to lots of healthy side salads, Anna's cornbread, which was used to bribe a park official who had a beef about our charcoal grills, a tri-tip from Grass Valley Will, and lots of good times sharing laughs and food with friends.  I know I wasn't the only one that was grateful that we are able to start getting life back to normal-ish.  I hope things continue to go in that direction.

Awards for this year: Anna Marjavi was our walkaway Rookie of the Year, as she comprises all that we value in the game, drive, spunk, good sense of humor, regular attendance, and the ability to reliably catch, throw, and hit the ball.  And as usual, she also suffered from a frustrating game of defense and offense all day.  It never fails, win an award for great play, have a not-so-great-play day.  Happens all the time, but no matter, big congrats and thanks to Anna for her spirit and play over the last year plus.

The Asshole of the Year has been wrested away from Don, who didn't even have the guts to show up this year.  The AOY trophy went to a man who has personally contributed to the degradation and ruination of the great game of baseball, our own pitcher's cheat wholesaler,  Pelican pine tar stick producer Dave Phillips.

The 2nd game got a little sloppy as it usually does, and we lost a few players without a 2nd game reinforcement that we usually have in years past.  I started for the visitors, and Sean for the homers.  Sean was pitching his ass off, and we were not able to do much.  I had to leave in the middle of the game, and I don't know if they played the full 9, or stopped at 7.  The game was suffering from severe torpor at that point.  And still the most fun that anyone can have.

* Big hitters for the day: Will, Dan, Sean, Chris P., Mike L  All of these guys hit the piss out of the ball, I think Will had about 5 doubles.  Dan might have had the longest drive to right center.

* Double plays helped both teams out of jams

* John McG had the hardest line drive of the day

* More than one pop foul to the catcher was caught, a difficult play

* WE had a lots of fans, mostly to do with Adam's daughter

* RBI Ed was on the scene and even managed to wash his uniform some time in the last 12 months.

* The game was changed by a suspect fair ball call down the left field line.

* I managed to throw out a runner at first from right field, all while being trucked by Adam who was playing second

* Doc came out and umpired a spell, and then faded back into the corn field

* Knuckleball was working pretty good at one point

* The weather was the usual mixture of heavy fog, wind, 10s of sun, etc.

* Daniel D. drove up from Monterey, and got his doubleheader fix

* Dennis saw the panic of the week before when no one showed up and decided to bolster our numbers.  He is post-back surgery, so thanks to him for his willingness to sacrifice himself

* Nick Smith saw the old 2018 sign up sheet that still listed him as bringing a Weber and was guilted into coming.  By any means necessary.

* At one point we had a little league style play where everyone ran after the ball, abandoned their bases, allowing the runners to advance.

* Mental note, maybe we need to bring either exclusively propane from now on, or a metal bucket to assure any rangers that we will be disposing of coals properly.

* I apologize if I missed any other plays, email me and I will add

Thanks everyone for showing up, and staying safe.  I love this game so much, it's great to see if survive and thrive.