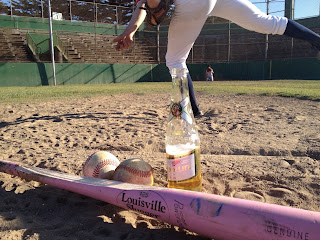 Sounds like it was a great little game, lots of new guys, some heroics, some spills, thrills, and one temper tantrum ( a new [Pink] bat would be a nice gesture.)  I will miss the next three games as I hop the pond for a 90th birthday, left to get my sport watching EURO2012 surrounded by a bunch of headbutting, pint-swilling yobbos.  Here with the recaps are Brian "Lefty" Phelps and Richie "Leadoff Man" Garcia:

Oh man. Where do I start. It was an amazingly hot summer day. Felt like October.

Phelps started for the homers and Carter for the visitors. I had a no-hitter after 4 complete. But there were runners. I walked Cater 3 times in one AB and a couple of errors squeaked through. Then Adam said it out loud. It was 5-0 until the 5th happened. About 80 pitches later it was 6-5. Eventually 10-5. Not sure what the final was. But Greg came in to relieve me and was fabulous. Striking out a few and even getting some comebackers. He was an out machine. Cater crushed it going all 9 innings.

I didn't pay alot of attention to the details of the game.

-John McGrath made a nice, sliding scoop behind second base flipping to Elvin for a force out at second.

-Bob threw me (Richie) out at first from right field! And I was sprinting out of the box.

-Daniel made a great catch diving catch in left, after volleying the ball to himself.

-Carter probably set a record for put-outs by a pitcher nine innings.

-Elvin made a great diving catch at second which probably saved a run.

-Duane finally put an end to the pink Mother's Day bat by slinging it against the concrete back stop after a strike out.

-Bob laid down a nice bunt when a ball that was thrown behind him inexplicably hit his bat and rolled fair. I have never seen that happen in a game anywhere ever.

-Carter got the complete game win.

Yo, to set the record straight:

The bat was MINE and I threw it WAY more out of frustration of someone CRACKING it and not telling me. I realized during the at-bat it was cracked and got instantly pissed off.

Why I got pissed off, you may ask? Well, because it was only the 2nd game I brought it out to (Ed has a pink bat too) and I gave a heads up to several people that I wasn't too into it being used as it's my last wood bat I own right now and have had people crack my wood bats before by using them.

ANYWAYS thats why. I have no problem with people using any of my gear, including my metal bat but I am going to start being stingy about my woods. Sorry.

Bring on the AOY award.

So, when you break something, admit to it, I know no one likes to spend money on a broken bat, but no one likes to have their bat broken either.  Maybe we can start a bat pool to buy some general all purpose wood bats for the team to enjoy?


Enjoy the sun while its here.

Another beautiful day for a ball game, and I was astonished that all of helpful tasks throughout the week allowed me to join the MBC for a final hurrah before jetting off to the land of cricket and gin.  We had 20 for most of the game and then the addition of Daniel and Robin by the middle innings gave us a littel extra rest for those who needed it.

Satch and Sean squared off in a classic pitchers duel, and for 6 innings we puffed and passed the game back and forth, neither wanting to let up.  Sean, pitching for the home squad, was back from an absence and looking good.  However, did not have overpowering stuff as we have seen in his returning games of the past, but still managed to K a few.  It was a warm and lazy day and Satch threw just like that, lots of junk, about 70% speed, and had good luck to the tune of 5 more K's.  Both pitchers worked out of some real jams, it is nice to have a tight ball game sometimes.

We were locked at 1-1 for a time, and then visitors took the lead, 2-1 and there it remained for Satch and Sean.  We bowed out to make sure the sitting time was fair to all and Will and Phelps came in, the game changed, the defenses changed, the homers exploded for 5 runs!  It proved to be a day of chipping though, and the visitors worked through the innings, a RBI situation here, a run turned into a couple and then a couple more, and before we knew it we had retaken the lead, and the score stood 7-6.  There is remained once more, with new pitchers John Carey and DJ Greg closing the door and mopping up.

We managed one extra, to take in the sun, but the momentum of the game had slowed to a grinding halt around the 8th, and we took it as a sign to enjoy the time we had spent and not try to extend beyond.

* We were happy to welcome John Carey back from his first year of Cowboy boarding school, rumor has it he threw a complete game shut out, congrats!  He had an excellent bunt in his first at bat that was only foiled by a chance perfect throw

* Robin got her first legit MBC hit, a solid up the middle single.  Nice work Robosox!

* I killed the ball to left again, not sure why I have all of a sudden been able to pull the ball, except of course with John Carey, who I opp'oed.

* Tony Rojas became Willie Mays for the day, snaring flies all over the outfield

* Phelps was ruined by the 4 inch rule, as in, he was 4 inches away from catching about 5 fly balls, really gave his all though

* Greg put one in his classic spot, right behind the third baseman

* There were a lot of doubles, Sean, Adam, Jay, Satch, Lattig, Johnny, Nick, Phelps, who else?

* Ed was robbed of a RBI situation, again

* DJ Greg brought out some sort of hollow cheater wood stick, glad to see the eye is better.

* The defense really made the game, both sides had a nice spread of quality plays

* Jay ran over Will at third, which is not acceptable, on a steal attempt where the ball was 3 seconds ahead of the runner.  Slide or slow down and take the tag.  This is the gentleman's game, not football.

* Chris Powell made a great catch in short left, standard over the shoulder play we call the Powell Special

* Hit and Run for the visitors worked perfectly, twice!

* Bob was hit in the foot early, official, and then almost hit again by his own kid!

* Sean likes to pick off from the wind up, just so you know

* Phelps took home on a pass ball for the go ahead, which was awesome

* Decision of those present:  Try for double header on July 8th, if not, we may have to do it on the Wednesday, July 4th.  Please email me or Bob with pressing concerns about this.

Here's a nice little article on those who lived the dream for one game, or in some cases, three defensive outs.


You know we just don't recognize the most significant moments of our lives while they're happening. Back then I thought, well, there'll be other days. I didn't realize that that was the only day.