It was a glorious return to one of the lesser favored fields in MBC's arsenal, and true to Swampy's demeanor, one of us was injured before the day was out. But we had 22 players, and some interesting plays to make the day worthwhile.

Johnny Bartlett was hungry to start and was on the bump before everyone had even warmed up. His defense spread out behind him and then before we knew it, 9 runs had been scored. Yeah, 9. Bloops were popular, as were seeing-eye ground balls, and the occasional misplayed pop up. Johnny kept his composure but we could tell he was not having a very good time. Satch started for the visitors, and set down the homers before they could answer back with any runs. A meeting of the minds decided that a trade was in order, and so Mike Lattig was dealt away to the home team for one Mr. Doc Magrane. We decided to keep going and see how it went. The homers finally got on the board, but quickly the visitors sprang back to take the run away and we entered the 3rd 10-1. And we somehow we stayed in the 3rd inning for about two and half innings, no one was quite sure what happened, but I do know I had thrown 6 innings by the bottom of the 4th.

In any case, the homers kept chipping away, and our big time offense slowed way down to the tune of 2 runs, and by the end of the 7th the score stood 12-7, and Sean was on the hill treating us all to what he does best. Satch gave way to Tony Rojas who threw some dynamite ball, working his new changeup and breaking stuff in. He also had a sly pickoff that saved us from the beginnings of a rally. By the end of the 9th (11th) we were all pretty tired, Greg was on to close it out, and a new guy, also Greg was in for the homers. The sun was in everybody's eyes, and windblown and dried out, we recorded the final out and put a final of 14-8 in the books.


Saturday in the Big House, squaring up with some killers, Sunday in the Marina, hopefully with some parolees (if the bums show up to enjoy the day)

In case you were wondering....

Oh glorious baseball, how do i love and cherish thee! How i have missed thy sweet embrace and dreamt long for each Sunday to be today.....

A long time coming, especially with our frustrating Sunday at the Marina, we could not ask for a more perfect day this past Sunday. Ye gods the heat! It had to be at least 75 degrees which of course, is like a sauna to us San Franciscans. And not a cloud in the sky, gentle wind that died down and really reminded us of how odd it was that it was still as hot as it seemed to be. We started the whole day off by pissing on the parade of a huge bunch of Sloshballers who had already established the keg at 2nd when Greg and I got there. We showed our permit, they offered us booze and girls in trade if we would let them use the field (their chief negotiator seemed like she might have tapped the keg a little earlier than the rest). We countered that we had been waiting for this game for quite some time, and frankly, there was nothing they had that we would take in trade. They took it well, and ended up playing above us, screaming and drinking for the next two hours, sometimes it sounded like they were cheering for us....

We had 22 by the time everyone else showed up and the breakdown of the teams was almost a old Mission squad versus the new Mission squad, with the exception being Gaspar and Mitch and Adam (salty dogs all three) who were on the visitors.

Satch started for the homers, and quickly gave up two runs on some questionable defensive plays and a few poke jobs. No problem thought we, and then promptly went down 1-2-3. Brian the lefty was facing us on the bump and kept his pitches all around the strike zone and us off balance and stinging. Satch led off the 2nd, fisted a ball for a single, took second on a error, stole third, and came home on a clean hit, with another two close behind. It was our game 3-2. Then the visitors scored two more, and it was theirs 4-3. Back and forth it went with both teams doing some dynamite defensive plays to keep the lead or maintain the tie.

Brian bowed out in the 5th and Satch fell off the mound in a heat stroke after the 7th. Sean, another lefty came in, fresh from a band tour (probably spent every night wishing he was playing ball I am sure). He had some zip on his fastball from all the rest he probably got, but had trouble with consistency. Still, he got done exactly what was needed. Johnny Bartlett took the bump over for the homers and did a fine job with keeping the team from getting too much of a insurmountable command. So it went, and just when one team would thing that they had the lead, the others would take it back and we would be right back where we came from. The game was down to the wire, the visitors stormed back to tie up the game in the ninth, and our chance to win was turned away viciously in the ninth, as we stranded runners on 2nd and 3rd with no outs.

The visitors, fresh from the greatest of all turn-aways, went straight for the throats of us all, and ran two runs across the dish, and then bolted down the coffin lid in the bottom of the 10th, we all collapsed in the dying rays of the sun, and declared the Sunday a success.


The Conundrum for the Day:

In the bottom of the ninth, with one out, and men on 2nd and 3rd, Mike Lattig came up. Now this hasn't ever been an issue, but Mitch was making sounds for Lattig to be intentionally walked, to set up the double play and to take the big bat out of the box. In theory this is what you are supposed to do in baseball, but we have always been a hitters team, where everyone gets the chance to swing. Walks are only at the discretion of the hitter, in cases of three or more BoB in a row, or getting hit with the pitch. It all worked out, as Mike popped up to Mitch, and then the last batter struck out, but still Mitch raises a good point. We countered that if we intentionally walked Mike and the next batter got four balls, would the winning run count by being walked in? Certainly not the way that any of us want to have the game end....Thoughts anyone?

It was great to see you all out there, hope and pray for another day like Sunday, 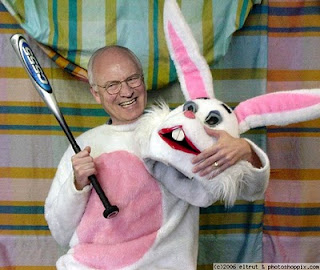 I don't know what it means.....but watching that rains storm was not what I wanted to do for Easter.

Can someone explain how we go from 26 to 10 in less than a month? Probably the most amazing day we have seen in a while, and parking problems aside, a great day for baseball. And here we were us stalwart 9 (Ben showed up 20 minutes before we quit) ready to play, and this is what we get. Showed up by softballers. SOFTBALLERS!!!!!!!!!!!!!!! They had cheers, and spandex, and homoerotic screams from the right fielder, and the best we could do is come up with some slapdash "game" that I coined U.N. 9.

The rationale being that each of us was our own country, and got three outs to hit with, and as long as we kept our ghostrunners moving, we could keep hitting. It wasn't bad. It wasn't good either. We got to see a lot of pitchers, including the new right hand sensation Mike Gaspar, and for those of us that hit a bit ( I couldn't miss! Why does that happen in batting practice?) it was entertaining to talley ghost runs. BUt come on people!

I know, lots of legitimate excuses too, vacations, camping, arizona, surfing, band tours, but Jesus, what's the point of being on the email list and never showing up. and I realize that i am preaching to the choir here, as those guys probably don't read the blog....