I was a tad late, owing to other duties, but I made it out.  The weather was beautiful, almost too much so.  It has been a long time since I experienced 91 degrees in SF.  The park was alive with lots of people, and the olde tyme baseballers were doing their thing.

When I arrived, it was 0-0 in the 4th inning, and Brian P and Sonny were having a strong back and forth.  They both looked pretty good to me, and continued to do so, though our team gave up some unearned runs in the 5th.  Just. Could. Not. Get. A. Handle.  Mike Lattig, by his own admission, had a very off defensive day.  Not what one wants to hear from the 1st baseman.

The visitors scored a few and it was 3-1 when we had to give up the field.  Greg would have been proud in the even-handed non-dickish way we did so, packing up at the stroke of 5 to give the All-Stars their chance to play their game.  The olde-tymers were almost down with their game, so we hung out on the grass for 20 minutes and waited for that to be done so we could finish.  It was leisurely.

I had pitched the last inning on the old field, and the first inning on the new field.  I have to say I preferred the mound of the East field, which is completely backwards, given that it is the JV Field of the two.  Arms felt good.  Hip felt bad.  Another day in paradise.  I did get out of a bases loaded jam, with the help of a revitalized defense, so that was awesome.  And I struck out Loren, who was even later than I was.

Chris P came in for the 9th, and did a great job.  We went into the bottom of the 9th trailing 6-1, and I think that we scored at least one, maybe two off of Nate, who had come into pitch after Sonny.  But too much to surmount, and on a replayed third-out (Tony couldn't let the game end on a questionable 3rd strike call, and it was redone, this time he soft-popped it to Urano).

* Great showing, and what a day for a ball game!

* We lost Mike N to a injury at 1st, it was a strange one, he was going back to the bag, and suddenly he was on the ground, looking like Buster Posey post-Cousins impact.  I guess he rolled his ankle, so hopefully it is minor. Get well soon!

* Lots of fair balls down the left field line

* Brian P had a booming triple, and I mean booming, this thing was soaring over James' head

* Before I got there Mitch apparently made a fantastic full extension diving catch to rob a hitter.

* Chris P continues to hit the hardest balls, but right to someone's glove

* Abe had a classic sac fly, something that doesn't happen too often in our game

*  Thanks to everyone who played and substituted, we had to swap out players with all the different things going on, people leaving, more coming, etc.

Stay cool.  This weather reminded us all that I have proposed an MBC East Bay game, I am still working on it, maybe July-August?  The good news is that the new solar cover on my pool is actually doing its job. 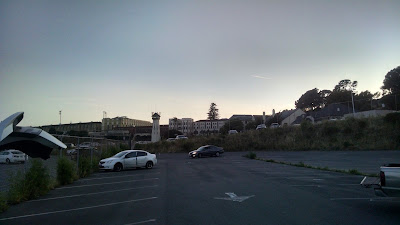 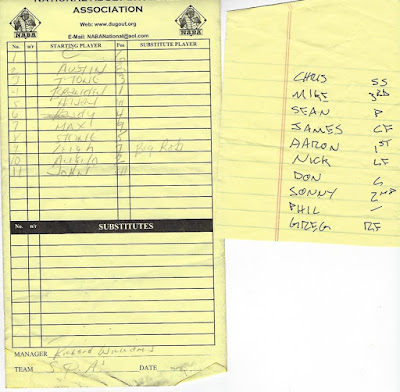 We were looking to have a better game than the opener, which was a hot mess.  To that end, I think we were very successful.  We still lost, but that is also kind of OK.  Mitch and Abe both were last minute cancellations, so we ended up with 10 on the gate.

Sean got the start, and the first three innings, we had a real great game, lots of base runners left on both sides, and heart pounding action.  Brandon started for the A's and he was just as good.  After the first third, the score was 2-0.  We thought that we would have more of a chance with Brandon not being at SS to rob all our hits up the middle, but he just fielded all of them from the mound.

Then we had The Inning, and boy did it get ugly.  The A's put 7 runs on the board, and they were not all earned by any means.  We booted, we dropped, we overthrew, we underthrew, we threw away.I In the midst of all that, the A's also hit at least one home run and a multitude of doubles.

So there we were, the score 9-0, with a lot of game left.  And for once, we didn't give up or fall to pieces.  It always is the case that you just try to score one run, and good things happen.  We had to fight for that one run though, after we were almost hosed (again) on a call at first that was so egregious that we could not let it lie.  We appealed to the home plate umpire, and after a bit, he called the runner safe, and our run counted.  From their we built a nice little comeback, scoring a few more, and holding the line.

I came into relieve Sean and gave up two runs, then Sonny came in and gave up a few more, and then Mike N. (I think) but were still in the game, even if it was 11-5 at that point.  The light was fading but the players wanted to keep going, mostly so that they could get another at bat, but we managed to get out pretty unscathed, and headed into our final inning looking at a 13-5 deficit.

Back we roared, and by the time the final out was recorded, the score was 13-10.

* We got fooled with the hidden ball trick at 1st instead of 2nd this time.  Sean and I were in the midst of telling Phil to stay on the base as he walked off and was tagged. Don was base coaching, in theory.

* Chris inherited the Mitch lead off position, and was promptly walked, just like Mitch

* A lot of bad calls: James was very safe at 2nd on a steal early on. We did manage to reverse a call on another egregious ring up at first.

* Don did a great job behind the dish dealing with an uneven strike zone.

* Mike N. gets the Most MBC play award: He got a ground ball at third, two outs, runner on third. Rather than throw the ball to first he tries for the runner at home. The pickle starts but Mike ends up chasing the guy towards home rather than back to the base of origin (as we are all taught). He's getting closer but not enough to catch him, he then decides if he can't get the runner out he'll just maim him instead. He throws the ball at the runner's back, then trips over him as the runner slides into home. Safe. Run scored. Team flabbergasted.

* I managed to get three hits on the day, 2 singles and a ground rule double. Thank God the double went into the dead ball bench area cuz it would have been the most embarrassing single ever. I am not a fast runner anymore.

* The team as a whole did pretty good with the bats. We got to Brandon eventually and the relief pitcher T-Tone as well. Our baserunning still proves to be our weakness.

* James went full Derek Jeter (Boooooo!) trying for a long fly ball, he hit the warning track gravel and then his legs ran into the stationary table in right center, up he flew and over, and onto the ground.  He almost made the catch, but he also didn't break his leg or his neck, so we were all relieved.

* We need to pony up the bread to send Elvin and Mike N. to sliding camp.

* Several of our players had some well-struck hits

* The leadoff hitter for the A's had a double and home run in his first two at bats, both to the same deep part of left center

* Sonny is an assistant coach for A's now, I think they enjoyed getting to hit off of him in a game.

* James did a great job of calling off the other fielders to catch balls, and therefore not have another ugly collision

* The wheels came of for the A's in the last innings, and the catcher in particular was pretty done in.  he made a bad throw on a dropped K situation, and he and the 1st baseman got into it.  After the game the 1st baseman owned up to his outburst and apologized, saying that he is competitive and just can't stand sloppy play.  That is what we call a left-handed apology.  But I think it was good restorative practices for him to own it.

* Nick W. had a rough time in left, the ball pinging around in the fencing.  He also had to negotiate around an errant walker in the midst of trying to catch a ball.

* I hate to say it, but James had a dropped fly ball that may have proved to be the crucial turn of the game.  He sat brooding/contemplating this in the dugout, and working out possible trajectories of how things may have been different had he caught it. My response to all this theoretical scenarios was, "And if your grandmother had balls, she would be your grandfather."  The original Yiddish is "As di bubbe volt gehat beytsim volt zi gevain mayn zaidah."

* There were a couple of high pop flies that the wind played hell with, but Greg and I both managed to secure the outs.  Another one that I thought was foul by several feet was blown back in for a bloop single.  The batter admitted he thought that there was no way it would be fair.  The walls and the wind are a weird combo.

*The scoreboard guys had to dig up all the numbers again when we staged our last inning rally.

0-2 to start the season, but at least we got a good game this time.