Sorry I missed the game, and have been some what remiss at updating the blog. To sum up, the Giants are going to the Worlds Series, and its been raining every Sunday. But it didn't rain a few weeks ago, and the game was a peach, apparently. Here's Mike "Does it All" Gaspar to tell you about it:

It was a great day in the sunset. sun shining, warm, and just a hint of breeze.

When i arrived there was a league game going on and a few mission faithful waiting in the bleachers. i was a little worried we wouldn't get to 14 players. i guess some guys would rather watch baseball than play it. crazy huh?

But a few more dudes trickled in and we were ready to go. mike (last name unknown) started for the visitors and sean for the homers. the home team put 8 or 9 runs across in the bottom of 2nd through a combination of goodhitting, poor defense and a bad hop or two. hate to say it, but it was a boat race from there.in the top of the 7th we decided it was 12-6. and due to the late start we also decided the 7th would be the last.

- giants game on the radio. (remember the braves?)

- lorens' smash to right center that hit the wall on a couple of bounces.

- rick kvoriak's laser beam line drive to left center for a triple. then scored on groundball by crashing into bob at the plate.

- great catch in right by james subbing for the homers.

- big thanks to all that showed up.

nothing worse than 13 guys. not sure where/when the next game will be. (damn rain) but hopefully it dries out for dave j.'s visit. peace out. mg

Thanks Mike, I don't know where the next game is, but we better all be praying for Sun!

I was reading over the Flotsam and Jetsam article, and needed to clarify something. I mentioned in one of the player profiles that the Carlos guy was shot. I wanted to clarify that he told us all this when he came back to play in the game. I realized that it might have seemed strange to be so glib about a shooting, without giving the full story.

I could sure use a day on the ball field tomorrow, but I got me a day's worth of cash, real live paying gig as a musician. Easy Money if you know how to do it.

The Price of Fame 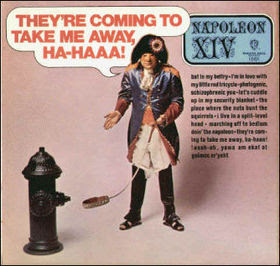 I still am not convinced that people actually read this thing, other than those few who have copped to it specifically. So every once in a while I get comments in the blog from people I don't know. I guess this is what Hemingway felt like....

So the last two comments have been from Anonymous senders:

I am doing research for my college paper, thanks for your great points, now I am acting on a sudden impulse.- Laura

What does this mean? Is there a college paper writing stalker out there that I have somehow wooed with my vocabulary? Do I ever have great points? When do I ask people to act on a sudden impulse? So, Laura, if you are out there, tell me what you mean! Or at least have the decency to call me and leave a heavy breathing message, that's a lot more classy than this online stuff.

Here's the other one, which hopefully is from a real fan of the MBC.

I should digg your article so other people can see it, really helpful, I had a tough time finding the results searching on the web, thanks.- Norman

That would be great, if people actually read this thing. Well Norman, I hope you enjoy reading this blog, I enjoy writing it, and I love playing baseball. And as soon as someone explains what Digg is, I am sure it would be great if we got on it. Anyone?????????

Well, it was a real bite and scratch kind of game, I can say that much.

Between the final game of the Giants regular season and the Bluegrass festival in the park, we were shorthanded to say the least. There were frisbeeists and soccer players taking over our outfield and there wasn't a damn thing we could do about it, since we didn't have anywhere near a game. A large group of late teens huddled up in the bleachers and I was sent over to recruit. I figured with their choice in recreation, that we might have had a chance, or at least gotten one who we could throw in the outfield until he sobered up. They liked the idea, but none of them actually played. Probably went home and played MLB 2010 on their PlayStation. Fucking kids.

We started with 10 souls, enough for a little Caracas 5. Slowly but surely we built on the mess, and with the emergence of Chris, Mitch, Juan and Jonathan, we had ourselves a game. Satch started for the homers, and Tony "Rubber Arm" Rojas took the bump for the visitors. I bowed out after 6 (or 7, we lost track) but Tony threw a CG, and a quality one at that. James came into mop up, and after a little time finding the dish, he seemed to settle in. Ed took another beating behind the plate, unfortunately.

The game itself really was a good affair, we were evenly split, people were playing out of their normal positions, which always makes it more entertaining. We had the radio on, and as the beloved Giants clinched the West, we all took a moment to hoot and holler, and it was universally agreed that playing baseball while listening to baseball is really the ultimate.

It was a high scoring affair, with some great big hits and some troubled defense that always makes for a more interesting match. The homers took a lead into the 8th, after a debate on the true score versus what it should be, but the visitors really fought back, and by the 9th it was all tied up.

Chris lead off the bottom of the 9th, and tattooed a ball to right center, which I tried to get to, but between the height and the wind, it went over my head and one hopped to the wall. He scored easily, being Chris, but Greg and Tony took exception to the game being won in such fashion with a questionable outfielder. Chris didn't seem to mind, and I am used to being accused of shoddy fielding, so No offense taken of course....I'm always up for more baseball.

The homers scrapped for a baserunner, and the final tally came by way of a ground ball over the third baseman's head on an all-fielders-in situation, a fine way to end a game. And there she was.

* Tony pitched a great game and had at least two frozen rope hits off of me, on challenge fastballs.

* Juan and Jonathan came out again, and I believe both got hits, thanks for showing up, welcome to the MBC!!!!

* Mitch, the great outfielder himself, said that Chris' homerun was a "tough one to get to." So it isn't just that I suck in the outfield or missed it on purpose.

* We might need to consider the other dugout, we get a lot of pass balls that could hurt someone. Case in point, the ball that I took in the hand, that would have bounced off my dome if no one had yelled heads up. Or the foul ball that almost killed Juan.

* We had some great situational hitting and fielding

* Also got screwed in a dead ball call, which wouldn't have been a problem, but Adam stopped running, Nick could have gotten the ball in time, Greg picked it up, and then claimed that it had hit the bags beforehand. Which is fine, except why did Adam get to stay at first? Seems like if he gives up it should be like a strikeout in the dirt, no attempt, no base.

* I struck out on a ball in the dirt, a little denouement to the above. Nice pitch Tony.

* And those of you that call me a poor sport....Apparently I won Poor Sportsman at this years 4th of July BBQ. Which is fine if that is the will of the team, but I just have one thing to say....if I won, where's my fucking trophy?

Same place, Same time. Be there. 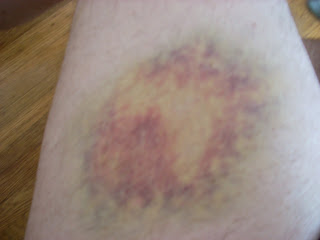 Thought you guys might be interested in seeing the bruise's progress.
Posted by S. Paige at 3:17 PM No comments: