The league guys playing on our field of legal rental were in the fourth inning at game time, so rather than be dicks we took the gear down to Camp Swampy.  Thanks to Sean for sending out the update to everyone, was very helpful in parking on the right side.

Another great turnout, 22 players for the bulk of the game, we were legit at the beginning and had a couple of late arrivals.  Greg started for the homers and Mitch for the visitors, and once again both starting pitchers were great, and both times I came in and screwed it all up.

Seriously, Mitch threw his heart out, and I think he was even getting a little squeezed by Bob!  There, I said it.  But the runs stayed low on both sides. Greg was throwing excellent inside ball, as usual.  He also hit Mitch, which I don't think is completely kosher, but hey, that is just me.

I came in, and the first four batters all hit me, real. hard.  Not all of them were hits, but enough were, and they were all done loudly and with authority.  I managed to get through the inning with minimal damage to the score, but as I was walking in, Bob said, " Boy you ain't fooling nobody."  Truer words were rarely spoken.

I settled down in to what I thought was a good groove, but ended up giving up several more runs, punctuated by Elvin taking me 238 feet deep with base runners on for a "stand-up double."  There was no looking back after that.

Sean came in for the homers, and kept us off balance, and I bowed out in turn to Lattig, who was able to stop the bleeding, and who threw a nastiest curveball of the day at one point.  I think Mike N may have come to close the game, but our team, warriors to the last, were half out of their spikes by then.

* MVP has to go to Elvin, who did it with the bat and the glove, making the plays, especially at 2nd, and having at least 2-3 hits.

* I think our sole run during the early part of the game was on a Elvin dropped ball, this was Elvin's game

* Brandon had a tough game inn left,  but never gave up

* I believe our stand out hitter was Bob, 3-4, all singles, and all very nice

* Tony was back out, still only defensively but damn good to see him in a uniform again

* Abe made the SS baller's 3rd out move: go for the run-down between 2nd and 3rd, rather than the safe force play at first. And who was the runner who was caught in the pickle you might ask?  Elvin

* Sean and Lattig both made some great scoops at 1st.

* Camp Swampy is not a bad field anymore, of course, it's getting plenty of water at the moment,  but the mound is actually in great shape 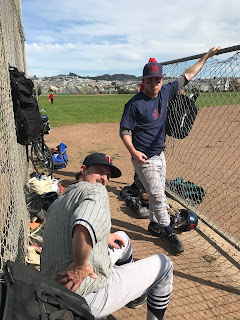 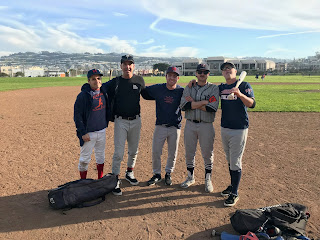 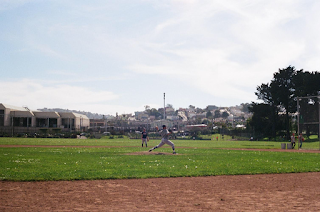 Well I didn't screw it up by expressing my hope that the game would happen. It was an amazing day, 74 degrees at game time, and 21 baseballers came out from their rain-soaked dens to bask in the light.

The real news was the triumphant return of four players:

Tony Rojas, out these last several months with major shoulder injury. Well, he's back. Almost. He isn't batting yet, but he played defense, made a nice clean pick at third for an out, and didn't hurt himself the whole game so we'll take that!

And Duane!  Also a casualty of a long term injury and who I will have to look back to see the last time he and I were at a game together, damn, good to see him too, and he was kind enough to send Satch these ol' pictograms, and also, I think there was a boomerang involved....stories vary on that account.

And JMcG!  Consistent throwing arm troubles have limited him-- though he may have been out more recently than the other two.  But there he was, raring to go, taking ground balls at SS, cracking the ball, moving like an Irish lynx.

And Ben!  For whom it has been a long, long time, his uniform jersey is still in pristine condition, that's how long that has been!

Yeah, Carter was there too, with his two adorable kids, and his wonderful wife, but geez man, you're obviously not crippled like the rest of us, so why not show up a little more often.  And yeah, I know, that has GOT to sting getting admonished from me, Mr. Every Six Weeks Or So.

The game started with Sonny for the homers and Sean for the visitors. Both pitched very well, giving up limited hits, and I think only one run?  Sonny with his sneaky fastball all of a sudden, lots more movement and higher velocity.  Sean, still tricky, still on the corners and you off balance.  I took over after four for Sean, and did my four innings with acceptable casualties....namely the Powell run.

You can't really avoid it, he can belt the ball or he can out-run ground balls especially on a slow infield, he can steal bases and we don't have a catcher in the MBC that can throw him out consistently. Tough out.  I threw my best but my best wasn't quite good enough. Nick W. came in to relieve Sonny and he pitched great too, was breaking off some Uncle Charlie's that had some funk to 'em. Our team just couldn't string any hits together.

That is until the ninth. Mike N. came in to relieve Nick, and we finally got something going, scored a run, maybe? We finally had....base runners.

Only one out. Sean up.

We were all pretty excited with the possibilities.

Sean absolutely pisses on one. Screaming line drive up the middle, where Powell is waiting to snatch it from the shoe tops, flip it to first. Game over.

* I thought we would have more luck in the hitting department.

* Thanks to all the catchers for the day: Mike, Greg, Chris, Nick?

* One team had Chris, Mitch, Richie, Abe, that's a lot of team speed aaaand on the other team me, Greg, Bob... Well you get the idea.

* Speaking of Abe, we all felt pretty bad, he was on our team at the beginning, and was tragically traded away.  And then he struck out his first time batting for his new team.  Well, they got the win anyway.  But we missed his camaraderie.

* Tony made a real nice clean play, and he also had the good sense not to overdo it, on reaching for a couple of no-worry dying quails.

* I think there was an inning where I kept the ball in the infield the entire inning, grounders and pop ups, but there was at least one run scored and multiple base runners.  That was my thing...not good, but it was mine

* One HBP: Carter natch.  You're welcome.

* Richie had the devious play play of the game, bunting for the go ahead, while a stove-in old man was on the mound.

* I squared up on one the whole game, but I was Mitched of my big hit, deep center, into the tall grass. Could have been my longest single yet....

* Thanks to everyone that showed up, it was great to see you all 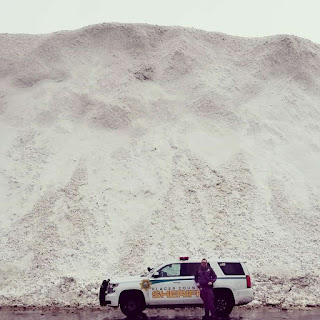 Unless the very nature of writing this post angers the gods, there will be a MBC game this weekend.

After countless rainy Sundays in January and February the sun has finally returned to the Bay Area.

As Californians, it is against the law for us to actually complain about the rain, but let me just say that while I appreciate all that the rain does for us, it would be nice to have a (short) break once in a while.


So there you have it, we are not wanting for moisture this year, as if you had to be told that.

In any case, there will be a game at Balboa this Sunday at 3pm.  Start stretching now, since it has been a while.

And let's also learn from the mistakes of 2017 and clear all the excess brush, grass, and tinder that will be growing exponentially due to the increased rain, so we don't burn down the other half of the North Bay later this year.