Thanks to Mike Gaspar we have a blog entry, sounds like it was a gas, a real zinger, stone gone, and fulla piss and peppa! Also, Congrats to Mitch and Chris for a shut out, and thanks to everyone who played for making it a good time.


It was another awesome fall day at big rec. we started the game 8-8 with an additional player coming around the fourth inning. mitch started for the homers. the week off must have done his arm good because he was in top form. greg took the bump for the visitors. and due to a chris powell double and a couple of passed balls/wild pitches.

The homers took a quick lead. then both teams settled in. the middle innings were a pitchers duel. with the defenses making all the routine plays with some spectacular plays mixed in. in the fifth inning the visitors made some crucial errors and the homers were able to put another three on the board.

Meanwhile mitch held their offence in check save for a booming double by jimmy. but he advanced no ther. and mitch handed the ball to chris shutout intact. the late innings saw the homers score a couple more. chris pitched well for the visitors including one inning where he threw no more than ten pitches. when the third out of top of the ninth was recorded the score was 6-0 homers time of game: 2:25. that's some old school ball for ya.

bob making great, over the shoulder catch at second base

nick with a great running catch in left. sacrificing his body in the process

greg went all nine on the mound.

duane and ed the same behind the plate. not easy at big rec.
Posted by S. Paige at 3:48 PM No comments: 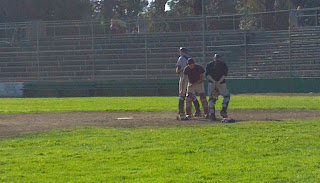 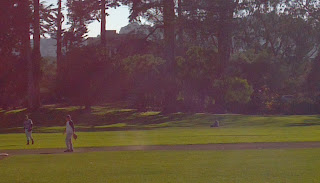 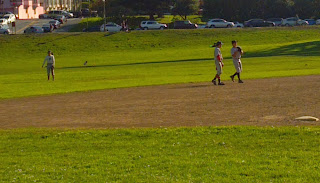 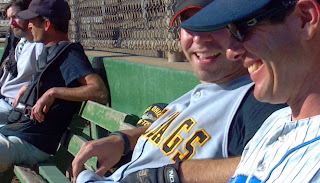 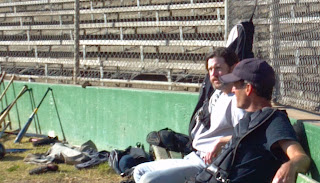 This weeks game was so great that on my drive home I decided that I would tell Mrs. Paige that it could count as my birthday present.  It was a beautiful day, we ended up with 20, and there were four AOY's in attendance.  Will, in true current AOY style, was late., he blamed it on us playing too quick of a game.  Lefty Phelps, Bobby Badass, and Yours Satchfully were more graceful, spending our time throwing strikes, hitting bombs, pulling muscles, repairing wood bats with a steel pole and shaking the one and only Johnny Bartlett's hand.

Yes indeedy, he is back.  Maybe not in game form yet, but come one, give the guy about four breaks.  He drove in the Catalina, threw with Greg, shook hands, ...and the best part of the whole story is that he came out to warm up AND drop off the t-shirts that have now made back their expense, so any extra now goes to  the general fund for fields, Red Man and another bucket of tar.  What a class act!  We missed him a lot, and can't wait to see him again, more and often. Three cheers for our favorite gadabout, Johnny Bartlett!

The game starts, it was me versus Phelps.  This time though, he didn't have the stuff.  Whatever it is that Phelps has had, he didn't have it.  We jumped on him for a couple of big innings, and had a cushion for most of the game.  Felt good to have a few hits along with the rest of the team.  Now Brian can go back to ruling it over us.

Hard to say too much about the game, it was more of a had to be there kind of thing, but the homers made a great comeback in the later innings.  I had bowed out after 6 with the score well in our favor, and no hits yet on the tally for the visitors. Tony Rojas came in to throw a few innings and took a second to settle in ( I had the same problem on a well groomed mound).  Chris Powell to throw his starting to be usual 2 and then Elvin came in, which we all thought was great.  He has been asking politely for a few weeks and we respect that. A gentleman always wins in the MBC.   And he threw strikes.  If he can work on a breaking ball, he's got a bright future.

In the end they took the game back and won it in a regulation 9.  We played an extra one took the extra. Or maybe it was vice versa.  In any case, everyone won.

* Duane did another good job at the dish, with new equipment and some gentle reminders from Mitch on the fine arts of getting hit in the body with a thrown object

* Another game of close, bang bang plays at first

* Doc came out and umpired one last time before he sets off for his tropical paradise in Venezuela to wait out the winter.

* I was throwing some bad ass knuckleballs in warm ups, too bad I can't pitch 80' from the plate.

* JT was once again the victim of a outfield force assist, this time at second base.  He was rightfully upset, we swear we aren't singling him out, it just happens that way.

* I think I counted three hawks in the area

Thanks to everyone for a great game, sorry if I missed some of the exploits, its hard to remember in the midst of all the fun! 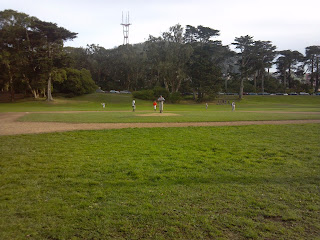 It was a fantastic day for a baseball game, it was sunny without being overly so, no wind, no fog, a little haze, and best of all, no Niners game to wreak havoc.  Yet, for some reason, there was still traffic.  I just don't get it.

We celebrated the glorious return of Sean Paul Presley  who has been out on tour with some musicians, playing this thing called rock and/or roll.  In any case, his hair was short, his mustache was trimmed and his arm was ready.  And the full nine he went, he had probably been dreaming of pitching for quite some time, in fact, I am sure of it.  For not having a blazing fastball, he did great, and he had a weird fork ball thing that he was throwing a lot.  When it worked it was nasty.

Greg started for the visitors, and was his usual shut down self.  I got there in the top of the 2nd, so I missed the derring-do of the first inning, when my team apparently scored a run.  I was razzed as being late and not being Mitch, which was who they hoped would show up.  So I hit myself a infield single, took second on a fielders choice and scored on a hit to center, testing Elvin's arm early.  After that the team left me alone (for a little while....).

We see sawed a bit, the visitors were leading for most of the middle innings and then the homers took an opportunity and tied up the game.  It didn't last long, as we shut down the scoring and went on a scoring spree of our own to fix the score at 6-3.  We were feeling pretty proud of ourselves.

Satch came in the 7th and was throwing pretty good, after figuring out how to pitch around the 9 inch hole in the mound.  And by pitch around I mean, just accept the hole and land in it and try not to sprain your ankle.

We closed in on the bottom of the ninth, 6-4, and with Sean up with two on, he hit a pop up to the infield.  I called for it, as I moved closer and closer to the foul line.  And then, a'la Snodgrass, well, I dropped the darn thing.  The question was had I been in fair territory when I muffed it?  My team was insistent that I hadn't been, the homers were equally insistent that I had.  I threw the ball to Lattig in case there was a chance, but everyone seemed to think that I had been in foul ground.

Hey, we still had a lead, what's one more chance, I thought?

Well, Sean singled home two runs, and tied the game.  We eventually got the second out, but there was still a man on third and Bob strode up and hit a ground ball to the right side.  Nick was there to pick it up, oops, never mind.  And the game was over.

We played an extra inning to have a little fun, although about half of our team left, so the homers were good sports about defense.  Chris Powell came in and pitched for the homers, and we managed to score two runs in our half, so you could say that it was a day that everyone won.

* JT hit the hardest ball in a long time, however, Lattig and I had conspired on making the SQ right field play, and we got him.  Bummer.

* I struck out Will with the heater.  Felt good to have that available

* Two new guys showed up and one of them hit a triple off Greg to tie the game.  Greg claimed he was going easy on him for being a new guy.  Never again.

* Will strapped on the tools of ignorance for the first time, and did a great job of blocking the plate

* Nick tried to get the new guy to slide in shorts.  It may have been a hazing incident.

* Lattig hit a nice single up the middle, but felt his back tweak before he got out of the box.  Hope it wasn't serious.

* Elvin had a frustrating day at the plate, and was throwing his helmet all over the place.  He lacked his usual exuberance, hopefully we aren't getting on his nerves.

* Some guy on the other field was hitting bombs all day

* Dee Dee didn't get hit by anything, and seems to be healing finally!

* I finally hit a ball I could be proud of my last at bat.

* A great day of baseball.