I don't know anything about the game, but I know this.... 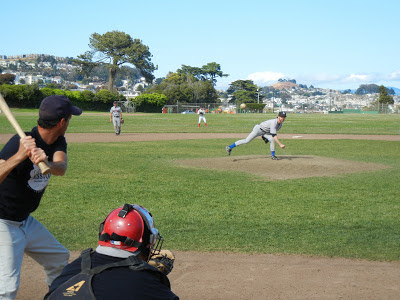 In short, we played a decent game but still lost.  Always a little rough waking up early enough to be in the parking lot by Saturday morning, especially when you get the time wrong.  But we had enough players to be a competitive team, and we got through security with all our gear, so it was a good start.  We got in no problem, and found a deserted yard, literally no one.  We warmed up, took some infield, then some more infield, and then didn't know what to do.  The game probably didn't start for another 40 minutes even after all that.  Te Giants were in no hurry, even after they finally showed up.

Always the way, we either wait at the gate for two hours, or we get in and sit in a empty field.

Greg started for the MBC'rs, facing off with Mario, who was in usual form.  The Giants were down a few players, as the north block had been quarantined for norovirus.  But they still had enough, and they claimed that everyone playing were the starters anyway.

We jumped to a lead in the first helped by an umpire who refused to call strikes.  Mario was so disgusted he walked off the mound and appealed to the coach to do something.  Apparently the ump and Mario have a beef that has nothing to do with baseball.  But he eventually started calling strikes, although he was pretty off the whole game.

The Giants roared back with their own crooked number and never looked back.  Always funny to see how the game changes when they get a healthy lead, everyone starts to have fun again, but as soon as it gets close, the tension rises.

Greg held the Giants to 8 runs, they got half of those on a Grand Slam that the catcher (new guy) backspun out over the right field.  It was obviously his forte, every swing he took was stilted towards the right side.  Hey, it works.

Satch took over in the 4th, and pitched alright, but not great. They hit a few real hard balls that should have gone out, except they hit them to the longest part of the yard.  The knuckleball was working, but I didn't use it enough, opting for the change up which they were able to time better since I threw it so often.

There were a couple of really long breaks courtesy of the delay and yard alerts, so we only ended up playing 7.  We were well in the midst of a comeback when the game was called, so I can't say we really lost the game.  The Final when we stopped was 13-11.

* Loren came through with a big hit when we needed it

* Not too many people got hit this time

* If we can stymie the SQ throw arounds that plague us every game, we could do some damage to our losing record

* Noah smelled like the old carpet at the 500 club, and was leeching alcohol out of his pores the entire game

* Elvin was the inmates new favorite player, especially one huge dude.  We have renamed Elvin, Carton of Smokes

* There are some new big hitters on the Giants

* At least we struck out Mario a few times

* the rest is lost to the time fog, email me if you remember other things

Here is the man in all his glory, out of the hospital, into his MBC civvies and hopefully in ~3 weeks, back home! 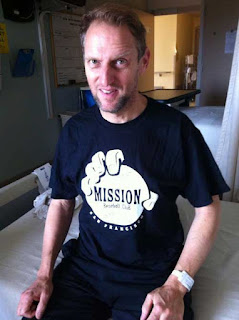