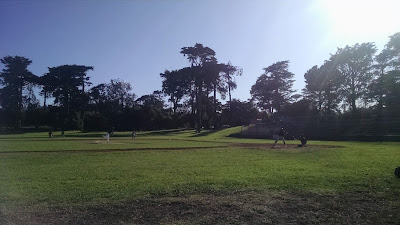 It has been far too long since I last played, and it finally worked out yesterday, which happened to also be one of the most amazing weather days in SF this year.  So that was nice!  We also had 22 players out, which was a refreshing change.  I had lil' Josh Gibson with me, who is all about baseball right now, and he had a great time.  Thanks to everyone who kept an eye on him.

The game was extremely economical, especially at the beginning, and mostly because our team didn't score any runs.  We almost had one on a fielders choice, but a great play instead got the 3rd out.  The homer team didn't break down any fences, but they did score runs, and at the end of the first half of the game it was 3-0.  Then it was 4-0.  Still we couldn't do a damn thing.

Finally, the homers made a few errors to give us a base runner, and we followed with 3 doubles in a row to tie the game at 4-4.

On a crappy note, Nick W. injured himself sliding into the sandbox at 2nd base, his leg caught and turned in the sand, he heard a pop, and had a lot of trouble getting up.  He said it didn't hurt necessarily, but felt bad.  Here's hoping it isn't the ACL, but the story is familiar.  Get well soon!

Into the 9th inning we went, already having decided that we were going to play extras, and in our half we did absolutely nothing to help our own cause, in fact I struck out on a ball that was almost above my head.  I was really keyed up.

In the bottom of the 9th, the homers got Adam on base, and Mike N. threw 2 passed balls to bring Adam to 3rd, and then threw another one that hit the lip of the plate, bounced about 10 feet in the air, and headed to the back stop.  Adam could have walked home.  He scored, but it was then ruled a "shitty way" to end the game.  We got the 3rd out, and Adam was stranded, and we got another chance.

I had to leave with lil' and apparently, the visitors did not score in the 10th, and Urano kept the homers from scoring, pitching a good inning in the 10th, with 2 epic battles with double digit pitching counts to Gaspar and McGrath.  So the game stayed a tie until everyone quit.

Defensively, a little shaky, with a few very notable exceptions.

* The defensive standout might have been....Elvin.  He made an amazing running catch in deep left field, and then 2 more a few innings later.  Also made a tough play at SS (no one knows how he got that gig).  Cap tip.

* The homers turned at least 2 double plays, and almost had 2 more.  I hit into the first one, thank you very much.

* I think it may have the first time a game was restarted because it had not ended in acceptable fashion.

* New guy Matt seems to know what he is doing, and he hit a triple that was over everything.

* Urano and Abe both had some nice plays in the infield

* Greg and Mitch started the game, and both of them threw superbly, Mitch in particular.  We were surprised to see him take himself out, when he was cruising.

* I threw one inning, they scored a run.  But that was it.  I am also really done with that mound at Big Rec.  It's like pitching with your right foot in a sprung bear trap, and then falling headfirst off a cliff.

* I don't usually like to point out things like this, but it became apparent in the game that Tim P. might be one of the slower runners to grace the MBC of late.  And I know that the guy with the fat ass and the bum hip is in no position to be commenting on the speed of others.  But.  Our team was coaching him to take third on a single, and about halfway through the relay play we realized he was going to be out.  By a lot.  More than we thought would have been possible.  And he was.  The irony was that earlier he beat out a ground ball at first, that we successfully challenged.  In any case, if you are coaching third, keep this in mind.

* Gaspar drilled a line drive up the middle, the end of the Gaspar shift?

* Thanks to all the catchers, it was a warm day to be wearing all that gear

* I hit McGrath with a knuckleball that was going about 12mph.

* Nate pitched a good number of innings as well

* Sean summoned his inner Bob voice to yell at one of his buddies in left.

* It should be recorded here for posterity and for future basecoaching scenarios: Tim Presley, a great guy, but not a fast guy.  He got thrown out trying to take 3rd, and also trying to score.  He tried his hardest and he slid both times, and he was out both times.  He did beat out a throw at first though.

* Abe made the "ball rolling up the arm, into the air, grab and throw" play at SS.

* John M also made a nice play on a foul ball

* I hit a double, that I think fooled me as much as it did the center fielder.  It was a line drive that just stayed up and kept going. 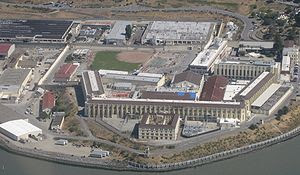 There was another game that was not covered here, but stood in infamy as classic con from the cons.  The quick and dirty was that the MBC was winning, the inmates cajoled the team into playing one last inning, and then "rallied" from behind and in the final wisps of the game stole victory and forced a tie, due to the most flagrant incorrect call from an umpire (a real umpire, not a inmate!).  Nick W blocked the plate with the ball in glove, tagged the runner, and somehow, the runner was still called safe.  Brian Phelps felt that this was tragedy on the grand scale, and put together a Shakespearean description:


To be safe, or not to be, that is the question:
Whether 'tis nobler in the walls to suffer
The ups and downs of outrageous misfortune,
Or to take Arms against a singles or double,
And by opposing end them: to tie, to weep
No more; and by a tie, to say we won
The heart-ache, and the thousand natural shocks
That ump is error to! 'Tis a injustice
Blocked was the dish. To tie, to weep,
Chance to end a Dream; aye, there's the rub,
For that sweet taste, what dreams may have come...


Needless to say, a rematch was in order.

Here with the summations, in order, of the final game are Chris Powell, John McGrath, Dan Chang, Sean Presley with the zinger, and Mitch Burnham.

Some details:
- Plate Ump was all over the place.
- I got a called strike 3 in the 1st on a ball at my feet with Mitch on 3rd, 1 out and a 1 - 2 count.
- Sean pitched all 8 innings, and an amazing game (picked off 2 people).
- Mitch made some amazing catches in center to rob a number of hitters (received a game ball).
- The defense was solid.
- Dan got tattooed in the wrist by a rocket off Austin's bat.
- One rough inning where 4 runs scored (a couple errors but mostly good hits).
- Mitch was 0/0(?) with 3 runs scored. I was 3/4 with 3 RBI
- Nick had a nice play in the outfield, hit the cut and Greg threw the runner out at the plate.

Nick also almost got someone stretching a RF single into a double, but the sun angle was deadly for the recipient of that throw

We didn't get a lot of hits and a had a few too many Ks, but truthfully we did pretty well all in all and the ump was a factor with a mondo/erratic zone or maybe strike acreage

Last, very nice post game huddle and comments and another heartfelt prayer from Brandon to close it out in the twilight
----
Stellar defense in the outfield, Sean was a workhorse on the mound, I got a serious hand job, wrist still sore, but at least I made it out of prison, and yes, I put some ice on it. 3B is no joke, but I'm starting to get a feel for it.

That said, we played a pretty good game considering Chris went 6 for 4 and collected all 6 of our 4 hits and knocked in 8 of our 3 runs.

My own reflection two games in is this is some serious home field advantage like Ive never seen.
----
Glad you got your first san quentin hand job....
----
Sean picked off a pinch runner I believe which is somehow very satisfying even watching it from center. Then we did botch a pickle, but to be fair that guy was a jack rabbit.
Brian had a perfect bunt hit that went about 5 feet and sunk into the silt.
Correction I went 1/1 with three walks somehow, even with that wild zone. Better to be lucky than good.
Posted by S. Paige at 10:22 AM 6 comments: