I really wanted to be out there on Sunday, but I was dismantling a 15' redwood garage door, in order to salvage some nice lumber for a future project.  Luckily, Mike Lattig had nothing keeping him from the game, and filed this report on the new, and improved West Sunset Field.


The new field was as pristine as the weather - and as perfect as the turnout (an exact 18). Sadly for the pitchers, the same can't be said of the defense on Sunday. Through the first four innings, there were probably somewhere on the order of 10-12 errors. A few of them sun related, a number of them glove-related. And one of them (I'm looking at you Don) feet-related.

Greg was the first to take the immaculate new hill in the middle of the diamond, and was able to wiggle out of a two on, two out jam to leave it scoreless. Nick toed the rubber for the visitors, and struggled with his command early before his defense began to struggle with their command of catching the ball late. Fortunately for us, that ineptitude in the field was matched by the homers as the game quickly turned very Mission-y... Maybe we just aren't used to a field where the ball rolls that nicely and takes true hops?

That theme repeated for both sides over the next few innings. And by the time Greg and Nick made way for fresh meat sometime around the 5th the score was about 10-6 visitors. We eked out a couple more runs against Sean over the ensuing innings, as Mitch kept a tight leash on the homers - and we headed to the 9th up 12-6.

But, as is often the case, no lead is completely safe. A string of hits (some solid, some bloops) in the 9th, along with a dropped fly ball in left, had the tying run on first with two outs. Alas, we locked it down finally and left with a 12-10 victory.

* The Jameson Twins made their long overdue returns. Looking like they've been enjoying their downtime to the fullest. They've threatened to become more regular again. We shall see.

* The sun was the star of the game (see what I did there) for both offenses. Any ball hit into the air in center or left was an adventure. So hat tip to those brave souls (Don, Mitch, Noah, James, Nick) who manned those positions and gave it their best.

* Mitch made two great catches. One a line drive back to the box while pitching, the other an over the shoulder catch in center after breaking in, losing the ball in the sun, and then having Noah direct him to the right spot.

* I remember solid line drives from Tony, Mike, Randy, Sean... I'm sure there were more. So it wasn't all bloopers and sun balls. But there were a lot of them.

* There was a broken windshield in the parking lot, and Parks and Rec came out. Unclear if we'll be on the hook for anything, but stay tuned in case a hat needs to be passed...

Overall, the new field is stellar. Every ball I threw around the infield from first base took nice true hops, rolled smoothly, etc... It was a treat to play on a great infield for a change. Just have to consider whether playing there in the winter - when the sun is low in the southern sky - is the best idea. 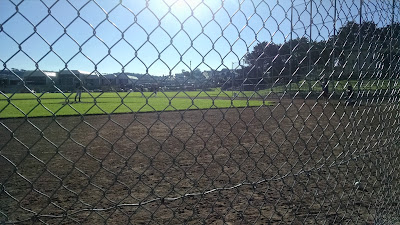 Winding down the last of 2017, amazing to have a game as well-attended as we did. Middle of summer we couldn't buy a full squad but come winter time, and we had 21 players. Goes to show you never can tell....

I was the second player out to the yard, after James who was doing a pregame shirtless workout. At 12:45 we already had enough to start which threw the team into a quandary since we are usually trying to figure how many guys from the Mexican league we can entice to stick around. So we warmed up and got to it as soon as possible. I started for the homers and Lord it felt good to throw. Especially without pain. I was noodling around with a different grip on the knuckle ball and when it worked it was great. But I couldn't seem to throw it when there was a batter in the box, without it tailing inside. Luckily the change up was picking up the slack and since I was well rested,  I had a fastball.

Brian Phelps started for the visitors and was my equal in liveliness, but he was having a real murderers row in our team. I don't know how it happened but we should never have been allowed to have the hitters we did: James, Powell, Lattig, Tony, Sean. That right there is a RBI fest.

We jumped for 2 runs in the first inning, then 2 more, then (2) 4 more. By the middle innings the score was 6-0, or 8-0, there was a discussion and it seemed more sporting to assign the lower number. The visitors had opportunities but we managed to keep them stuck at third without scoring. But it couldn't last forever. The left side of the infield was having a lot of trouble holding onto the ball for some reason and with two outs, a ground ball got bobbled and then thrown away and just like that the score was 6-2.

I was still feeling good but after 7 innings I figured I should take a turn sitting out and I was happy with my outing, punctuated with a fastball third strike to Phelps to stop a potential rally. Sean came in and Tony after him and they both pitched quality innings.

The visitors had Phelps in the beginning and then a new guy Urano, and then another new guy Jimmy. About eight pitches into his inning, we hear a strange noise and see a pitch that goes ten feet high and inside and Jimmy is on the ground. Worst case scenario. He isn't screaming in pain but he's not moving either. John McGrath gets him a sling to support his arm, which he can't move. He's able to stand and walk and talk which is great. Richie drives him to the hospital and later updates us that he broke his humerus throwing that slider. Ouch!

The game had taken on a somber tone after that, obviously, but we played out the 9 innings.  Ed pitched in the 9th, and I finally got good wood on the ball, for the first time in the game.  Tony closed it out, and the final was a rather lopsided 12-2 game.

* As Ed said, Jimmy has now joined the MBC Broken Arm club.  Although Jimmy's was done in a more proper fashion than Ed, who stuck his arm into a oncoming convict barreling down the line at San Quentin.

* Cap tip to Jimmy for a very composed response to a broken arm.

* Tony and Powell were not fans of the new baseballs, must have been too slippery, they combined for about 5 dropped balls.

* But they also had some great outs, so I will compliment those as well

* Randy got hit right in the arm with a pitch, it sounded painful.

* Thanks to McGrath for leaving Liam to start the game, even though he coulnd't be there at the beginning.

* The first game in a while where there was an AOY battery pitching to an AOY.  Twice! (Combinations of Phelps, Ed, Bob vs. Lattig, me).

* Urano, at SS, on the mound, and with the bat, a new guy with some flair

* Loren was out again, and something is wrong, he isn't killing the ball like he used to.

* Someone had a really good opposite field extra base hit to right field in the later part of the game, but I don't know who it was....

* I threw a hell of a knuckleball to JT and to his credit, he ripped it

* Matt Stone got his quarterly reprieve to come out and play, and he is using wood rather than $300 metal bats now!

* With men on second and third, and one out, Sean made a nice catch on a slicing foul ball that was right near the end of the fence on the first base side, after which he crossed the threshold into out-of-bounds territory.  JT, our resident mentat, tried to wrangle a run to break the shutout by introducing MLB Rule 7.04c, which states:


Each runner, other than the batter, may without liability to be put out, advance one base when—


(c)     A fielder, after catching a fly ball, falls into a bench or stand, or falls across ropes into a crowd when spectators are on the field;

My response at the time, along with the rest of the team, was: Sure, just as soon as we start calling every balk that has been committed, as well as every other infraction.  Some other wag made comment that it's probably also against the rules to imbibe in intoxicating agents while playing, but that has also somehow historically failed to have been enforced. However, since I was not clear on the rule, I wanted to look it up.  I believe my lawyer teammates would probably point out that the rule clearly states that the runners may advance only if the fielder "falls".  It is repeated five times in the rule, and never does it state that it's in effect if the player "enters" out of play areas. Sean was standing proud the whole time.
Posted by S. Paige at 10:38 AM 1 comment: