Another nice day, if the wind wasn't blowing.  Seriously, gusts all day, some of which blew pop flies all over the place.

It was Don's birthday, and he had a fan base out there.  There was the promise of pizza, beer, and cupcakes, but nothing had materialized by the time me and lil Satch (LS) had to go.  Hopefully it happened.  We started a little late because the traffic and parking was terrible, thanks to Duane for sending out a warning email, though he didn't make it himself, so not sure what that meant.

Sonny started for the homers, and I think he threw a complete game, way to go!  The visitors had some pop but just couldn't string together much of a offense.  Carter was on the bump for the visitors, and threw well, having his little one and wife in the stands as well.

The game went along fairly quickly,  we were 10-10 by the time everyone got settled, and had some nice plays at first, for the homers.  We threw the ball around a lot as the visitors.

I came in for the 6th and 7th and felt good, I was worried with LS getting bored and tired that I was gonna need to be efficient.  And Lo and behold, I tied the major league record for minimum pitches in an inning with 3.   Carter, who was catching by that time was in full support of the last batter getting a picture perfect fastball down the middle, cuz that is what you gotta do!  Luckily, the pop up that ensued was not one of the ones that was dropped ( I dropped one the inning before).

The hardest hit balls of the day seemed to get caught, which is just the way it goes.  Me and LS had to depart after the 7th, with the score at 5-2.  I have not heard the final outcome, but I imagine that it was around that.

* Nick Smith was called out once at first on a bang bang play, and then when it happened again later, he was called safe, due to the unfair nature of the play (and cuz he was safe....)

* JT came out, and hit a scorching line drive that was caught.  He also made a crucial out in right

* John McGrath caught, did well, hit the ball, almost had a close play at the plate

* Lattig did the best with a lackluster bunch of throws from the infield, and made some great picks

* Terrible hops turned into great hops  a lot that day

* Elvin had a great RBI knock

* Randy also had some good defense

* Bob did some catching, had a nice wallop

* Mitch, who we are worried has work-related scheduling issues on Sundays now, was out, and not playing outfield, but still making Mitch catches

* I hit the highest pop fly that dropped clean for a single, due to the wind, and the left fielder playing me at 415ft.

* LS is coming around in his hitting, got some plate time, and wants me to remember to bring more food and a larger sunshade next time. 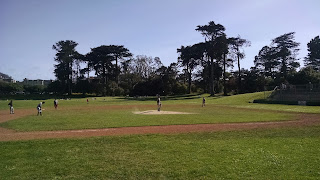 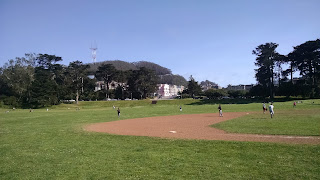 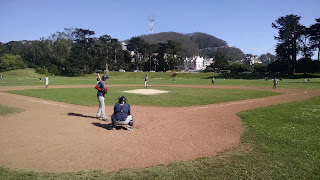 A spring day in May is a fine thing, and even better when there is aplenty of parking.  In our yearly recruitment drive, we played in GGP on Bay to Breakers day, and netted some fresh volunteers.  I think the heat must have knocked the drunks out early, I didn't see the usual assortment of staggering giraffes and body paint that I have in years past.

We started with 13, with Satch and Greg going head to head.  And that is how we finished, a complete game for both hurlers, which is how it should be.  The field and the mound were both in great shape, which made pitching a lot easier. A late McGrath made us 7 on 7, a legitimate game. And much later, after recruiting, Dennis showed up and we had 17.

We gained a Dutch recruit who played right field for a half an inning and took a hurried at-bat, in which he grounded to second but didn't bother to run, and then suddenly left, due to his girlfriend waiting for him.  The decision to invalidate his ground ball as an out was contested, unofficially, as we felt he had made an impact in the defensive game, gathering in a ball hit by Nick that would have been extra bases had the Dutchman not been there.  But whatever....

The visitors scored first, then we answered back to knot it at 1-1.  It was to be a see-saw battle the whole game, which made it exciting.  I will say that the lethargy shown by the Dutchman was infectious in his team, the visitors in particular had not interest in running out ground balls.  That lack of hustle may have made the difference in the game.

I noticed a man and woman in sporty togs that watched at least an whole inning of the game so I sauntered up and asked them if they were interested in playing? They both agreed and we had 8 on 8, which made the situation a lot more relaxed.  Brian and Michelle had actually run the B2B that morning, and showed a lot of spirit in playing eh whole game with us.  Michelle was on base twice and scored a run, and didn't strike out.  Brian, not so much, although he did also score a run and made a perfect throw to the plate from left to gun down Jon McGrath.  We were lucky to have them.

Going into the late innings, Powell was interested in throwing and I declared the 7th my last inning, and then had a good inning and asked for one more inning.  Chris, out of the goodness of his heart, acquiesced and suggested that I could also pitch the 9th if I wanted to.  I couldn't argue with his logic that he would have the opportunity to throw next week, while it might be a month before I was back out.  A sad, but true commentary.

We were tied at 7-7 going into the bottom of the 8th, and then James got on, and scored the go ahead run coming all the way around.  In the top of the ninth, the visitors roared mightily, until they got into the batters box, and then, they went down in order.  Tony hit what could have been extra bases but Dennis was there and made the catch for the game.

* It was almost too nice of a day

* Thanks to Bob, Adam and John for doing the catching on a day when the weather was hot

* We had a series of foul balls to left, some of which I am not sure were actually foul

* There was quite a few untouched pop ups that go as singles in the books, but were not pretty to watch ( I had one)

* Elvin continues to improve as a lefty, and had a great timely hit

* I don't think I hit anyone, and the only pitches that were getting away from me were knuckleballs that anyone could avoid

* Chris made some crucial plays at SS, and stopped a few more from getting to the outfield

* Once again, perfect strikes to anyone other than Richie in the box

* Tony gained the love and attention of three kids in the stands, giving him advice throughout his at bat and subsequent base-running.  Given the adulation that he was garnering, I found myself feeling like the villain in a wrestling match.

* Adam made a number of great stops at catcher, which at Big Rec can be a substantial difference in the game

* Matt also made some great plays at SS, and was a constant threat at the plate

* Greg did a great job on the bump, the game could have very easily gone the other way

* Tony knew the knuckle was coming and was still flummoxed.

* Thank you to everyone who came out to play, it would have sucked for my once a month game to be a batting practice on a beautiful day

It came to our attention that John Nero recently moved to Chicago, without so much as a warning, much less a goodbye.  After ~16 years playing with the MBC, we thought we at least warranted a social nicety or even a polite "go fuck ourselves."

Apparently not.  Hopefully we have not seen the last of him, and we wish him the best.  Someone else is going to have to bring the vegetarian-only grill for the 4th of July BBQ.

For those who wish to remind themselves, here is the player profile on John from 2009.

I wish I could have been there, sounds like it was a well-played affair.  thanks to Abe Zuckerman for the write up.  Too bad we couldn't keep the winning streak alive into the 2016 season....


Game was preceded by the teams lining up on the first and third base paths, a four man color guard marching onto the field, an inmate signing the national anthem (quite well) and the warden throwing out the first pitch (high and outside).
Sean pitched all 9, held the SQ All Stars to 2 runs in the (2nd?), which we matched in the (5th?) to even the score.  The game remained tied until the bottom of the 8th when the SQ All Stars plated 3 runs after a couple errors, a couple hits and couple a stolen bases.
We didn't score in the top of the 9th and it was all over, 5-3 them.
Notable plays:
* Sean picked a man off third by throwing over to Tim who proceeded to chase the runner almost all the way home before applying the tag.
* Sean picked another runner off first via the rundown, getting assistance from Powell (at short) and Dwayne at first.
* Matt, playing second, tried to gun down a runner that was sneaking home from third.  Matt threw a strike to home where Greg successfully blocked the plate and applied the tag and the runner was called .... safe, for some reason.
* Matt went 2 for something in his debut, crushing the ball both times.
* Mitch, who requested to hit at the bottom of the order because he was "rusty" hit a strong single in his first at bat, only to be picked off immediately even though he was standing like 2 feet from the bag.
* The SQ All Star left fielder made a running, jumping catch on a ball that was crushed by ????
* I made a diving catch coming in on a pop-fly hit to shallow right field that Jimmy, playing second, never saw.
* Elan smoked some balls and pulled his groin.  He then continued to hit even though he couldn't run at all.

* Of Special Note:  The SQ All Stars gave Greg a major league official game ball signed by the entire SQ team in appreciation for his services over the years.  Seems that the players in SQ feel the same way about Greg as we do.

I don't know what happened at the the games other than two pictures from the catcher's POV and a two sentence description with accompanying pitchers list that I got from AOY Sidawi.


Home won 13 to 12. Coney island James hit one to the moon for a triple and mars for a hr. 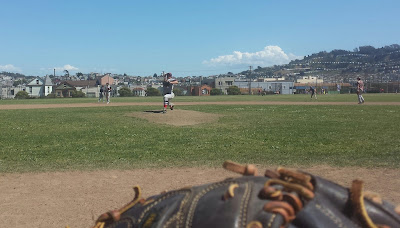 Through the "miracle" of technology, the final run of the game was captured by Abe, in slo-mo and with corresponding ethereal acid guitar.  Abe's hazy memory on the game is as follows:

My recollection is that the homers were down 12-7 going into the bottom of the 9th facing Tony on the mound, and the homers crushed a series of hits, scoring 5 runs on 1 out, followed by my brother Max hitting the sac fly that scored Randy (I think I have his name right), sliding underneath John's tag at home.  It was a close play that was seriously contested for a second until people were shown the iPhone replay.