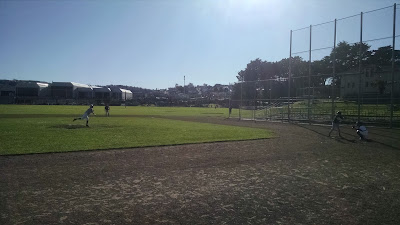 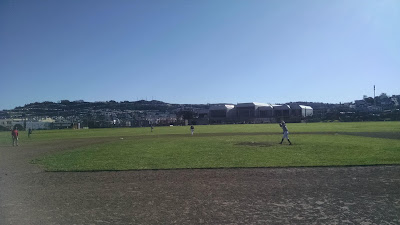 Well, we were shorthanded and nearly got blown off the diamond for most of the game, but still a good time.  The wind was no joke, I thought last week was windy but this was crazy.  The entire game, any ball that got up into the air was not assured to be caught by any means.

A deep fly ball that started out to the right of Tony in left was caught by Sean in mid left-center field.  Adam threw a ball back to me from 1st that moved about 4 feet.  Greg had a bead on a pop foul that just kept moving farther and farther away from him.  Sean made a throw from left that should have easily made it to home, and the wind pushed it right into the ground, before it hit the infield.  The change-up and knuckle ball were great pitches to throw in the wind, the fastball not so much.  I had to step off the mound a few times to wait for a gust to pass, and keep from being blown sideways in mid-pitch.

We had 15 at our highest, which was doable, but far from ideal.  I started for the homers, and Sonny for the visitors.  The game was close for a while, I held the visitors to a run an inning for the first half, and we scraped together enough to bring the game to a 2-2 tie, thanks to Mitch.

All was well, and then we had a real barn burner of a whoopsy inning and next thing I knew, it was 8-2 and it seemed as though I had been pitching for a very long time.  Seriously, we had no outs and bases loaded for most of the inning, and yet, I think there were 2 balls that were hit out of the infield.  The pop ups alone killed us, and we provided the rest with bad luck, trying to get outs at the wrong bases or trying for two, and in-between dinks.

Here is a visual representation of where most of the hits landed or were picked up in the inning.  We had at least 3 ground balls that didn't result in an out, as well as pop ups in the infield that were not caught.  An infield fly rule helped us greatly, when that pop up was also dropped.  James, poor guy, really teed off on one but Sean was able to track it down, and then he did it again a few innings later. 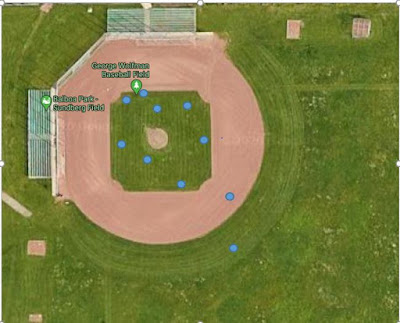 So, 8-2 going into the 5th inning.  Then after the 6th, the visitors lost a player and then another, so we had to get creative.  My day was effectively done anyway, so I volunteered to be all-time defense, and Adam was traded to the visitors.

Those two moves seemed to help my team offensively, and they ended up scoring a bunch of runs, in the next two innings, and going into the 8th inning it was tied up at 8-8!  The powers that be decided that was a good time to end the game, since we had 2 more people that had to leave.

* Mitch played 1st base for us in the beginning, and made two great outfield-style catches and an awesome dig out.

* After a game of force out potential with nothing to show for it, I finally got to a ball hit about 10 feet up the third baseline and threw it home to force Bob.

* Greg, McGrath, Chris, Bob did a great job on a tough day to be catching

* James got robbed, by a combination of strong wind and Sean

* Sean also gets the game ball for his deceptiveness, racing in from center field to pick off Mike N. who was caught unaware.  It was awesome.  And from the pitchers point of view, takes the guesswork out of the 2nd base pick off.

* So many dinks and pops.

* After getting the force at home, Bob asked if I even knew that the bases were loaded when I started that play.  I did, I also knew that they had been loaded for quite some time.

* A foul ball came very close to hitting a guy pissing in the bushes off the third baseline, who did not hear our shouts of warning.  That would have been both amazing and tragic.

* Greg had the unfortunate mantle of hitting into 2 double plays.

* Sonny hit the ball well, and in key moments in the game.

* McG hit the ball real square, but it had a slowed first hop that doomed it.

* Gaspar had a very Gasparian hit to left field, threading the infield defense

* Sean's triple to right was the hit we had been waiting for all game, and lucky he had me running after it

* Thanks to all that braved the wind to come out and play.