The May 1st game was kind of a poor excuse for a game.  The energy wasn't there.  We had fun as usual, but not much to report.  I think the final score was 8-2?

The May 22 game on the other hand, was an amazing day, bright blue sky, warm, no wind.  Hard to believe that in about a month it will be socked in with fog and cold.  We were low on players due to various things, but we ended up with 15, and we played 2 outfielders so that we were able to sit and relax.  I am starting to think that we are close to a official variation on baseball that is perfectly acceptable with 14 players.

Sean started for the home team and we thought we were in big trouble but he proved to be human-ish.  We tagged him for a few runs early, and took a 4-0 lead into the 3rd.  Nick was throwing good ball, especially in his warm ups, but the other team woke up suddenly and we went from 4-0, to 5-4.  He bowed out, and I bowed in and then the world blew up.  In between some very nice hits by the homers, we had two innings worth of 6-out ball.  It was tragically funny, and we all had a chance to be the goat.  We did manage some good plays, but the amount of drops and misfires was astounding.

The boot on the throat was when Tony filled in left field for our team, and caught and then dropped a fly ball, after being blinded in the sun.  He was arguing that it should have been an out, but ultimately, no one took him up on it.  That extended the lead to 13-10, and that is where it ended up.  We only played 8 since the start was delayed while we waiting for people to show.

* Nick, John McG, and Chris did an awesome job catching, there were a lot of scuds thrown, but they blocked them all.

* After a good long stretch, HR fell back into old ways, and had an at bat against Dan that I think went 3-rounds.

* Anna had a great line drive

* Sean came close to snapping after me and the rest of the team refused to honor the unwritten rules on hitting to the outfield where there is no player.

* If we had a center fielder, it would have been a different game.

* I think I may have been 5-5, but in the process I think I have damaged the Tree Trunk.

* Double play by the homers

* Triple error for the visitors

* Adam has returned from the road, great to have him back! 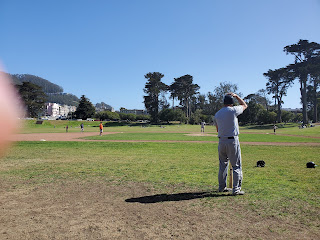 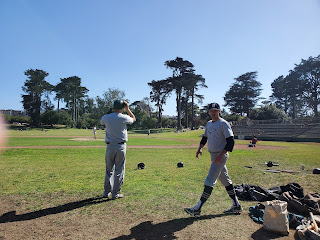