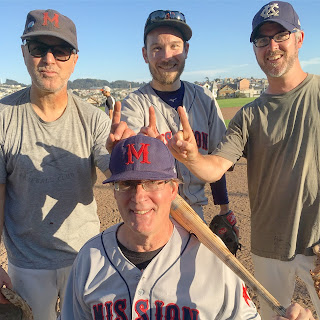 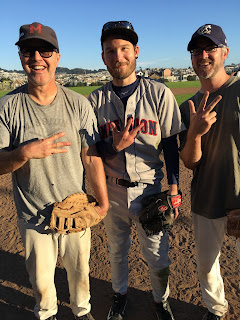 It took me a extra day to get to this one, as the sting had not quite gone out by the usual press deadline.  Needless to say, I had a great time, and I think everyone else did too.  Remember that I said that.

It was birthday weekend, the only Sunday other than Father's Day that it is understood that Satch gets a free pass to play ball.  Luckily, many others were like-minded and we had 24 to begin with.  By the end of the game, that number had dropped to 20, but what can you do?

We started a tad late as the Mexican league was playing in front of us, and we wanted to be hospitable, as they always are with us.  It also helped that it gave me an extra 10 minutes to warm up.  Lattig started for the homers, and I think he got through the first inning unscathed.  I felt good taking the mound.  I wish that I looked as good as I felt.  I was getting K's, but in between those, the homers were hitting the ball hard.  By the end of the 2nd inning, the score was 4-0, I think.  We scrapped for a run, but in the process we lost Rojas to a knee injury that I fear will be a while before it heals.

My pitching was great one inning, and awful the next, and when I managed to get a pop up, it was in between everyone, or worse, to someone, but it didn't get caught.  Ben saved me a few times in left, snaring line drives.  By the 5th inning, it felt like the 10th.  The score had crept up to 9-3.  I still felt good, but we had been sitting a lot of players, and I wasn't getting the game I wanted to see, so I stepped aside for Sonny, who came in and shut down the homers for the rest of the game.

Defense for the homers was superb, so much so, that we spotted Mitch in right field, which gives you an idea of the confidence that they had.  Abe was all over the place, making catches, and Tim was doing a great job blocking the dish.

Lattig gave way to young Nick and then to Powell, which helped us a little, since we knew he couldn't play SS and pitch.  Suddenly we started to come alive, and that's when I, along with a few of my teammates, really shit the bed.

Around the 7th, we scored a run, and had no outs, with the bases loaded.  I was on first, Sonny on second, James on third. Finally, the waves were gonna break our way.  JT comes up, and lines a hit to short left center field.  I was so excited for JT, and for the prospect of some dignity for our team in the game, I started thinking what it would take to get to third, or even home if it got past the fielders.  Then like a lead ball in the gut, Abe comes diving in, and catches the ball while sliding along the grass.  He was only about 20 feet from second base, he fired the ball to second, doubling off Sonny who was thinking the same thing I was, and then to first, to catch me tripled off.  Yes folks, a triple play.  I couldn't quite comprehend what happened.  Greg's look of disgust was all I saw walking back to the dugout.

We went down meekly the rest of the game, I don't think we scored another run.  Shit.

* Got to give it up for the defense, it wins games.

* Ben's defense was our shining moment

* I never scored, but I did have a 1.000 on base percentage, with 3 hits and 1.000 percentage in fielding opportunities and about 5 K's.  Happy Birthday, asshole.

* Defense of the infield for the homers, especially Powell and Adam

* At one point Greg almost got thrown out on a hit to the outfield, to which I replied, " At this point, we are trying to fuck up singles....."

* Every person on the home team seemed to contribute offensively and defensively.

* I will give a shout out to Bob on a play at third that he got me to convert on a swinging bunt to get a lead runner.  That was good.

* Duane made a spectacular running play on a pop up in foul territory at first.  Technically he was out of bounds, but you got to respect the play when it happens.  And it wasn't going to make much of a difference at that point.

* The election results were discussed, both sides were respected as much as they ever are

* Mitch was on base about 10 times, it felt like

* Mike did a good job behind the dish after Greg

I hit a ball on Sunday that went over everything in left center, probably about 410 feet (yeah, I google mapped it....).  Given my portly carriage and general torpor, I settled for a triple, rather than get thrown out and embarrassed.  However,  I have always felt if a ball goes that far, and everyone sees it go that far, there should be an understanding that it should be a home run and the runner shouldn't be challenged but given the by your leave to circle the bases.

I have often wondered if I should just do it, but I don't want to look like a (bigger) asshole than I am, by trotting around the bases and getting tagged out.  However, in the discussion that commenced after the game, most people said that they would have respected that home run call.  The rub is that I have to plant the flag and do it, knowing full well that I risk that my intuition on the hit was wrong and disappoint my team (again).

It's all theory until put into action, and only then can you hope to enact the change you wish to see.

Wise words, whether you are an out of shape, over the hill ballplayer looking for a second chance, or anyone else that wants the world to be a better place.
Posted by S. Paige at 1:52 PM No comments:

Here with the recap is Abe Zuckerman, third baseman, spray hitter and expert bunter, and your friendly neighborhood tax lawyer.  When you got money, and Uncle Sam wants it, talk to Abe. 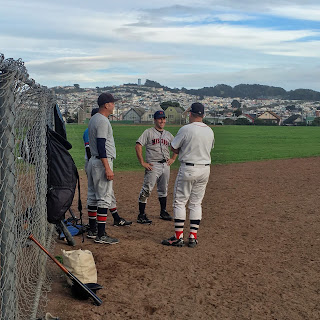 The stories of the game were Carter on the mound, and the visitors' bats running wild.  Carter started for the visitors and threw a no hitter thru 7 (with only two errors) before giving up back to back base hits to Sean and Abe and then getting out of the inning without giving up any runs.  I believe the final line was Carter pitching 7+ (8?) scoreless innings and facing 2 over the minimum.  Powell then came in and closed it out.  I don't believe the homers scored.

Greg started for the homers and from the first inning gave up hit after solid hit. Both Sean and Tony pitched in relief but the visitors were hitting solid liners and long fly balls off them too.  A couple errors in the field didn't help matters.  With Carter blanking the home team things were quickly lopsided (8-0 or thereabouts) by the third or fourth inning and it stayed that way.

Aside from the crushing offense and pitching of the visitors, a number of good defensive plays were made on both sides, including:
- John snagged a line drive hit above his head while over at first base.
- Chris dove to his left at short and caught a very hard hit line drive.
- Sean pulled a Willie Mays while playing first, on a ball popped up down the first base line.
- Abe made a sliding catch ranging to his left in center.

Final Score: 10-0 or thereabouts, which doesn't seem that bad, but it was an absolute thrashing by Mission Baseball standards.
Posted by S. Paige at 11:35 AM No comments: