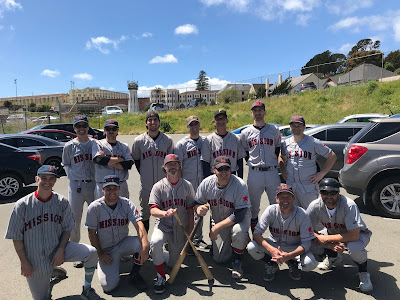 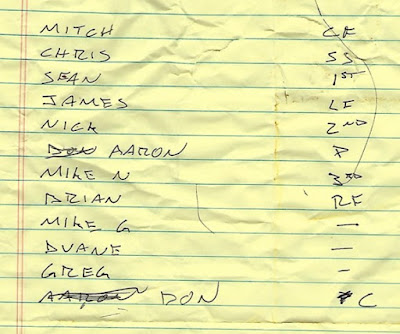 A beautiful day for a ball game.  And I got there before Greg did, which staved off the usual jokes concerning how I live my life.  The day was cool-ish but it warmed up considerably, and we had an amazing sunny afternoon.  We fielded 14 players, when the unexpected Phil Snyder joined our ranks, the last documented game I have Phil in with the MBC was 3/11/12 Big Rec!  .

The new coaches showed up, and we dragged ourselves up to the gate once more, and a new process, we didn't had our IDs to the guard, just showed them, then went to the second gate, got a clip-on badge giving us visitor status, signed in, searched, and through the final gate. The garden and sanctuary looked as nice as ever, and we didn't hear any screaming from the Adjustment Center, so that was a benefit.

The field was in tip top shape, chalk lines in place, and we were told that the inmates had started work on it early Sat morning.  It was immaculate.  The players were in the process of donning their uniforms, which I was particularly grateful for, the wait can sometimes be a bear.

Being Opening Day, there was a bit of pomp and circumstance to do, the color guard came in from right field, and an inmate sang an a capella version of the national anthem, which was great.  The 90 year old grandmother of Mike, the baseball director threw out the ceremonial first pitch, and then was followed by the SQ inmate advocate, who also threw out a first pitch, and was given a jersey and hat.

We faced Big Rob on the mound, 2018 Cy Young (SQ) winner, who looked like he had gained about 10 mph on his fastball, and was throwing a sneaky breaking ball as well.  We drew first blood, which never happens, and James (who had a real "It was the best of times, it was the worst of times" day) batted home the first two runs with a fielders choice.  We felt pretty good.  For a second.

Satch started for the MBC team, in the new and controversial "opener" pitching position. I didn't feel like I did that badly, but they scored 5 runs in two innings, so it was not great.  We had been warned of their 2nd hitter, for good reason, though he went 0-4 for the day.  He hit a foul ball into his own dugout fence that I think may have killed someone if there was no fence.  I got a 3-0 count on him and decided to walk him my second time seeing him, which mostly worked out.

Sean took over in the 3rd, and had a great first inning, but our team was having a lot of trouble finding the handle on the ball, and our one really bad inning was more like bad latter part of the game.  We did get out of some jams, and Chris Powell in particular had a couple of amazing plays at SS but I think our error rate was about 50%.

Base running also proved to be a ongoing challenge for us, and yes, let's get it over with, James was picked off....twice....once using the hidden ball trick.  None of us were paying attention, including the umpire, so we couldn't say that the pitcher was on or near the mound at the time, which is how SQ likes to run that play (and which is illegal.)  They added a wrinkle this time, and the 2nd baseman had the ball stashed in his pocket.  More on that later.

Sad as it is to report, we had multiple chances to get out of innings unscathed and just could not seal the deal.  The nail in the coffin was a two out, bases-loaded dropped fly ball in left center that James and Mitch convened on, and as James put the glove on the ball, it popped right out again.  The A's only scored one run on that play, since the ball was easily retrieved, but the next batter lasered a pitch to center, up and over the fence for a grand slam to make the score 10-3.  Our will was pretty broken at that point.

A new pitcher came in to relieve Rob, and he was a little more wild, but effective, and we only managed to score one more run.  Sean was pitching his heart out, but not getting much support from us, and he hung them up and Mike N came in to mop up in the 8th.  He fared little better than the rest of us had, and might also have been hampered by wearing an MBC jersey a size and half too small, so it is possible that his general circulation was negatively affected.

After the game, Greg was given another signed ball by the inmates, to thank him for his continued support and management of the game.  We had a time for an inmate to share what it means and for the MBC to come into play, and why the A's like playing us (in sum: we're good guys, and we also lose well...a lot).  Greg gave a similar talk on our behalf, acknowledging what a nice group of players the SQ teams always are and voiced that we hoped that through our games that some small amount of joy and respite is taken from the few hours that we are there.  A team prayer followed, and then a group hug.  We filed out, and back to the parking lot.  The day was too perfect to waste, so we headed to the Marin Brewing Company for lunch and discussion of the game.

* Chris Powell had two plays at least, that were top notch, one a sliding on the far side of second base to stop a ball.

* Chris also had the drive of the game, a double to deep center.

* The umpire wasn't too bad, he seemed to be consistent, but he had the strangest call on a play we made at the plate.  James had a ball get by him, he relayed it to Powell, who got it to Don to get the runner sliding into home.  But the umpire made a double-fisted gesture that none of us recognized.  The scorekeepers in the outfield thought he was safe, it took a while to figure out.

* Brendan Terrell, MVP of the SQ A's last year showed why he earned that award, he robbed us of about 5 sure hits, ranging all over the infield, including my only actual fair hit ball of the day, a hard hit grounder up the middle that had easy single written all over it.

* Juan, last year's Rookie of the Year was the man with the slam.  He came up again later with the bases loaded, but failed to approach a 10+ RBI game.

* Sean deserved a better game than we gave him.

* Don and Greg both did an amazing job behind the dish, blocking a lot of balls in the dirt.

* I got a big swing through on a change up, that was satisfying

* I also hit two batters, though the first one, the batter put him arm in front of a curve ball that was a strike until his arm got in the way.  Sean argued no intent to avoid, but was unsuccessful.  We got to bring in a rule book.  Or JT.

* Juan also made some great plays at 3rd, including a tag the bag throw home double play.

* Phelps almost killed someone with a foul ball

* Another home run was hit by the A's, the batter thanked Sean after the game, ouch....

* Mike N. didn't steal on a very passed ball, then tried to make up for it with a ball in the dirt and was thrown out easily at 3rd.  That was a metaphor for our whole game.

* Duane ran into a runner going up the first baseline, but he managed to not break his arm, Ed.....

* James was pinch running for me both times he was picked off...

* I walked twice, the second time on a full count.  The ball was well outside, but I heard STRIIIIIIIIIKE!  I walked back to the dugout dejected then looked at the umpire and he motioned to first base, and at that point realized that I had been juked by a heckler.

* The hidden ball trick.  Is it legal to put the ball in a pocket?  We all figured probably not.  The Internet is kind of helpful.  Jose Altuve tried it once, but he didn't wait long enough.  Someone wrote a blog post in which they parsed the rule:

For those of you who are too lazy to follow the link, here is the writer's conclusion:

The play is not specifically covered by any one particular rule, but we can piece together several points of information to adjudicate this play. Common sense likely dictates calling "Time" and placing the runner back at second base. Forgoing common sense, however, leads us to the issue of whether a fielder can place a live ball in his uniform pocket and subsequently retrieve the ball to tag out a runner. MLB Umpire Manual interpretation "Ball Going Into Player's Uniform" states, "If a batted or thrown ball inadvertently goes inside a player or coach's uniform...the umpire shall call 'Time.' He will, using common sense and fair play, place all runners in such a manner that, in the umpire's judgment, will nullify the action of the ball going out of play. In no case may any outs be recorded on such play."

Although this is decidedly not a case of an "inadvertently" created situation, the ball nonetheless is dead (defined as "a ball out of play") at the moment it goes inside the player's uniform pocket. Accordingly, we take stock of the situation at the moment the ball becomes dead: The runner is standing on second base not intending to advance; accordingly, the proper call is to place the runner on second base and resume play with one out and one on.

Note that this play does not involve a detached uniform piece or equipment, as in Rule 5.06(b), which means the base awards for a batted or thrown ball do not apply. Nor does this play involve a pitched live ball becoming lodged in catcher paraphernalia, meaning the associated base award does not apply.
Posted by S. Paige at 12:57 PM 4 comments: