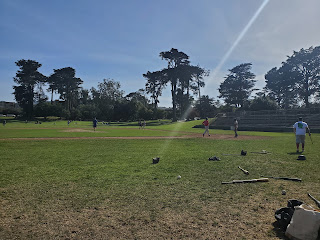 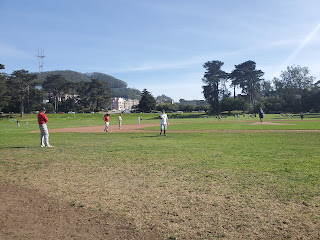 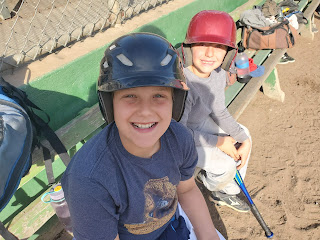 We got to play on the fancy stadium GGP field, since the Olde Tyme Baseballers Club seems to have stopped for the moment.  The band was there for the whole game, and treated us to an extended Take me Out to the Ballgame rendition for the 7th inning stretch.

We had 16 players, 2 of which were lil S. Paige and lil J. Gibson, out for the first time to play for real.  They both took a lot of convincing that our MBC pitchers were not going to be hurling high velocity fastballs at their heads from the jump.  Not sure where they picked up on that, but they were reassured once the game was underway.

Lattig started for the homers and Sean for the visitors, and it was a good match up.  Both were getting swings and keeping the pitch counts low.  Lil J, Gibson scored our first run, after legging out a infield hit, stealing 2nd, taking 3rd, and coming home on a hit.  Lil Paige hit a screamer back at Lattig, who was able to snare it, but the swing was strong.

The visitors had Bob as our leadoff man, and he responded getting on base several times, and we were helped by the sure hitting of Urano and Sean.  The homers had a murderer's row of James and Powell back to back.

We should stop here to mention that Powell hit for the cycle in the game, which I don't know has been done, if it has, probably it was Powell that did it.  His homerun got between Bob and I in right-center, and rolled roughly to Taraval St.  Bob claimed he changed his route to the ball in mid-run, and I said that probably was why we failed to get Powell out by 100 feet instead of 150... In any case, a cap tip to the hitter.*  He hit his triple for the last at bat, and probably could have made it home, but I get it.  He was robbed of another monster hit because we were borrowing James in left and James was playing Powell at about 390ft.

The score was 3-2 for a while, and then it was 5-2, and then Powell hit his homerun, and it was 5-4.  I came in to throw the 7th and 8th, and HR came in after Lattig, and completed the game.  We scored an additional run on a controversial play at first, where Bob legged out a groundball and Greg--the catcher and final say in outs-- called Bob safe.**  Bob came around to score and that run proved pivotal in the 9th inning, when once again Powell hit his triple, and then scored.

John McG got tapped to close the game, and did well, we stranded the last run and the game was won 6-5.***

* All the pitchers threw well, and HR continues his meteoric rise on the bump.

* Lil J Gibson made an out at 2nd, throwing out a runner at 1st.  Welcome to the majors, kid!

* Anna played an excellent 1st base

* Someone, maybe Sean, had a big hit to right.

* Great to see JT out, after a long break (or maybe he was just playing when I wasn't there...)

* A rare off day for Mike Lynch at the plate

* In true gamer fashion, Mike N came out and rehabbed his elbow with the team.  He said he had to do the exercises anyway, and why not do it while he hung out?  Why not indeed! Get well soon.

* I hit 3 hard grounders, that all were outs, and one flare to right, and one K.  Yeesh

* McG said it was the first time that someone asked him to pitch, rather than him asking if he could pitch.  He did a great job.

* We made a successful play at home with the bases loaded, that never happens

* I was doubled off at 1st, when Lil S. Paige hit his line drive to Lattig.  It happened so quick, I don't know if I would have gotten back from just a normal lead off distance, but off the bat, it looked like it was a hit all the way.  Bad optics for the kids.

* The homers also fell victim to the double off, at 1st.

* Nick Smith was nimble as a cat around 1st base, as we all took turns making bad throws.

Sorry for the late entry, but this game faded into the week before, and I never got around to cataloging it.  The big news, I would say, is that Noah B. came out to play, after a long hiatus.  I was searching the archives, and found reference to Noah playing in December, 2017, but I was not at the game.

Before that, it reached back to 2015.  Of course, I searched under his name, not Jamison, so maybe that is the difference... Noah was famous for eating innings as a pitcher, and I hope this appearance was the beginning of another stretch of Noah-ball.  His kids must be old enough to come out too, we need to start grooming the next generation of MBC'rs.

I started again, and HR went for the homers.  He was determined to stick with me, inning to inning, and he almost made it.  HR has improved so much with his pitching, and I am not sure if it is due to MBC suggestions, or just influence.

Not to toot my own horn, but I kept a shutout going for several innings, helped by some extremely good defense.  It felt good pitching back to back weeks, but I felt it for several days afterwards.  We were missing a few of the stalwarts like Tony, Sean, and Adam, who is apparently is in a "band".

Powell had a scary collision with his center fielder in the middle innings, on a no mans land pop fly.  The irony was that it looked like Powell got the worst of it, but it was actually the center fielder who ended up with the concussion symptoms (I have not heard, but I hope he is alright).

Once I had given up a run, I wrapped up after 7 innings-- or what we were calling 7 innings.  In actuality, we lost a inning in the shuffle and decided it was better to just go on with it.  The homers had also lost 3 players, so they were down to about 5.  Mitch was traded at the beginning of the game to us, and then back to the other team at the end.  It was supposed to rain that day, and the sky was getting dark, but we made it to the end.  I think the final was 5-2.

* Don saved the day again, showing up at his usual time.

* Mitch made some nice plays, and was a good sport about being trade bait.

* I found myself having to justify my huffing and puffing on close pitches to Greg and the batter.  In most cases, it isn't that Greg called it a ball when it was a strike, it's that I am disappointed that the batter didn't swing at it.

* Apologies to Mike Lynch, I took his SodaStream bottle last week, and didn't get the email where he requested some fresh water when I returned it....

* Anna played a good game at 1st, and had another hit

* Gaspar pulled a hammy (get well soon), another reminder that despite how we try, we appear to be getting older.