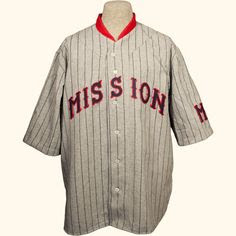 So the first game of the 2019 season was a bust, but lets hope for the best for this coming weekend.

I hope that it is everyone's firm NY resolution to attend more games.  We have had a significant dip in attendance, some of which can be explained by injuries to stalwarts, rock and/or roll, uncertain employment, raising kids or attending to the next generation of MBCers, etc. but for all of you healthy, employed, local, single/have an understanding spouse, respectable-(ish) players out there, what the hell is your excuse?  When I was coming up in this club, Sunday was the one day of the week that I knew what the hell I was doing, and for a few short hours, stopped thinking about all the other things in life.  It's a great feeling.

So come on out, bring a friend, get a hit, make a play. 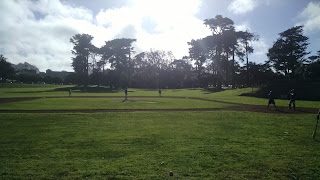 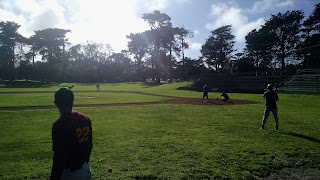 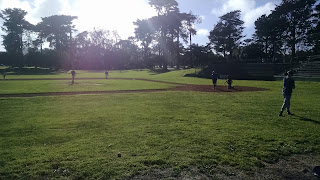 The Omega Game as I have started to call it (the last of the year, get it?). It was everything that you would want in a game, if you were on my team. But the weather was perfect, we had 20 players, and thrills and chills.

I started for the visitors and Greg for the homers, and for some reason my stuff was working. I was throwing slow strikes for the most part, quite a few knuckleballs, and had several innings where I was sub-7 pitches. Nice work if you can get it.

We had two Nicaraguan players with us and one of them was the catcher for our team, with little or no English. We had to communicate via the other player, or with our own limited skills. The hardest part was explaining that he was in charge of the balls and strikes and that we all needed to hear the calls. It took awhile to find our groove but William caught a great game and was fully invested by the end.

This week my team was on the scoring side, as opposed to last week when Chris Powell outscored our entire team. I left the bump after six and the score stood at 7-1 and the lead grew from there.  Sonny took over for me and Sean for the homers.  The game was almost an afterthought to the beautiful weather and good camaraderie.

I remember double plays being turned, and an amazing catch in left field by Nate, which was overshadowed by some fielding errors.... by Nate.  Bob yelling at me to take it easy as I hobbled my way to 2nd on a passed ball (when I run these days I look like Hunter Pence if he was 100 lbs heavier and had legs that were different lengths).

The game went quickly, partly due to my 3-warm up pitches limit, and partly because the home team was not scoring much in the way of runs. Bob had to leave early, which was different.  We had a player in from the Brooklyn Ramblers team, Joaquin, who played when I was there in May.  He fell victim to my patented first ball-knuckleball ruse.  He got his revenge later though.

The final score might have been 12-4, it is a little lost in the time fog at this point, but I know that we were the victors by a large margin.  I also seem to think that there were other pitchers towards the end, but I can't remember who they were.  I just remember it being a really fun game, with a great group of people.  And that is how I want to recall the end of 2018.

* Two double plays for visitors, one double up, one old fashioned round the horn

* William and his cousin told me I needed to learn more Spanish if I was going to play baseball.  Yo halblo espanol, no comprendre mucho...pero yo hablo.

* Nick Smith and Nick W. were on the same team, a team of Nicks!

* Had a great battle with JT, as usual

* Especially after the dropped ball, Nate came to the plate looking like he wanted to hit a 10 run homer

* I managed to score the first run of the game--somehow-- and it really does put into perspective the differences in base-running.  If I hadn't taken 2nd on the passed ball, I wouldn't have been in scoring position when Nate flubbed a hit to left (sorry, he begged me not to mention the errors too much, so I am getting carried away...) and I figured early in the game, no runs yet, a good chance to score.  True, there was a faction that said I would have been dead to rights if they had tried for the play at home, but they didn't and I scored.  My team recorded the third out after that.  None of that would have happened without that initial move in taking 2nd.  Food for thought, if any of these games actually meant anything.

* Bob didn't get hit, which would have the a sentimental choice, I think.

* On my scoring run, when challenged that I would have been out by a large margin, I suggested that if a play had occurred, I could have just taken out Ed.  A hush fell over the team, and then Ed said,    "Well, I for one, would like to see that!"

* Chris Powell was kept from being the center of the game this time, though his presence was always felt

Sorry for the late post. This was an excellent game, close knit, perfect numbers, perfect weather, I was playing, so I'm not going to complain there either.

This has really had one story, and it's one you've heard before: Chris Powell. He pretty much single-handedly beat us. He scored three runs, made about 11 outs at SS, and pitched the end of the game.

The other team, of which I was a part of, scored two runs the entire game. I don't think we had 11 putouts from anyone.

I submit to you, Powell effect.

For the rest of the game, we had a great time. We played good ball and damn, it's nice to have full squads.

Sonny started for one team, Satch for the other. Sonny was great. I was ok. We both threw great ball. But....

* We had a great squad, just couldn't break through.

* There were big hits, just not for us

* Bob had to give John Carey a fatherly talk after he scorched a knuckleball that got caught.

* Abe was strong in bat and glove.

* Adam played first well but I'm all gimped up, so it was a race on ground balls to the right side.

* James hit right-handed almost the whole game. Not an endorsement of our strength

* We had the pleasure of Anna, Nick W.s friend, being on our team. She was just shy of a hit about three times

* The winning team had three double plays. You can't ignore that.

* Gaspar was in the mix, doing exactly what he does