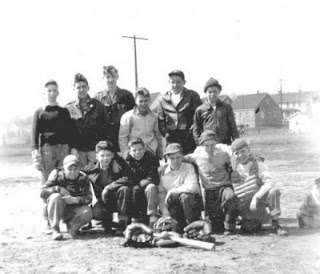 As Satch was drinking champagne and making small talk about the remoulade on the white bean medley, apparently there was a baseball game in SF a few weeks back. Our own Mike Gaspar was there. Here's his report:

It was a fairly nice day for our weekly game. The sun was shining in Balboa Park, but off in the distance we could see the fog bank edging closer and closer as the game progressed. We had a good turnout, 16 in all, and even though several regulars were MIA, Dustin brought friends and relations in to fill the holes and the game was on.

Dustin and Noah formed a formidable battery, making it a tough home squad. Mike Lattig, he of the .800 batting average was even a swinging victim. Sean, the tough lefty, went to the hill for the visitors, and was more than up to the task. Both sides went down quickly in the early innings, then in the fourth the visitors scraped together a single and a booted sacrifice bunt, and suddenly the door flew open. Before it was closed 5 runs had scored and the visiting squad never looked back. The Home squaders started a few rallies but could never come close to catching up. As the fog enveloped, our surroundings darkening with the close of another Sunday interval , we were all happy to call it a day....until next weeks game. -Gaspar


See you on the field, Satch is loose, relaxed, tan and lovely....

A Close Game, A Sunny Day For those of you staring at the endless void of fog and wet right now, it is hard to imagine that just three days ago the City was bathed in sunlight, and happiness. Under these conditions did we, the MBC play our weekly game at Balboa Park.

As karma for the two weeks ago that the game ended early, the previous contest ran over into our time, and so when we did get on to the field, there was a lot of hurry and not much planning on who was on what team. AS a result, the home team had a squad that looked invincible, Lattig, Kvoriak, Mitch, Greg, Nero, Johnny, Satch, New guy Steve, Bob and a surprise guest. And as you may have gathered from the preamble, it was not the massacre that we thought it might be.
Satch was back on the hill, after a week in Orange County (don't ask) and felt loose. There were various new guys shuffling around, including east coasters with sons in tow, two brothers who came out to the Sunset once, and then, Brian Girgus? He showed just to "play catch" and ended up of course playing the whole game, in cutoffs, pendleton shirt and tennis shoes. But it was great to see ol 90% mouth, 10% muscle out there, and he seemed to have remembered how to catch a ball!
The collective bane of our hitting existence was pitching for the other team, Dustin, and for five long innings, we could not get anything started. Every time someone would get on base, there would be some sort of fuckup, or fly out, or usually strikeout, and the threat would be over. Stranded baserunners was our forte. The most egregious was a basesloaded, one out occurrence, and while we are all gentleman with various defects, I think most of us (including some of the opposing team) thought Rick was safe at first. Let us say that the umpire can be swayed by exciting action.


This score haunted us through the game, couldn't score a run. Finally, some luck, Dustin had retired and gave it up to Carter, the new young guy. Carter had some trouble with the strike zone, hit Satch (almost twice), and we finally got some luck to go our. way. We go up, 4-3. Then Dustin showed up and hit the first pitch into Siberia, and the game was tied, 4-4.

Satch gave up after the 7th, and handed Johnny the ball to close it out. Johnny did what Johnny do, which was hold tight, and make the pitches. I have always been amazed, expecially at SQ, that Johnny can get the guys that are the hardest for Satch to get. Different strokes they say.

We go to the bottom of the eighth, we got baserunners. We have seen this situation before. 1st and 3rd. Satch lumbers to the plate with the Pete bat, and slaps a comebacker. It bounces off Carters glove, the run scores, Satch running with all of his might to first, makes it. 5-4. Satch steals second, 2nd and 3rd. Girgus is up, promised he would bunt to keep from striking out again. We all wait for it. It doesn't happen. He strikes out again. Got to come out more often, Brian.

We got to the top of the 9th, clinging to a one run lead. Johnny wipes the sweat from his brow, sets his jaw to granite, and sends the visitors down in order, the game is over, the sun shining, the wind tousling everyone's hair....

* Oliver and Doc look to be making a comeback, which is great, once we can get used to a umpire.

* Girgus, just because you are in 5 bands doesn't mean there isn't time for baseball

* Dustin, again with a great game, both batting and pitching

* Mitch at shortstop, while the grounders were a little shaky, Mitch easily saved 5 bloopers from becoming hits

* Sorry to the kid I struck out, its hard to throw light and low sometimes, you made a great play at short though!

* Noah's strike zone that shrunk monumentally once Doc stepped in

* The other kid hit my knuckleball. Don't ask why I was throwing knuckleballs at kids.

* Everyone who fought the sun in the outfield

* Blueberries AND Cuties, thanks Sean!

* Sean's catch in the outfield, although I think there may have been a little drama at the end

* The arrival and departure of Carter and Will, have fun on the East Coast

* Turning double plays, disputed or not, is still pretty cool

* My own terrible base running, that somehow was redeemed by inducing a bad throw (you like that?) and scoring the tying run. I know, I know, but it looked like I was dead in the water, from my stampeding point of view.


Have a great game, out at the Cop Field again, usual time. I'll be in Sonoma, half-feigning good cheer and remarking "Of course I am having fun, what else could I possibly be doing at 3pm on a Sunday!????"

Satch was dragged and fashed from a Orange County wedding, and really wanted to be there, but it just wasn't gonna happen. Sounded like a good one, and here to relay the day is Mike Gaspar:

It was a nice enough day. A bit overcast. But plenty warm and even a bit of humidity hung in the air. Never the less, as three o'clock came, we still had only thirteen players. Ever hope full we started some infield practice and before too long our fourteenth player showed up and it was game on!

Johnny took the hill for the home team. Resplendent in his A's uniform in honor of Rickey "the greatest" Henderson. J.B. had the good curve working. And had an easy first inning. The visitors sent Noah to the bump and he had the full arsenal going. Especially in the early and middle innings.

Unlike last weeks game this was a tight affair early on. the visiting team scratched out a couple of runs early on, only to see the homers tie then take the lead in the middle innings. The home team then iced it with a barrage of hits and runs in the seventh. The visitors made a comeback try in the ninth. Aided by some shoddy defense on the part of a borrowed player (yours truly) and the fact we decided to take some walks. In the end though the final tally was visitors 7, homers 13. And i dare say fun was had by all !

Brian Cagle: Several hits, including a key two out double that basically put the game out of reach.

Owen: Good day at the plate. Even his outs were "loud".

Johnny: His good pitching kept the visitors in check.

Oliver: Amazing "juggle" catch in right field. Way to keep your eyes on the ball kid.

Noah: Pitched great for five innings. Then lost a little steam but stuck it out the rest of the way.

Doc: Thanks for umping. You did a great job !


See everyone next week, swear to the Maker(s) mark