Three weeks in a row, can't believe it!  I had the two lillun's in tow, but they behaved themselves pretty well, and the game moved along quickly enough.  Late though we were, we made 14, which was a nice feeling, having been at plenty of games at that horrible 13 man mark.

Tony pitched a masterful complete game, the majority of which was a shutout.  Our team couldn't have hit their way out of a wet paper bag all day, and Tony was mixing and matching everything under the sun.  His sidearm rising slurvy ball found the strike zone consistently, and he got us to hit the ball in the air all day.  He was great.

I was given to the other team to provide much needed bat power, and I sucked at that all day.  0-5, I do believe, only once did I hit the ball on the ground, and it was right to Chris Powell.

There were only 7 men on each team, and yet the homers had 4 lefties- Sean, Phelps, Lattig, Tony....yeah, who ever divvied up these teams must be a sadist.....Me and the boys played right field for most of the game but never got a fly ball.  The one inning we played 2nd base, there was a fly ball to right, and then Chris Powell of all people hit a scorcher right at me and the kids, I prayed for a true hop, and got it, and threw to first.  The boys wear helmets when they are with me on the field, but they may need hockey masks too.

No matter who was pitching the homers would not stop their hit parade.  Sonny pitched the first 5 or so, then Nick W. came in but had trouble finding the strike zone. I volunteered to pitch the 8th, knowing that there would most likely not be a bottom of the 9th.  I had held back some cookies for the boys to bribe them to sit quietly on the bench while I pitched.  It worked and the inning went well enough, although no one could really stop the home team.

The decision had been made in about the 5th inning, with things goign the way they were that we would call the score 8-8, rather than 8-0.  This was done to try and foster some competitive spirit amongst our team,but even charity runs could not induce us to play any better, and the homers kept on scoring runs, and by the end of the 8th it was 12-8.

We did finally score a run, which was a small bit of redemption and a feel good story on it own.  Liam, the older McGrath boy, had a trying day with Tony, somewhere in the ~3/4 K range, and this was his last chance.  Sonny hit a nice sharp single, and was dancing off first, and then second in his surfer gear, ratty T-shirt and black cutoff shorts.  Liam laced a line drive into the gap in left, and Sonny raced home.  We had finally scored a run, and Liam had avoided a sombrero.

The only run of the day for the visitors it turned out.

* It wasn't that we didn't get some people on base, we just could not score a run

* Don had several nice hits, and was always stranded

* Chris Powell had 3 doubles and a triple, at least

* Don was HBP once, maybe twice

* In the 8th, Don was awarded the SS bad hop trophy for two in a row and that jigged instead of jagging.  Luckily, they didn't hit him in the face

* Apparently Abe is only a hitting machine when I am facing him, not when we are on the same team....

* Thanks to Greg, John McG, Liam for doing the catching

Let's hope that a few players are inspired to show up next week so we can have a proper game? 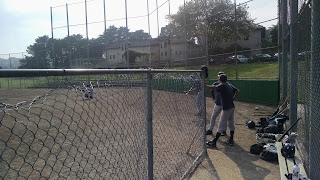 Sorry for the late additions, time just keeps on slipping, slipping, slipping, into the future.  The Labor Day game,which was my first in a little while, was well attended, which made it both an anomaly and a pleasure.  Sorry to say that the numbers coming out for baseball have been pretty paltry lately, and we have tried our best to cull the email list to only those that have a reasonable chance of showing up, or at least want to stay up to date on our game.

I will attempt to consolidate the games, for brevity and clarity: I pitched 10 innings on 9/3/17, and lost the game after having a shut out for 6 innings and leading the game for 9 innings.

Other than my inability to get some people out, and the hitting of the other team, I was helped along in my loss by an uncharacteristically dropsy infield, where pop flies were treated like the other man's job, and ground balls found the wrists and arms of players rather than their gloves.

As the visiting team, we scored one run each inning in the top of the first four innings.  And the score remained 4-0 through the first 6 innings, something that I was very proud of, and as we know, pride does indeed come before the fall.  It was palpable to Greg and myself when the momentum suddenly changed, a tweener begat an error, begat another error, begat a ground ball that was hit softly enough to be an impossible play, et cetera.

The home team deserved to win because they did not give up, they kept their heads in the game, and and capitalized on the chances they had.  After Sonny started the game, Nick W. pitched several fine innings of relief work to keep the game close.  They tied it up late, and then in extra innings, Jimmy's New Guy friend put a softball swing on a do nothing changeup and hit it over the left fielder (who was also on their team) for the win.

* Elvin was good at not letting himself out of the at bats, and I don't know that I got him out (at the plate...)

* Bob sneered his way through the game

* My favorite part was Tony leading off an inning with me behind him, and I told him if he got on that I would bunt the second pitch.  Well, he got on to the tune of second base, and he and I traded knowing nods, I placed a bunt down the third base line for an uncontested infield hit.  He was hoping they would try and then he could have scored from second.

* Don made some much needed catches in center field

* Abe was his usual dependable hitting and field self

* Greg and Gaspar did a great job behind the dish, and I was sorry that I was not able to get the win  for them

* It was a beautiful hot day at the yard, hot weather makes it easier to pitch for sure

*One particularly galling play, Jimmy was covering in left field, and was playing what appeared to be an extreme Gaspar shift.  Except that Gaspar was not up.  So a routine fly ball to left became a triple.  I am all for cheating but you got to sell it.

* I almost didn't make it to second base, because I was talking to Adam, you gotta watch that, he draws you in

* I also made another bonehead running play, I really got to start asking more often how many outs there are.  I think I am used to always being up with two outs that I assume that is the default when I am on base.  In any case, I was on second, ball hit to short left, doubled off.  Fuck.

So this one happened yesterday, a bit more fresh in my mind.  The boys were with me, so we got out early to have some time to play with on the improved playground at Balboa.  There was some beer league championship game happening on our field, and they weren't giving up before it was over, so we schlepped all the gear to Camp Swampy, which I don't think we have played on since April.  We only had 15, and the 3 McGrath boys had to leave early, so we tried our best to get as much in as possible, before the game turned back into a pumpkin.

The boys insisted on playing on this huge fallen log, which was OK, other than the jagged pieces of broken branches that were lying around.  But they were occupied at least.

The homers, which was my team, had lanky lefty Liam to start, and he looked good, snapping off some quality pitches.  He threw hardest, of course, against his brother, Aiden, which is to be expected.  Aiden did not go down without a fight though.  It was great to have two new generation players, a few more years and my boys will hopefully be out there too.

Lattig started for the visitors, throwing breaking stuff all over the map, and then when you think you are going to see a curve ball, he would pour one in on the outside corner.  We jumped out to a lead,  raised it to 5, the visitors came back slowly and surely, and I think by the end of the game which was about 6 innings, the score was either 6-4, or maybe even 6-5, us.

Mitch and Greg caught the game, and did a fine job, especially with a lot of balls in the dirt.

* James tattooed one to me in left while the boys were out there with me, luckily it came right at me, and the boys had helmets on.

* Chris Powell had a rare dropped pop fly, which is usually his forte

* The visiting team was stealing bases all over the place

* Lattig had an at bat with at least 6 foul balls

* John McG had a good game, almost took out his own kid with a slide, and was the lynchpin to having the game in the first place, vis a vis his progeny

* Mitch hit a gapper in right that I thought might be an in-the-parker.  He settled for a triple

* Nick W. came out with is two daughters, thenone of them got stung by a bee and they all had to leave.  I don't know if he got a chance to bat

* The one silver lining on the shortened game was that the boys got to do a lot of hitting on the diamond after the game.