It was a cold foggy day, amazing, since it was sunny and hot everywhere else in the world.  The other amazing thing is that we had an upwelling of players, 21 by my count.  I would like to say that it was because of my public shaming of those who showed up for the BBQ, but that probably wasn't it.

Interestingly, we also were missing a lot of the regulars, and yet still had a lot.  I brought along the Lil's, who played right field, and Lil' Josh was inserted as our 10th place hitter, for real.  Tony grumbled a little, but seriously, we have plenty of players who go months without getting a hit, how is this really any different?  Lil' Josh ended up playing right field on his own once I started pitching, and made a great hustling back up play on a ball that got past 2nd base on an overthrow.

On to the game.  It kinda sucked.  I mean, any day playing baseball is a great day, but our team was cursed with a case of the drearys.  We just could not get good wood on the ball, and if we did, Powell would hoover it up and throw us out.  B. Phelps started for the visitors and he was hurling well, not surprising since he has had several months off to rest his arm.  Our team was not without talent in theory, but we could not string together enough hits to score a run.  Even when we got a rally going, we could not sustain it, or we would hit into a force out and lose the lead runner, or, well you get it.

On the other hand, the visitors were smacking the ball all over the yard.  Sonny had an off day on the bump, and the other team took full advantage.  At one point they had 5 extra base hits out of 7 batters.  They seemed to be aiming particularly for the left field line, and Nate (who was out for the first time in a long while) spent his time chasing hits.

By the middle of the game it was 7-0.  We managed to finally score 2 runs but that was as far as it got.  I took the ball from Sonny, who proclaimed that he had been smacked around enough for one day, and finished the rest of the game.  I didn't stay clean but kept the scoring to a minimum.

* Every visitor probably had a hit.

* James came out, and played a good center field

* Thanks to Chris L, Gaspar, Bob, and SONNY! for catching

*The olde tyme guys were back, I wonder who they paid off?

* The homers had a lot of Ks from guys who don't normally K.

* Poor Nate, so much running

* I struck out Loren on what I thought was strike 2.  Sonny had asked me what to call the pitch before  and I said that I wasn't the right person to ask. I guess he decided it was a strike.

* Bob made a nice play in left field

* Urano tried to carry us on his back, but one guy can only do so much

* I wish we could have given the visitors a better game, but oh well.

What do a SF Dive Bar, Barry Bonds, and this blog have in common? 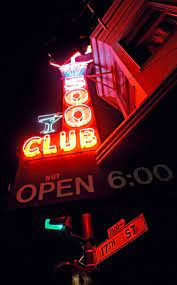 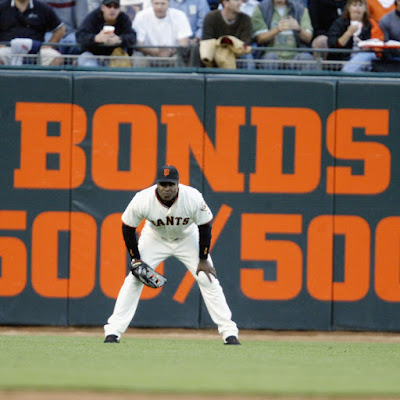 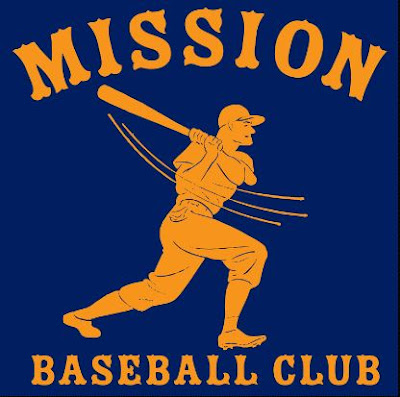 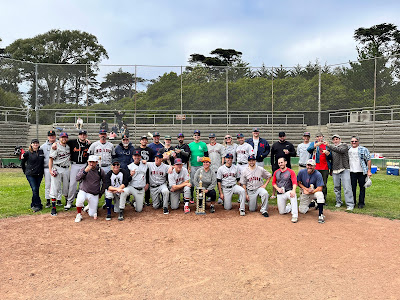 What a day for a ballgame, as long as you know what it is like in SF in July.  So, it rained on the Saturday, and the grass was wet, and there was a heavy moisture in the air for the beginning of the game.

The good news was that we had a lot of players come out of the woodwork for the games, making us wonder where the fuck these guys are the other 51 weeks of the year when we play Havana 6s.... The bad news was that no one thought to bring a grill to this BBQ.  Panicked phone calls were made, and we ended up fine, but it was pretty ironic.

Satch started for the visitors and Sonny for the homers, and we bandied it back and forth.  We took the lead early, and kept it.  Our team was mostly newer guys vs. the old guard, though with a few notable exceptions, mostly Chris Powell, Don, and Satch.  Powell did his thing, though he clanged a few, probably nervous with his wife and kid watching :)  But the plays he made were outstanding, including a sliding ground ball stop, and initiating a much needed double play.

I don't want to toot my own horn, but I threw a complete game, and had a few sub-8 pitch innings.  The key, once again, seemed to be batting practice fastballs, and let the human factor do the rest.  It works!  The finest moment was a bases loaded, no outs jam that I got out of, and then had the same thing again the next inning, and escaped with only one run scored.

We stretched our lead over the game, and never really let the homers in close, though they did score one in the 9th.  Our last two outs featured a surprise guest appearance at first, which was awesome, and we held off the homers and finished 6-3.

Greg, and Lisa C brought grills to save us, and Nick W had his camping stove full of carnitas, so we did alright with the food.  Thanks again to Mr and Mrs Tiemann for the organization and use of their reusable picnicware, and thank you to all that brought something to share.

The AOY trophy this year went to a hard-nosed scrapper who goes by Marcella Gries.  For those that don't know, she was the recipient of a Sonny fastball, right in the face last December.  She took it like a champ, and even made up a Xmas card with her cat and her black eye. 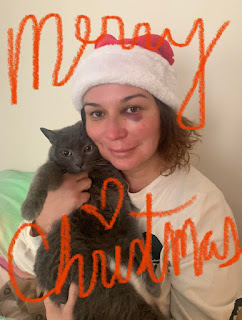 That was an AOY move if ever there was one.  So we decided to split the award, she got the trophy and the recognition and Sonny got to be the Asshole with the scepter, some guilt, and a few vague threats of retaliation.

The Rookie of year award went to the Band, who has entertained us for the past few years, and was much deserving.  They stuck around for the whole time, and shared our food and good times.  They are a worthy addition to the game.

Always tough to get back in the saddle for game 2, which saw Nick W and Tony square off.  We swapped places, so that we were now the home team.  Nick was throwing good, as was Tony, and it was a low scoring affair, with the visitors ahead 4-2.  HR and Mitch came in after Tony, and Daniel was pitching after Nick, when I had to leave in the 7th inning.  I turned to the team to fill me in as to who won that game, and Tony reported that Mitch got burnt in the 8th inning, due to some costly errors and the homers went up 6-4.  Mitch kept his cool and didn't lose it even though it was ugly.  And that's was the way it ended, homers 6-4.

* Great to see everyone!

* Iron Man Award goes to Chris Leavitt who caught both games, one for each team!

* Mike Lynch made a classic play at 3rd, backhand on the line, turn and fire to 1st to get the runner

* Doc came out!  He didn't ump or play, but it was great to see the Gray Ghost!

* Poor James took a ball to the chest that thumped so hard, we felt the concussion on the bench.  he was stealing home on a passed ball and Mitch threw to the plate before the pitcher could get there: THUMP!

* Daniel made some great catches in the outfield

* Sonny has developed some sneaky breaking balls, which make him much harder to hit

* Loren made his yearly appearance, refused to play defense until necessary, and wore track cleats. No Bieber bag though.

* Another long ago, Noah, came out and hasn't missed a step, though he might argue with that evaluation based on his crippled quad swing

* I remember the Daniel-Mike N at bat, and yes, Daniel hit him multiple times, some skimmed, some thumped

* The HR shift is like a reverse augmented Gaspar shift, right field play in, almost between 1st and 2nd, please remember it

* I want it noted that both teams did a great job of NOT swinging when they had a teammate stealing a base.

*  In addition to his catching 18 innings, Chris L also made a nice catch on a pop foul, and had soe well struck hits

* James cursed one of my new bats by using it before me, marking it up, and getting an out.   I broke the hex by the second game, but man, it was close call.  You don't want to let that fester....

* Hope everyone stocked up on Advil, ice, and beer.  It was a great doubleheader! 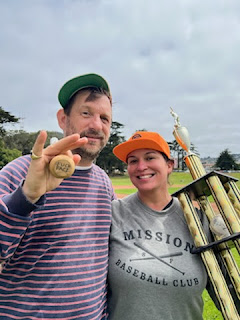 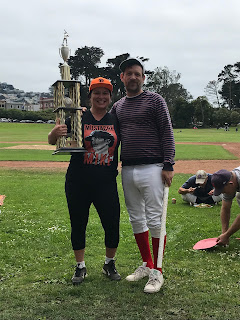