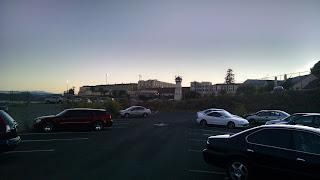 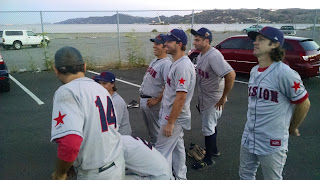 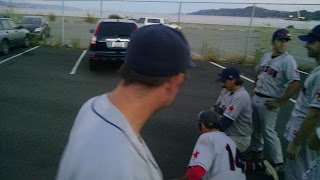 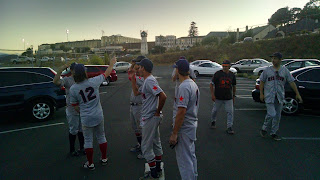 Two things a Californian is always prepared for.  Shitty traffic and beautiful weather.

We had both on Thursday as we trotted out the squad for the final SQ game of the season against the SQ Giants.  Greg was the late guy for once, amazing us all, but we managed to get our ID’s and equipment cavity searches done in a good time and first pitch was probably before 6.  The only SQ rookie this time was Ted, a visiting player from the Brooklyn Ramblers squad, out on the West coast scouting out the playing conditions and general vibe of the MBC.

Sean started for the homers, and was contending with what might have been the world’s biggest divot in the mound.  We jumped out to a 2-0 lead, helped by a wild pitcher who had trouble finding the strike zone (he left with a knee injury soon after) and Sonny’s solid line drive double down the third base line.

Sean felt the need to walk the bases loaded in order to get out of the 2nd, another time tested MBC tradition, but he escaped unsinged.  The word had come down from the skipper that we would be doing 2 innings a piece; throw a lefty—righty—lefty combo at them.  Satch came in for the 3rd and felt good, the warm Marin sun sure helps the body get loose.  It occurred to me last time I played a weekday game, that less warm up, meant more game playing time, so I tried for three warm up pitches and then get on with it.  My reward was I got to throw 4 innings, since we had more time than we usually do.  I was also aided by some excellent defense, especially Sonny, Mitch, and Chris.

The umpire was one of the better I have experienced in the pen, he didn’t have the usual SQ low ball strike.  The only contention I had was that he gave up on a sweet change-up, same as the batter, and it sailed right over the heart of the strike zone.   Given its slow nature, by the time it got to the plate the ump had stood up and started to call it a ball.

We kept a steady pressure on the new pitcher, Ru (ben), who is usually the catcher.  He was having trouble with the mound as well (Satch’s legs were just long enough to get over the deep part of the hole).  We tallied a 5-0 lead going into 7th, which was our last inning.  Gaston was charged with the duty of protecting the lead and saving the dignity of the MBC.  But no pressure.

The Giants did their best to mount a comeback, but were hindered by the first batter popping up on the first pitch.  That first out is crucial.  A possible double play got the guy at second, but then turned into a play at the plate.  I think Greg got the guy (he landed on Greg’s glove before bouncing on the plate).  The umpire disagreed and the Giants pushed two runs across the board before running out of steam as Gaston got a swinging strikeout to finish.

We shook hands and reveled in a winning-ish record for the first time in our SQ history.  Back through the gates, same old jokes from the guards e.g. we get to leave since we won, etc., and into the parking lot.

At the post-game meal, we debated on the merits of winning versus losing in SQ.  With a few dissenters, the general thought was that while winning is fun, losing a close game to the Giants is somehow better.  In that situation, we get to play ball, have a worthwhile experience, and leave back to the safety of our lives.  The prisoners get to say they won and— for a few fleeting moments—feel decent about themselves.  Since most of the people reading this are not currently incarcerated, it’s probably hard to fully grasp the weight of that.  Not discounting the (sometime heinous) choices that these guys have made, a little restorative power probably goes a long way in the Q.

* Proud be a part of a strong pitching performance

* We never had the SQ inning where our knees turn to water and every ball is clanked around three times.

* Not a big turn out, too bad more fans couldn’t come out but apparently Thursday is school day, so lots of guys in class

* After Chris walked for the 3rd time, I whispered to him as he passed me that I was going to bunt on the 2nd pitch.  He didn’t hear me, but he broke for second on the 2nd pitch.  I was all excited and laid down a bunt, that would have been a sure fire infield hit without a great play from the pitcher.  Only after did I realize that I probably should have taken that pitch and then bunted him to third.  I forget there are people on the MBC that can easily steal bases; I figured I was helping him out.  If it was me stealing, I would have appreciated (and required) the distraction.

* Ted comported himself with dignity and grace and scorched (see: cue shot) a line drive to second for his first hit on the inside.

* Gaston was hit with a pitch and looked relieved that he got to take a base.  His nickname has expanded to Low-Hanging Prison Fruit now.

* Sonny tried to score from 2nd on a single to right, which is a lot like saying a single to the second baseman.  He was twelve feet from the plate when he was tagged out.

* If they hadn’t hit so many balls directly at our defense, the game might have been very different.

* Brian sold out the body trying to catch a flare to short left.  It managed to hit him in about three places before dropping.  But it looked good...sort of.

* The wind was playing a lot of tricks, Chris ranged all the way to right field to catch a pop up that started near the mound

* Ke Lam looks like he is getting out soon, hopefully a long range successful rehabilitation story in the making.

* The SQ third baseman made a number of great plays

* In the same vein, the SQ infield turned 2 double plays.

* Mitch didn’t get beaned for the first time in SQ that I can remember.  He is known now as the Prison Bob.

* Thanks to the Giants, Elliot, and SQ for another good year on the Field of Dreams.


A hell of a game, if your name was Sean.

Just hell, if you were the team facing Sean.

Yes, indeed, Sunday’s game proved that one must never get tired of being surprised.  For starters, we had 12 people show up for a game at West Sunset, on a day that was as close to perfect as they come.  Greg was injured, and so he selflessly volunteered to play all time third base.  It was dubbed as the Heads vs. the Squares.  I tell you, I guess there is something to this clean living thing.

Satch started for the homers and was excited to pitch again, an excitement which didn’t last too long.  The other team brought their bloop game, and when only you have two outfielders, bloops turn into doubles.  And then the visitors also hit the crap out of the ball.  So there was that.  And our team forgot how to catch the ball for a while.

Sean started for the visitors, and didn’t really break a sweat until the middle innings.  After we had suffered through a 5 run barrage, he set us down in order with about 8 pitches.  Not fair.

The game went fairly quickly, as you might imagine, and the only person on our team that managed to get a hit in the first 2/3 of the game was Tim.  But none of us could do anything.  Literally.  Gaston finished with a 0-6, as did Dustin.  Between the two of them, they had 7 or 8 strikeouts.  Sombreros abounded like scrambling banditos in The Treasure of the Sierra Madre.

I bowed out after 7, gave the ball to Gaston and tried to figure out how the score was really 11-0.  Gaston minimized the damage for the rest of the game, but that is a lot like telling the guy who stepped on the landmine that his hat was untouched.

So we get to the 9th, and Sean still hadn’t given up a run.  That was our focus, just break up the shutout, don’t give him the satisfaction.  And to his credit, after a base runner got on, he didn’t hold me on; he went from the windup to improve his pitching, not thinking about letting me have 2nd and 3rd (defensive indifference, as everyone on their team was happy to remind me).

And we still couldn’t get it done.   I considered if I could make a break for the plate and take out Carter, going in shoulder lowered, but that’s not the way we play….but I considered it.

So down we went.  I am proud that we were part of this game, even if it was embarrassing.  ‘Cuz I was there.

* MITCHED!  Mitch managed to steal at least 3 hits from me, by playing me perfectly in the gaps each time, left center, right center.  Ironically, if we had 3 outfielders, those hits would probably have fallen.

* Carter made his own bat with a lathe, and it didn’t break!  And he got a hit with it!

* Tim was our only offensive threat, and he caught the whole game!

* I did manage to strike out Carter, twice, the second time telling him that the same slider was coming.  He didn’t believe me, I guess.  I had resorted to Psy Ops to get outs by that point in the game.

* Bob was hit, as was Carter, our two ball magnets

* We had to fill in at 1st for the other team, to which Abe refused to hold on the runner, increasing his AOY chances

* Thanks to the noble players who braved the beautiful day and lack of traffic to have a game: