A Word from JT Tiemann on the 2014 Giants

Since he did such a great job summing up the first winning season, I thought it would be good to solicit a few thoughts from JT.  Little did I know he had already been hard at work creating his next literary masterpiece.  So, in lieu of trying to build up the tension, and hear myself talk some more, I I shall eschew my loquacious nature, and be brief. 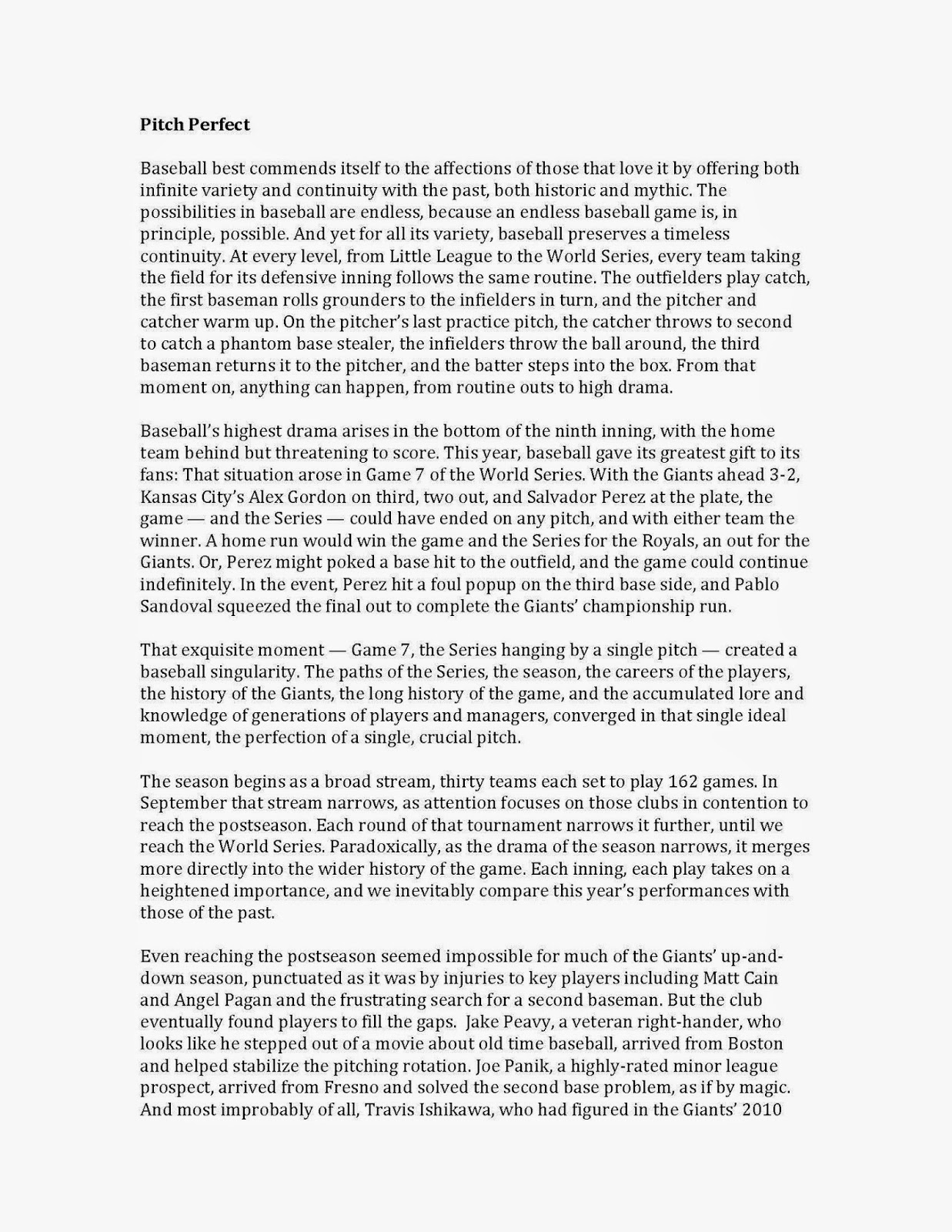 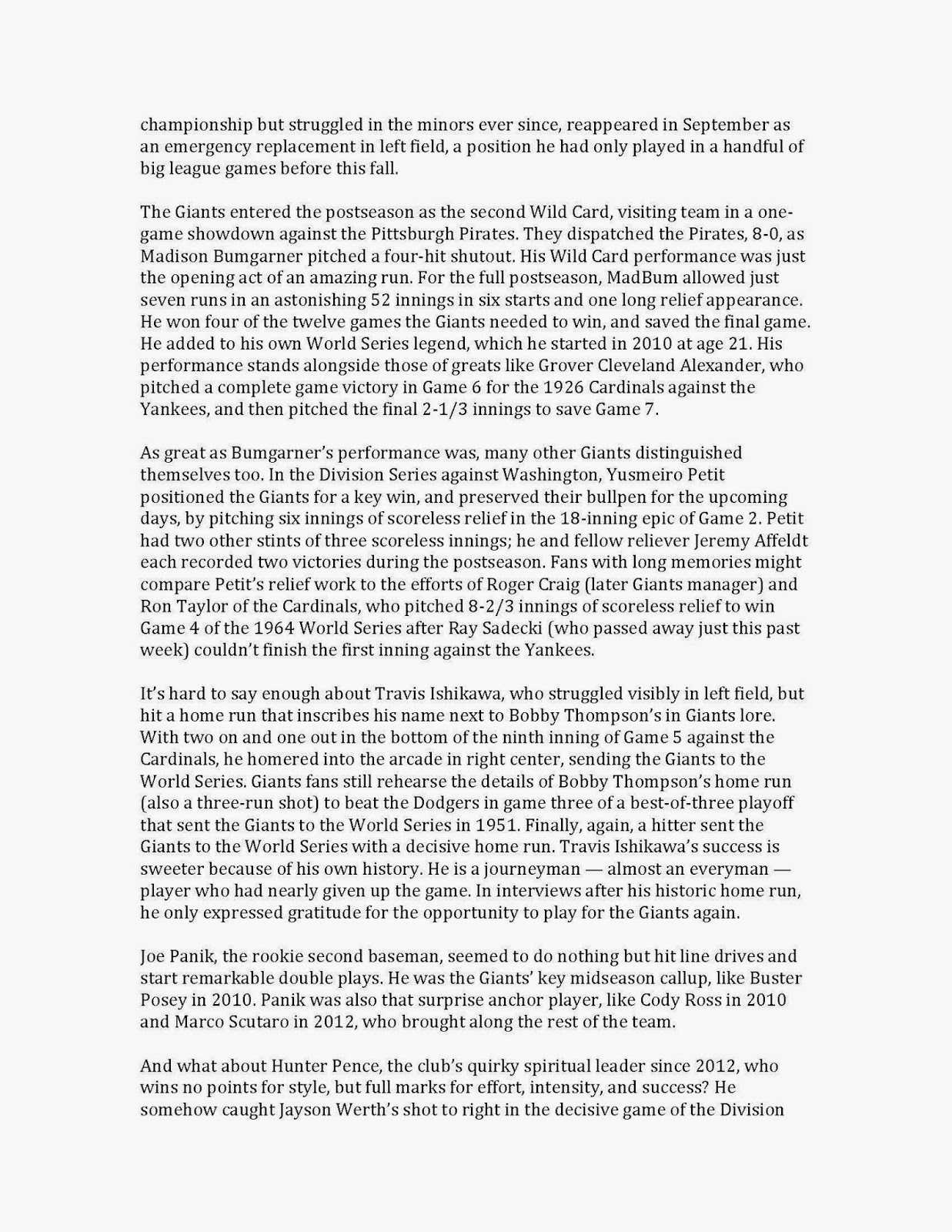 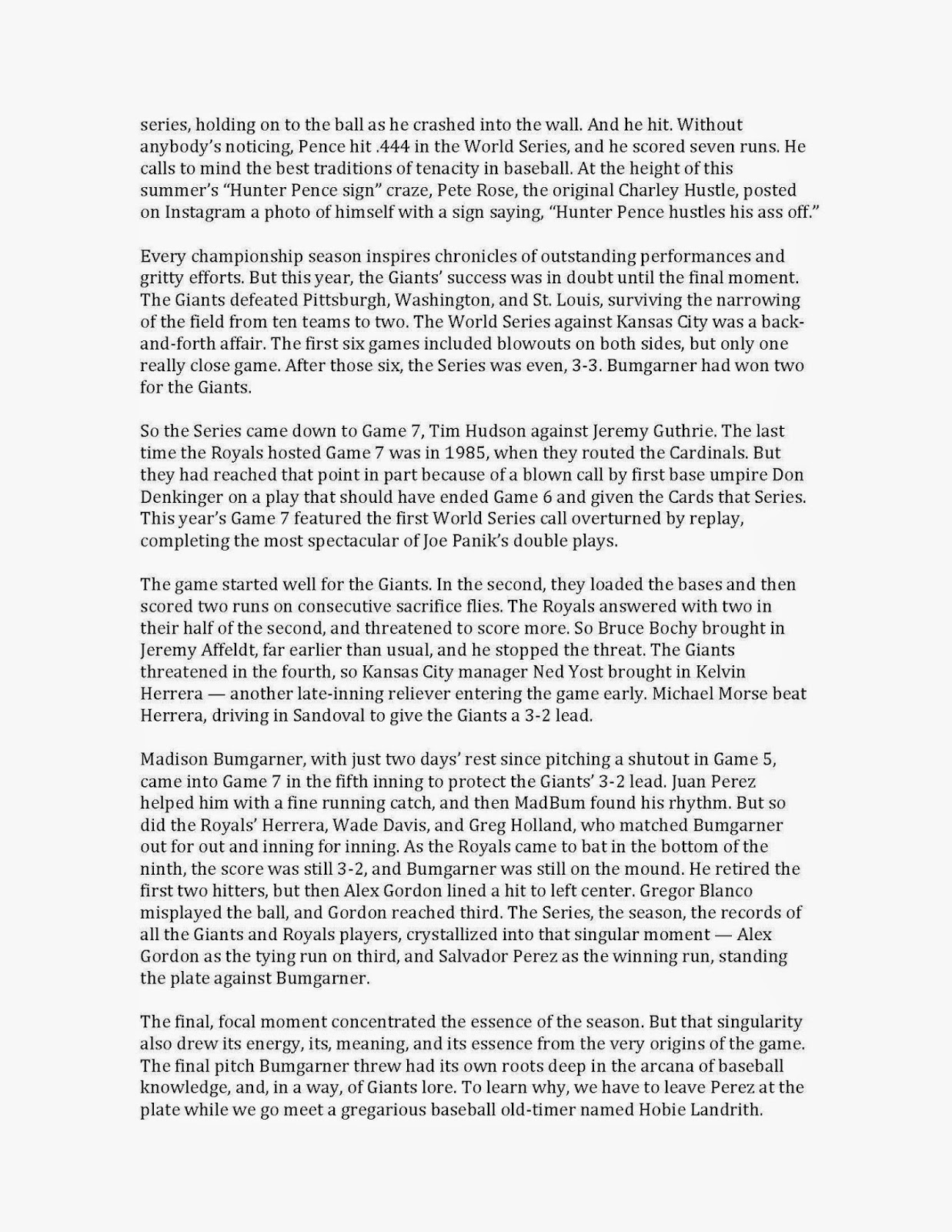 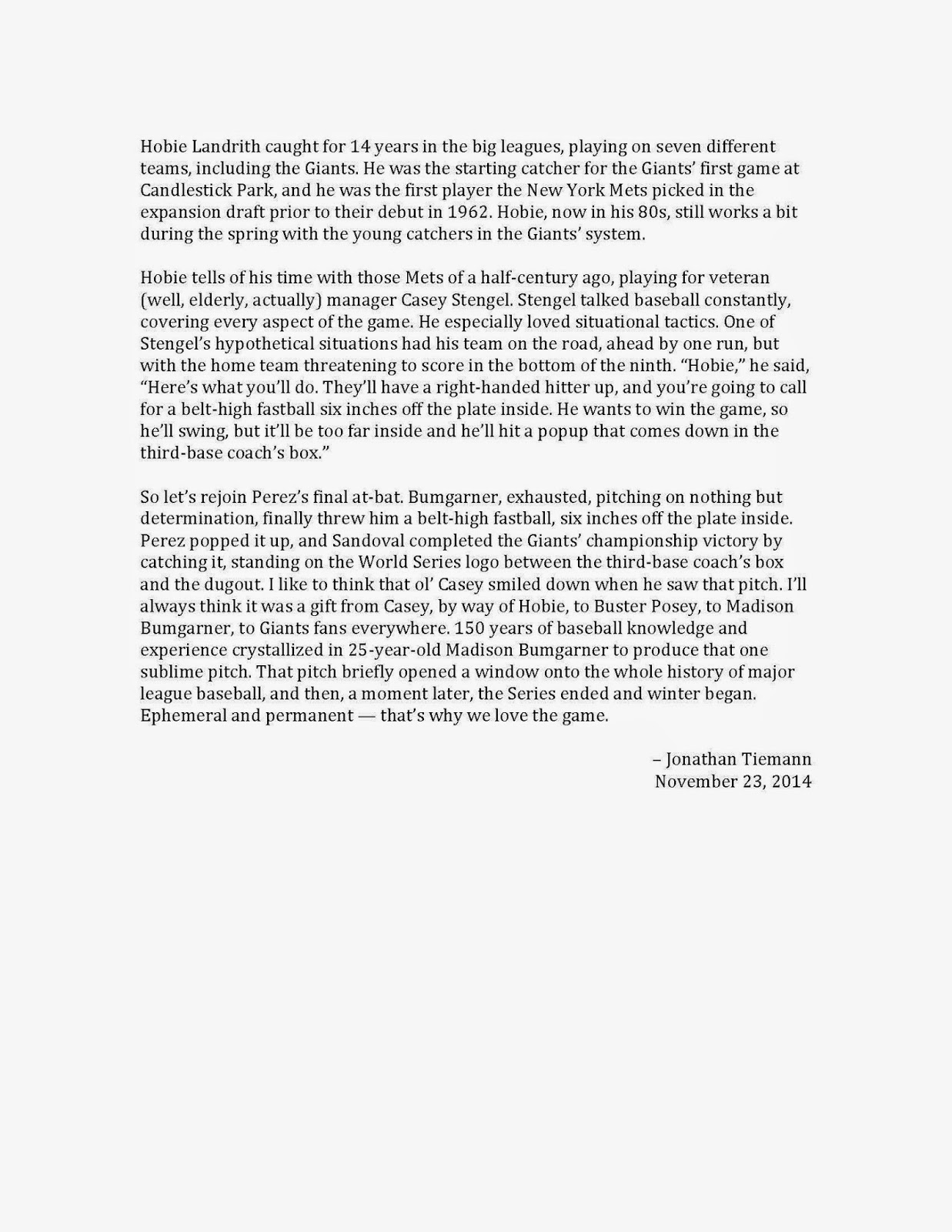 You want shirts, we got shirts!

Resident MBC Esquire and dad of future Hall of Famers, John McGrath sent me this picture, of Semi Pro, Independent and Defunct League Shirts that are available at Haight St T shirts.  Looks like a lot of the selection that one can get at Ebbets Field Flannels, without the wait.

Check it out if you are interested.  Thanks John! 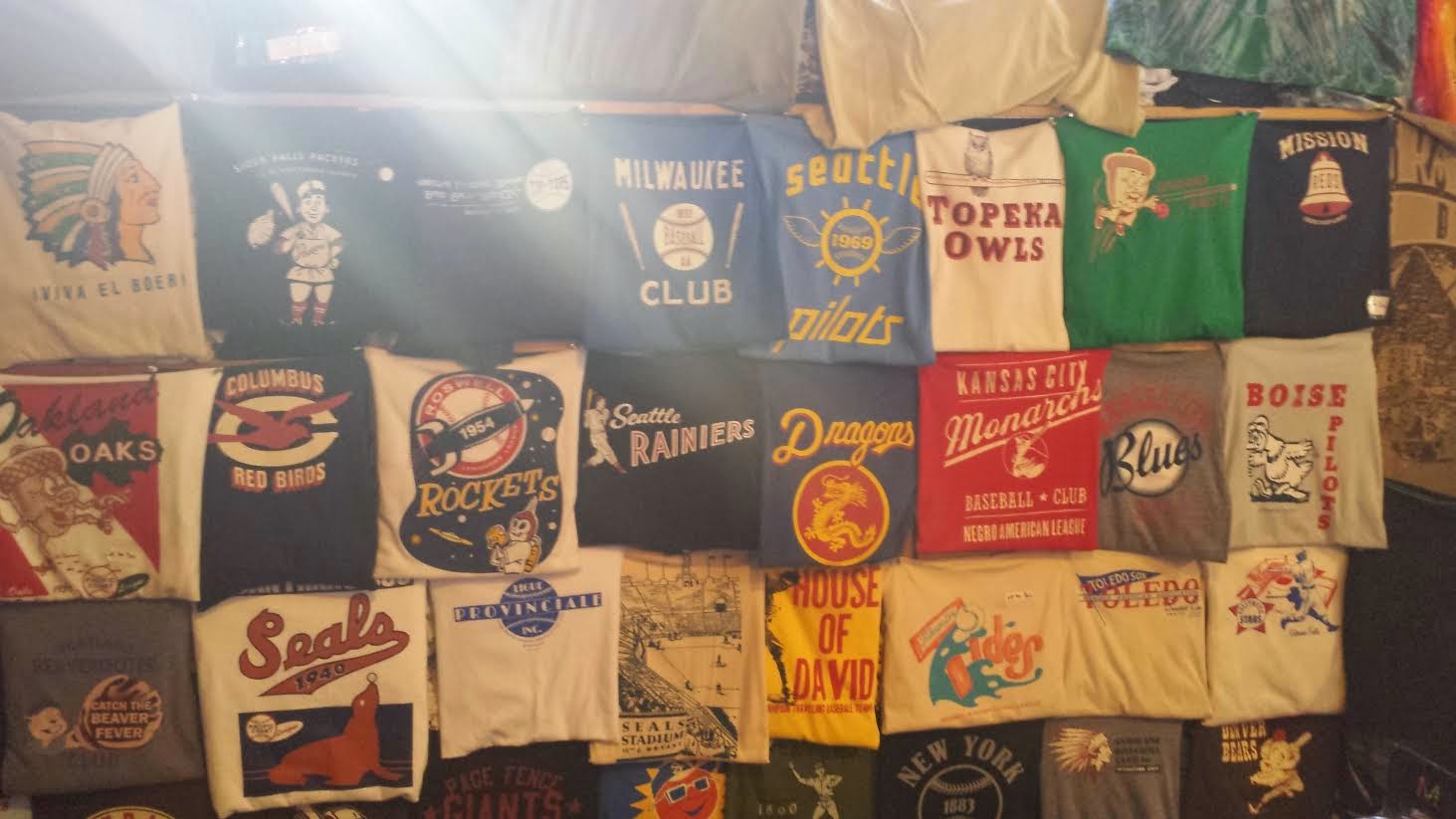 The best weekend of the year, the birthday weekend, when Satch can gurantee that he will be out and no one, beast nor man can stop him.

But I digress.  We had 22 solid players show up and everyone made a contribution.  On paper, the visiting team looked like they would run away with it, but that is what is great about this game, nothing is for certain. Satch was on the mound for the visitors, and Sonny took the bump for one inning for the homers and then gave way to Sean, fresh from a European tour.

I got the lead off out alright, which was Sean.  And then the homers exploded in a series of hits and errors that was eerily like the last time I pitched.  Then did it again the next inning.

By the third inning, after a long drawn out conversation, it was decided it was 6 and not 5-1.

Tony rightly noted that this was definitely one of those 'Is this really happening' games, the weather certainly had been odd, it was an offshore breeze, which blew pop ups in the complete opposite direction that we are used to them going.  The air was humid, hot and chilly all at once.

We finally started getting some breaks, and Coney Island James was on a tear all day, at least 2-3 big flies to deep left field, one that cleared the bases.  All of a sudden we were right back in it.  By the 6th it was 8-6.  Then 10-6.

James asked to pitch, then gave me another inning to celebrate my birthday, and after a shutdown inning, we kept bringing the heat and scoring, eventually with the tying and the go ahead runs. 11-10.  So, when I bowed out at 7 innings, I still got to be the pitcher of record (for the record).  James then entered the game, threw 5 warm ups and promptly removed himself and inserted Greg instead.  Hopefully the elbow issue is not serious.

Sean gave way to Mitch, who seems is most vulnerable to the problem that he can't play defense for himself.  Certainly seemed to be the case, as a number of hits went to the outfield, which would have been routine flies for him, were extra base hits for us.

The see-saw battle continued, and the visitors finally tied it up and then went ahead for the first time in the game.  The homers roared back to within one, but were unable to close the gap.  We had played such a quick game that by the end of 9 it was only 3:15, so we played two extra, with Daniel coming in for the visitors and Sonny reentering for the homers.  The game slowed and the cold started to move in.  We called it after the 11th and everyone went home having enjoyed a great day of ball.

* James was a masher all day

* Jimmy made an amazing defensive play

* John Mcgrath had at least 3-4 hits, including a long gapper

* Tony hurt himself running in after an inning, classic Rojas....

* Tim caught all 11 for the homers, impressive!

* Duane and Jimmy caught for the visitors, Duane and I worked well once he got used to the catchers view of Satch's pitches

* Dennis showed up out of the blue, talked his usual game, departed before the end.  He did give me an epic 12 pitch at bat and I did throw a knuckleball behind him.

* I had at least one inning where Don made all the outs in center.  A few innings later the homers hit a bunch out there, and he wasn't there anymore....dang!

* In one of the above mentioned hits, Elvin was playing about 12 feet behind second base in center.  Not ideally placed for a center fielder.  ELVIN!

* JT has a theory that the last out of the World Series is part of a un-codified Giants play manual dating back fifty years.  It takes a while to explain it, so settle in.

*  Tyse was victim to the changeup all day

* First two at bats, I hit two come-backers up the middle, Sean snared the first one some how and Dennis collapsed on the second one and threw me out.

* The homers turned a beautiful double play, to stymie a rally

* Sean seemed to have not lost his stroke in Europe

* Example of Visitors Defensive Acumen- A hit to right went past the right fielder, bobbled by the center fielder, thrown offline past the cutoff, through the second basemen at the base and then was bobbled by the pitcher picking it up.

* Daniel was rocking the bandana neckerchief all game.  Bold fashion.

What a day for a ball game, and I am not just saying that because I actually got to play or because it was amazing out or that we had 20 guys show up or that...well, maybe it was all those things but it was more too.

The field was in great shape, the mound was exquisite.  Greg started for the homers and Satch went for the visitors.  The day opened with a couple of runs, and then a couple answered back and we thought we were into a real see-saw game.  It was a nice thought.

The early innings saw the score tied at 4's, and then we went ahead, and they went ahead and then, well the wheels came off.  The homers realized the true potential of their line up and started tearing us to shreds.  Then we started tearing ourselves to shreds, and that didn't help things.

There were a couple of 5-6 out innings, but mostly, the homers were just knocking the cover off the ball.  I think there were at least 7 hits to the left center gap along with several line drives up the middle.  I felt a little sore from lack of use, but I was making my pitches for the most part.; they were hitting strikes.

Some may have thought the homers had a loaded line up, you be the judge: Rojas, Powell, Adam, Greg, Coney Island James, Nero, Tim, Phelps, Mitch, and New Guy Ryan.  Not a lot of hopes for easy outs in any of those batters.

Greg bowed to Brian Phelps after 6, and then Mitch came into close the door for the 8th and 9th.  Satch stayed into absorb the complete game loss, with a final score of 12-7?

* James hit a home run that I tracked with the ol' Google maps, ~415 feet...see below.... impressive....we were all telling him to slow down as he trucked around the bases, and then he stopped and walked back to third, confused as to why he was being held up.  Once it was all cleared up, he trotted home as he should have.

* I think I had 5 or 6 strike outs, which were well needed

* Tim, Bob and Jimmy did the catching, thanks to all

* Everyone who didn't slide was treated to the chorus, "SLIDE ELVIN!"

* Apologies to Ryan for the broken bat

* One of the quickest games we have ever had, considering the score.  Started around 1:20 and we were done before 4:00.

* Nick made a nice unassisted double play when we really needed it.

* The visitors first three hits were to right field

* The entire home team pitching trio did a great job of not allowing any real well struck balls, I can say for myself that I popped out/grounded out four times

* Bob was hit in the spine, looked like it hurt

* I hit Ryan with an wild curve, in the ass, best place for it

* Sorry to hear that last week only 10 people showed up, come on MBC we can do better than that.

* Jersey Joe made a great running catch in center

* The East coast was well represented

* The shadow of the tree in right made throws to first base a challenge all day.  Kudos to Lattig and Adam for the plays they made

See you all real soon.