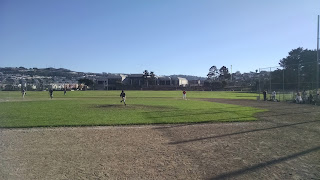 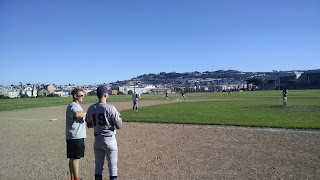 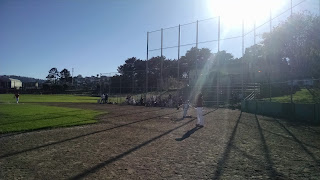 What could have been a really horrible day, turned into a great one.  I sent out an email last week, apologizing to the group about my lack of attendance, due to various family and work obligations.  This week, the madness finally ebbing, I was able to get out again.  So I sent out another email, pleading for good attendance, since the weather was amazing, over 90 degrees in SF rarely happens!

I got out there nice and early, Mitch showed up soon after, and a slow trickle of players followed.  At 3pm we had exactly 10 players.  ARGHHHH!!!!!  I do not understand how it is that we can have 70 active people on an email list and not get a full game?  As we trudged through infield/outfield, we kept noticing that there was a convolution of young players with lots of gear and uniforms at our field.  Was there a permit snafu, or was this divine providence?  The latter it seemed, they were a traveling team of high-schoolers from SF--coached by the University High coaches-- gearing up for a tournament in AZ.  Can everyone say scrimmage?

So we started, us the homers, the 25 odd kids and five coaches on the other side.  Satch started, and threw 5 innings.  Only gave up 2 runs, which makes me happy, given that it was a bunch of whipper snappers in the prime of their athletic life.  Unfortunately, their starting pitcher (who we learned later was actually a red-shirt college player) struck out our first 7 guys in a row.  Not exactly the look we were going for.  But in the third inning, Nick got on, James tattooed a ball to left (their outfielders played us like we were a t-ball team) and Satch hit a opposite field grounder past second, and we had two runs.  They got back one, and then we exploded for another two runs, after a pitching change made us all a little more confident.

Satch bowed out, having struck out about 7 and hit one kid in the chest while he tried to bunt.  i won't say that was intentional, but I was trying to make it hard for him to bunt.  I thought the rule was, you try to bunt a ball, and it hits you, it counts as a strike.  Apparently not, but he did push at it, not just hold the bat out, so I feel it should have been strike.  Whatever, the score 4-2 in our favor, as I left, helped by Mitch doing what Mitch does, robbing a deep drive to right field, seriously, he was playing the guy at about 415 feet, and he just waited for it.

Sean came it, and well, the change in pitching seemed to help the other team as well.  They had several powerful line drives, and when the dust had settled, it was 5-4, them.  In hindsight, Sean probably did it on purpose to give himself a chance at the win.  He's crafty like that.

At first, that strategy worked, as we went up 6-5, but then the youth and keen eyesight of the young un's took over, but our hitting went cold, a hard throwing kid came in and made us nervous, and after Jessie pitched a frustrating 8th inning, where we had a blown opportunity at a home to first double play, the final score was 10-6.  We stopped after 8 innings, since it was after 6 pm, and due to the fact that the other team took soooo long to get in the box and then in between pitches, stepping out, looking for signs, etc.

But at least we had a game!

* That young kid got Mitched.

* We held our own against a high school all star team

* Derrick had a nice hit, and made a crucial catch in the sun drenched left field

* Bob caught 6, after having played in a earlier game with JT and Dennis

* John McGrath successfully argued a 3rd strike call that the catcher made with a simple, "Fuck no." The kid was shaken.

* I was really surprised that they didn't bunt more, with their speed we would have had trouble.

* Duane made a fantastic catch on a high line drive

* We almost had a double play on a 1-6-3 dribbler, Chris made a nice play on the turn

* Bob was not HBP, we were surprised.

* He did however loaf it down to 1st on a ground ball that the SS muffed.  If he had been running full out...it would have been a closer play.....

* About 5 times, after getting a base hit off me, I said Nice Hit.  Each time I was ignored or met with a blank stare.  These kids were still in the mindset that one does not give or take compliments from the other side....

* James had the hit of the game, a triple

* Derrick brought the gear, but forgot the helmets, so we were swapping constantly from the base paths. I also got a chance to wear a helmet sized for 5 3/4 to 6 7/8

Thanks for a memorable game!