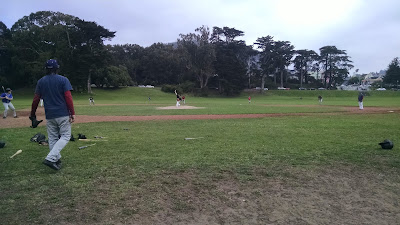 Another paltry showing, and other game where I proved to be #14, and yet, this game was actually a lot of fun, lots of twists and turns.  We ended up with 15, after a park father recruited us his son, Azaan, who plays for the Mission HS team.  Needless to say, he was a lot better than all of us.  Here is his MaxPreps line


Nick W. was on the hill for the homers, and Chris Powell started for the visitors, and both did well through about 4 innings.  Chris had an issue with the first three batters that faced him, they all hit the ball really hard, especially Nate, who set the day's tone for long drives to left field.  But Chris settled down after that.  Nick had his good curveball working and was pretty, pretty, pretty good.

We have had some see-saw battles in our time, but this was a real SEE-SAW battle.  Like every inning, there was one run scored, and the lead would change hands.  pretty exciting stuff, especially since the last game I played in was such a lop-sided snoozefest.

There weren't any particular amazing defensive plays, one thing that we all noted was that when Powell is pitching, that is a big sacrifice you make defensively, same with Mitch.  Powell noticed it too....

We had a lot of pitchers get work, I threw 2, Azaan threw two (at what he claimed was 60%, which was still really good) Chris L threw one, though his effectively wild almost became just wild.  On the other team, Mike and Abe tried to hold the line, but the visitors finally broke out of the tit-for-tat offense, and by the time the 9th inning rolled around, the score was 10-5.  They scored two to close the gap but that was all they got.

* A much more enjoyable game, even though the sun didn't show up again

* There was a yuuuuge crowd for the olde tyme game, it was a all-start thing or something, but they had hot-dog vendors, and press, and we saw Dave, who ditched us in favor of the old guys.

* Don returned, hit one of the deeeeep left bombs, did his thing

* John McG was in the mix, now back to complete right handedness

* Elvin's insistence on playing first base, so that our team had to fill in right and center field was pretty aggregious.  When queried on this, his response was " I don't give a fuck what you guys think." Clearly, Elvin, clearly.

* Nate, Don, me, Azaan, and Chris all hit baseballs almost to the hill in left.  Average distance:


* Man, is it nice to have a first baseman that can make the scoops, welcome back Adam P!

* While pitching, a ball was hit wayyyy up in the air in between catcher and third.  I instantly declared, " NOT ME!", which yes, is a little unorthodox.  It also appeared that it was not Don or Chris L. as it dropped between them.  Hey, I took myself out of the play early on, for the first time my laziness has given me an alibi

* For not feeling all that great, I had two doubles and 4 RBIs.

* Unbelievably, Powell dropped a pop fly to SS, that is his bread and butter!

* The homers may have been cheated out of a line drive down the third base line that was actually a fair ball.

* Urano did his best to carry his team, he was doing it all with the bat and glove

* Nick S. was the team dad for the game, thank you for taking the gear, and being the organized one

* Don made a nice running play on a bloop to left

*  There was an excellent relay to get a guy at 2nd, that is why we take the time to make good throws

* Mike pitched well for a guy who was in the hospital not long ago with busted ribs and a punctured lung....

Thanks again for everyone who showed up, get well soon all those who are out on the DL.