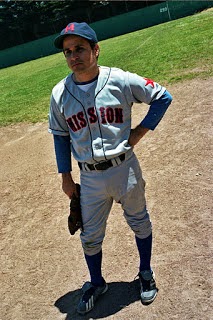 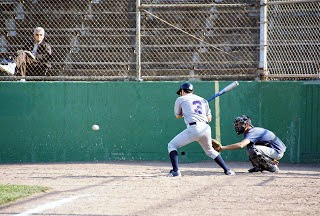 Richie constitutes the last of the regular old timers that has not yet been highlighted.  I think part of the delay was that Richie seems to stay on the fringe of the MBC these days, due to work, various skateboarding/soccer injuries and ???.  But when I started playing, he was a every Sunday kind of guy.  And to his credit, whenever he does show up these days it is apparent that his skills have not deteriorated one iota.

Richie is the prototypical leadoff hitter, and you can tell that he has always been so.  For starters he is very patient at the plate.  VERY PATIENT.  Some might say overly.  But that is just the pitcher in me talking. And his strike zone is about the smallest of anyone that plays in our league, I don't know how tall he is, but if he's more than 5'5", I would be very surprised.  Compact, I am sure is how he would describe it.  He's all lean and muscle though, and he can move down the line so he is always a bunt/steal threat.

I realized about 8 years ago that I was really stressing myself out too much trying to pitch Richie perfectly.  It's never a good thing to start out a game all frazzled 'cuz the lead off guy is not swinging at your nibbles.  So I decided then and there that I would let the odds and gods take care of it for me.  As we all know, the best hitters fail 70% of the time, so my approach now with Richie is to feed him strikes and hope he doesn't get into anything too fully.  He is decent enough to compliment the good pitches I get by him, as well.

So I can vouch for not always trying to get a guy out, seems to work, as long as you don't mind said guy hitting .500 off you....fine by me.  So Richie gets on base a lot.  He will steal a base whenever he wants to, he was taught to be aggressive on the paths.  His father and former coach came out once and watched us.  Well, he sat and read a book and occasionally paid attention to us.  I don't think he was completely impressed with our skills....

Richie was a catcher for a long while, but then had some sort of multiple concussion incident (skate or die) and hasn't caught since I don't think. 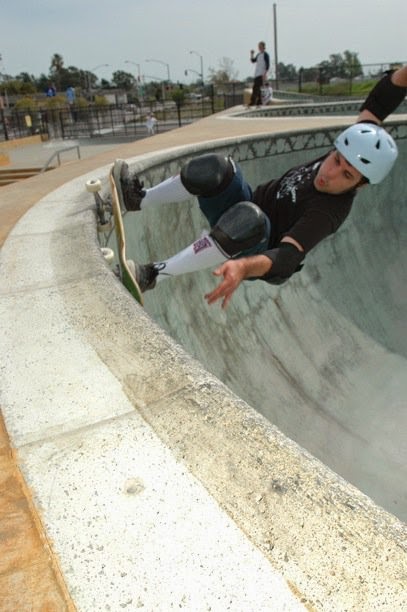 He can play every position, and play it well.  I think I have even seen him pitch, but that may have been an anomaly.  But he has great hands, and baseball instincts.

Interesting side-note: The first time Richie went to SQ, he got more prison respect than the rest of us.  Being Latino, they gave him the O.G. nods during the handshaking.  Maybe they were just sad that a team hailing from the Mission district of SF was full of goofy white guys.  And maybe they were right.

Richie was also the unfortunate victim of the closest I have ever come in MBC to really hurting someone.  I threw a high and tight fastball (unintentionally) that went straight for Richie's face.  He leaned back enough that it only skimmed his forearm and hand, and then flat to the ground.  For a second I thought I had really hurt him, luckily he was alright, but the shock knocked him out of the game.  I felt pretty sick the rest of the day, thinking about how much worse it could have been.  I don't think he holds a grudge, but he would be right to if he did.

Richie is one of the more level headed, decent people I have ever met, a thing that I take for granted less and less as I grow older.  Pleasant, cheerful, wry, and knows the game in and out.  He is also a drummer, and a good one by all accounts.  I also found out that he went to UC Santa Cruz with a friend of mine, she is blonde and 6'3"...they must have been an awesome looking crew, especially if he was still rocking this look....is that the lead singer from Mr. Big?

The only bad thing I have to say about Richie is he loves the wrong baseball team.  Between him, LAttig (that's an intentional typo by the way, think about it) and Nero, they form the triumvirate of Dodger Faithful within the MBC.   The good news is that he is also an Oakland A's fan....so I guess that balances out.

So Richie, I apologize you weren't highlighted sooner, but hopefully this will serve to remind you that baseball is better than soccer and whatever else you find yourself doing on Sundays instead of playing the best game ever invented.

We of the MBC salute you!

I realized there have been a number of veterans that I have not reviewed, for which I apologize.  Much like Doc's write up, this one is from the way back times of the MBC.

In fact, Brian Cagle is one of the original 17 Reasons guys (you can see him in the picture I posted recently, although he appears to be about 8 inches taller than is is).  I don't know that he was in any bands, which would make him the oddity in the first squad, but maybe he was the manager or something....I know he is a math teacher, which makes him a genius in my book.

Cagle is a quiet, reserved kind of fellow, but he plays with a degree of intensity that one might be surprised to find in such a taciturn person.  I think part of it is his sense of humor which is rather sarcastic and barbed, but presented so calmly that it flies over a lot of heads.  Having heard stories over the years, it sounds like Brian is not one to be trifled with, but mostly he has struck me as always pleasant and all-weathered.  But, I have seen him when he gets a little aggravated and it is surprising how acidic he can be.

Brian is what you want in a middle infielder, good hands, quick reflexes, and steady with the bat.  What Brian really has is one of the finest abilities to bunt that I have witnessed since I have been playing. He's like a surgeon out there, and you never know when but you always know it will be in the hardest possible place to reach.

It is a shame that we don't see him much anymore, there was a good run for a few years when he could be counted on each week.  My jealousy runs high in fashion as well, being on the smaller side, Cagle also had the added bonus of being able to fit in to all number of vintage woolen jersey's that us behemoths would kill for a chance at.

So, a ballplayer who keeps his own counsel, executes when needed, plays solid defense and can be counted on to be fair minded.  Who wouldn't want that as part of their team?

Thanks Brian, hope we see you again soon!


This just in from the opposite field hitting surgeon, Mike Gaspar.  I wish I could have been there, but hopefully weekends will be a little easier now that we are out of wedding season.

It wasn't nice, it wasn't decent.  It was downright hot at Balboa Park on Sunday.

If nothing else, Fleet Week seems to bring some great weather with it.  Per Bob's advice we all arrived a little early.  But as it turned out there were only 13 of us regulars.  Luckily, there were a couple of guys practicing their bunting and playing pepper at the field and they were more than happy to join us.

Greg took the mound for the home team and was immediately greeted with a line drive single off the bat of John Mac.  A couple of hits later it was 2-0.  Then came the big hit,  a three run homer from the visitors pitcher Mitch.  And the hits just kept coming.  It was eight or nine to nothing before the homers even came to bat.

Mitch, given the big lead, was aggressive with the fast ball and mixed in just enough curves to keep the homers off balance.  And with the combination of at ‘em balls and just plain good defense the homers were kept off the board until late in the game.  Mitch gave way to yours truly in the eighth (a sure sign the game is out of hand) and Hank pitched the ninth.

Greg went the distance for the homers.  And to be fair, his defense let him down a bit.  Their center fielder, Rufino, was very reluctant to catch balls in the air.  Preferred to let them bounce once or twice.