Another real barn burner of a game, we had exactly 18 players, and everyone gave it their all, I must say. While I was on the losing side of the diamond, it was exciting to be a part of this game, and that is sometimes better than winning (although James might disagree).

Blustery day, but with pockets of sun here and there, but definitely July sleeves weather in SF. Satch and Sean squared off again in a classic match up, Sean was fresh from a limited session last week, and man did he dominate. We couldn't seem to string two hits together and while the defense was a little screwy now and then, he pitched his way out of some good jams. Estimates of Satch's pitching performance put the K's at around 10-12 for the day, which felt good, the problem was that every ground ball I got, seemed to take the worlds worst hop before it reached the infielder. A tailor made double play ricocheted into the outfield, Edwin's easy hopper suddenly gained 20 mph and bounced off his shin. This is no to say that the visitors didn't do their share of hitting, having Richie, Lattig, Mitch and Sean to face in a row was less than pleasant.
We homers scored first, with a frozen Adam Pfhaler getting a second chance after neglecting to go home on a ground ball, but the visitors promptly took back the lead and and we see-sawed for a few innings, tied it all up in the 4th, then the visitors took the lead, 5-4 and never looked back.
The score stood 9-4 for a few innings, and we started to get despondent, but a hit, an important walk by Satch (hey there's nothing that says we can't take a walk if we want to....) and some errors by the visitors, and we were right back in the game, by the top of the 9th, it was 9-8, and we were positioned for a great comeback. But, instead we choked and went down meekly 1,2,3, Satch providing the final out with a squibber up the 1st base line. Sean had his victory, well earned. James had another loss, and a new haircut, Satch had 9 innings of work and a blister.

But, hey, where else would any of us want to be?

* The powerhouse of the visitors provided some big doubles and triples

* Ben was the trickster of the day, I got him 0-2 twice, and then he managed line drives to right, got to find a new out pitch

* Gaspar and Adam both had epic battles with Sean, and unfortunately Sean won both times

* Double plays for the visitors!

* For every bad hop we had, the other got the cleanest ground balls....

* More foul balls when people are stealing, swinging while there is a runner is a practice that works when we are 9 years old or MLB, but not in between.

* Gaspar also beat out a close play at 1st, then came around the paths to slide into home on another close play and just barely got under the

* Tony had the biggest hit of the game for us, actually coming through with extra bases and men on
* No win for James, but karmically he has to be doing pretty good having donated 2 years worth of hair growth to the Lock of Love organization. And now he doesn't have to look like a dirty hippy anymore too!

* Curve ball is working again, and I threw a sidearm ball, since I didn't want to feel left out. And a submarine knuckleball which is just silly.

Final SQ game coming up, but for now, same place same time
S. Paige
PS
Here is a couple of photos of the our local bon vivant, Johnny Bartlett, educating the Paris frogs on what the MBC is all about. Send me pictures you have of your MBC pride, and I'll post 'em! 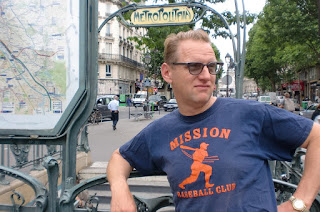 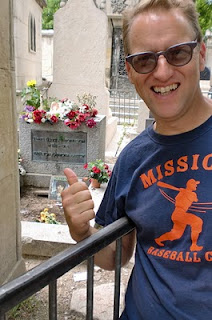 Boy was it lovely to be back, it was everything I had been dreaming about for the last two weeks. It hurt not to be able to be there for the fourth of July double header (I will write it up once all you suck asses start responding to my email about your favorite highlight of the day).

In any case, we started with 13, then all of sudden we had 20 guys and a great game ahead. Satch was aching to get on the bump and as soon as we had enough, I raced to the mound and Greg was suited up and ready to serve behind the dish. Sean was taking it easy, Johnny started in his stead, and we built up what we thought was an insurmountable lead in the first 2 innings. But such is the nature of Johnny's attack, and through the game as we started to flail again and again at his tailing fastball, the visitors chipped slowly and steadily away at our lead. 4-0, and 5-1 suddenly was 5-3 and then 4 and by the 7th inning it was tied at 5.

Satch left the game with the score still tied and Greg came in to pitch for the homers. Luckily his guile was working and his defense was at its trickiest, cuz his pitches just weren't working. Tony used a great hidden ball trick to get Sean out at third after a lead off triple, and Greg picked off a new guy at first to get the second out.

The 8th saw the homers take the lead with what looked to be a sure third out, but true MBC baseball is the stuff of slow rollers, shoddy fielding and lucky baserunning, and by the 9th we had a three run lead. We agreed to an extra just to celebrate a great day, but the visitors were handcuffed once more and the final was 8-5. Damn, it felt good to be home.

* A couple of excellent battles at the plate, one especially from Mike Gaspar that went on about 10 minutes

* Sean's hit off my knuckleball was seriously a infield fly, until it was in the wind and somehow in the left field gap.

* Tony and I had the same game, we were on base a couple of times, sometimes when we didn't deserve it, and we both struck out

* The new guys caught, hit, threw and ran like old pros, come on out again

* In the same vein, Girgus is proposing that whenever we get a new guy out there, we get him to fill out a info card with a contact number, and that way if he never shows up again, we can reserve the right to call him and ask why he is being an asshole and leaving us on a beautiful day with 13 players....hypothetically

* Sean has a new sidearm pitch that tails away from rightys, just to warn you

* The game seemed to favor the visitors in the 8th, with runners on 1st and third and two outs, Ben hit a single but failed to hustle down the line and was thrown out at 1st to save the tie. You gotta run everything out, all the time, San Quentin taught us that.

* Mitch cut his hair, caught a couple of run saving short flies and hit a monster into the gap.

* John Nero got the Bob treatment in the middle of the back, it was a changeup so I don't feel too bad, mainly I just miss Bob....

* James' MBC record now stands at 1-10, he managed to be on the losing team for both sides of the double header, so if yo ufind yourself on his team, make sure you try your hardest, he needs a win

* Adam and Sean both played an excellent keystone sack, with some great stretches, digs and foul ball catches

Same place, same time, lord loves a working man, don't trust whitey, see a doctor and get rid of it. 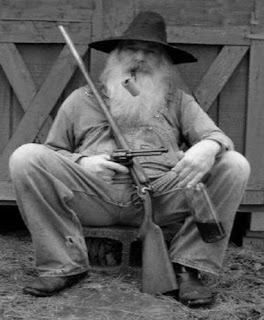 In my absence I am posting this picture which pretty much shows how we won the war for independence and why freedom is such an important thing...

Have a great one!