It wasn't the worst blow out in MBC history, but it was close and we didn't even finish the game.  Going into it, I thought our home team was stacked, we had veterans, we had power....we had bupkis as it turns out.  The other team routed us pretty much from start to finish, and it was never a close game, that I can recall.

Greg started for the homers, and wasn't doing anything different, but the hits-- which started with a lead off triple over me and lil' Satch's head-- just kept on coming.  We couldn't guard against the well-placed ball.  We didn't do great with the balls that we did get close to, but not overly so.  Mostly it was just a lot of hits.

Noah started, three weeks after the birth of his first son, and did just what he always does, and effectively.  When it became a laugher, he gave the ball up to Gaston, not exactly giving us a chance.  Sonny took over for Greg, but the visitors kept doing what they had been doing.

Round about 4:45, some teenagers and a coach looking guy showed up and said they had the field.  We showed him our permit and he said he had one for 5, not on him of course.  We told him that until he produced the document, we were going to keep playing.  Eventually, after being a dick about it, he got some sort of official looking email and that was that.  Greg acquiesced the field, but only after restating that if the guy could have handled the situation better and why we did what we did ( I am cleaning up the language).  So we got 8 innings in.

* Storm and Rich both banged off the right field wall a few times, one of which caught me right in the solar plexus on the ricochet

* Josh had a good day at the plate

* We did get a double play when it was sorely needed

* Someone was almost thrown out at first from left field

* We had three consecutive seeing eye ground balls off of Gaston

* Its easier to try and name all the people on the visiting team, rather than remember who got hits, so Josh, Rich, Noah, John Mcg, Storm, Elvin, Gaston, Mitch, Daniel, good hitting. 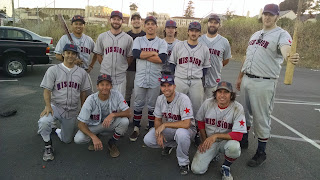 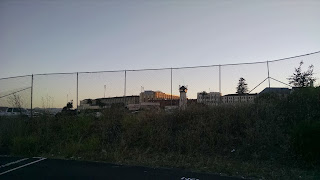 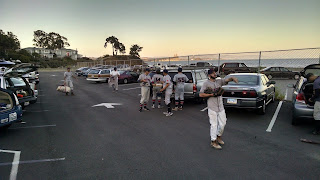 We needed a rematch, after the crushing defeat we suffered at the last game.  And while technically not a win, we managed to comport ourselves with dignity and grace, and walk out with our heads high.

We got in remarkably quick, and the game started on the parched dry field.  In unusual style, we scored three runs in the first inning, with Coney Island James torching a double to put up a crooked number.  Of course, our lead was short lived, and by the end of the 1st, it was tied at 3.

Sean started for us, and had a rough first inning, but settled down after that, and only allowed 2 more runs over four innings, with 6 K's!  He struck out the side in the first, which gives you an idea of our ineptitude to get an out at the beginning of the game.  Our team had a serious case of the dropsies the entire game, I think we would have walked away with the win, if we had managed to squeeze the ball.  Oh well, what can you do?

In the 5th, Satch came in and had the same first inning that Sean had expereinced, and by the end of it, the score had gone up to 8-4.  By professional standards, a long margin, by MBC standards, no problem.  We chipped away, and with a very quick 6th inning, helped by a great doubling off play, we ran the score back to tied in the top of the seventh.  More importantly, we managed to get to a 7th inning in a mid-week game!

Gaston came in to preserve the tie, and had to do it his own way, by walking the bases loaded before getting the third out, on a line drive to 1st, that of course was dropped, but thankfully picked up and the out and the tie were in the books.

* Chris played a great SS and scored a run

* James was the hit machine, and beleaguered left fielder, watching the ball rattle around the yard fences

*  Gaston made a great pickoff and it turned into a rundown play, where the entire team began to converge on the pickle

* Greg continued to hit with confidence....but only when at SQ

* In the picture, the point of holding that bat is that the team wouldn't let me bring in one of my bats. To which I claimed that chances were very high that I would break a bat.  And I did.  Can't say I didn't warn ya.  I had threatened to break Elvin's bat since he mouthed off about my bats, but chose the high road.  Contrary to popular opinion, I did not break the bat purposefully.  I am not a sicko, just a freak.

* Gaston decided his prison nickname should be Shotgun.  Then he picked some kumquats off of a tree in the SQ parking lot.  I suggested that Prison Fruit might be a better nickname.  Which one do you think the team decided on?

* Gaston also made new friends immediately by hanging out in the shade of the right field fence, yakking it up with the fans.

* Elvin got the tying run RBI (by taking a pitch and then letting the catcher throw it away), Ed gets the assist for stealing 2nd and inducing.

* Ed and Elvin both made some great plays at 2nd

* Backing up and hustling actually made a difference in the game.

* Sean appears to be selling hot dogs in the team photo.  Classy move.

Satch wasn't there, since I was catching these fish. 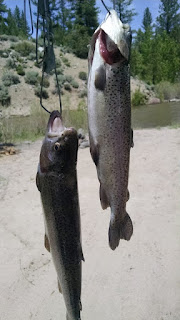 But apparently, there was a good game, or at least a good double play and Sean's usual dominance.  Thanks to Mitch "Grouchy" Burnham for the bringing this to the attention of everyone.  Pay note to Abe's admonishment of one junior esquire, for voicing what he did not know for sure....they are a stern bunch in the legal arena....

And can I also say that the MBC is starting to get overrun with lawyers, and yet there is not a single MD or RN in the bunch.  Do medico's not like baseball?  What that means of course, is that if someone gets seriously injured during the course of the game, they won't get any immediate symptomatic treatment, but they can staunch the bleeding with the business cards of the 8 lawyers lined up to represent them in a personal injury lawsuit.  Here's the thread, and then some lawyer jokes to cap it off, all in good fun gentlemen (I use that term loosely).  Thanks everyone, I'll be here all week.

On Jun 2, 2015 5:50 PM, "Mitch Burnham" <
I was just watching a ball game, as I do these days, and witnessed a great turn of two. I couldn't help but remember the two the losers turned in Sunday. I know Abe turned it but can't remember who fielded it and caught it at first. But just wanted it to get its due.

Imma guess adam was at first and josh fielded it.

Adam was at first, I was at short
-Carter

I was the out at second.  Carter is correct.  He was at short.  I tried to get a spike into Abe's leg, but he was too quick.
-John McGrath

2. Q: Why did God invent lawyers?
A: So that real estate agents would have someone to look down on.

3.  Q: What's the difference between a lawyer and a leech?
A: After you die, a leech stops sucking your blood.

4.  Lawyers occasionally stumble over the truth, but most of them pick themselves up and hurry off as if nothing had happened. - Winston Churchill

5.  A man walks into a bar. He sees a beautiful, well-dressed woman sitting on a bar stool alone. He walks up to her and says, "Hi there, how's it going tonight?"
She turns to him, looks him straight in the eyes and says, "I'll screw anybody any time, any where, any place, it doesn't matter to me."
The guy raises his eyebrows and says, "No kidding? What law firm do you work for?"

6.  An attorney was sitting in his office late one night, when Satan appeared before him. The Devil told the lawyer, "I have a proposition for you. You can win every case you try, for the rest of your life. Your clients will adore you, your colleagues will stand in awe of you, and you will make embarrassing sums of money. All I want in exchange is your soul, your wife's soul, your children's souls, the souls of your parents, grandparents, and parents-in-law, and the souls of all your friends and law partners."
The lawyer thought about this for a moment, then asked, "So, what's the catch?"