It was another hot day in February.  We might as well enjoy it, and come August, when the entire state goes up in flames, we can say, Well, remember how nice it was in February?  The nice weather brought out a lot of players, 25 to be exact, and we started the move to play a group that was practicing on the other diamond to try and have a second squad game, but nothing came of it, so we just settled for a lot of substitutions.

Satch started for the homers, and felt good but was not throwing well.  I didn't get a chance to warm up, and everything was tight and pinched.  I feel like the mound at the newly manicured field in GGP is too steep, and while that should have been an asset, it wasn’t.  Just couldn’t get comfortable.  I threw 4, but the visitors scored about 6 runs, not the best outing.

Carter started for the visitors, and fared better than I, but was not impervious to hits and runs either.  The nature of the game, no one was going to throw a complete game.  Sonny relieved Satch and threw damn near shutout ball for his whole time on the bump, then Sean closed the deal. For the visitors, they had Tony, Dustin, Storm, and Daniel.  So a lot of different hurlers for the day.

Probably the most interesting part of the day was that I think there was about 9-10 people hit by a pitch in the course of the game.  I know I hit four (not my best day, as I said) and was also hit myself, on the knee.  The sound was terrible, but I barely felt it.  Honestly, I thought that the ball was nowhere near hitting my leg. Strange day indeed.

The visitors won handily in 9, we played extras and I think the homers won in 11, but by then, four hours in the hot sun had zapped everyone’s brains, so help me out if this is wrong.

* Great day of ball, fun to have spectators as well

* Hank made a complete lay out to stop a ground ball up the middle.

* Storm had a rip to right that cleared everything

* Jay + Sun = No shirt all day.  We insisted he at least wear one when he batted.

* A lot of almost great plays

* Daniel had a really jarring fall off the grass on the lip of the outfield.  We were surprised he bounced back up

* The infield dirt is the right kind, but it's very deep and soft like sand.

* Thanks to Tim, Ed, Carter, Bob, Greg for catching in the sun

* First spotting of the Jameson twins in quite some time, and no it’s not just a clever name

* I had four hits, all in the exact same direction, between 3rd and SS.

* Elvin claims he likes working counts.  The rest of us call that Get the Goddamn Bat Off Your Shoulder.

* Happy Birthday to the young’un Gaston, 26? 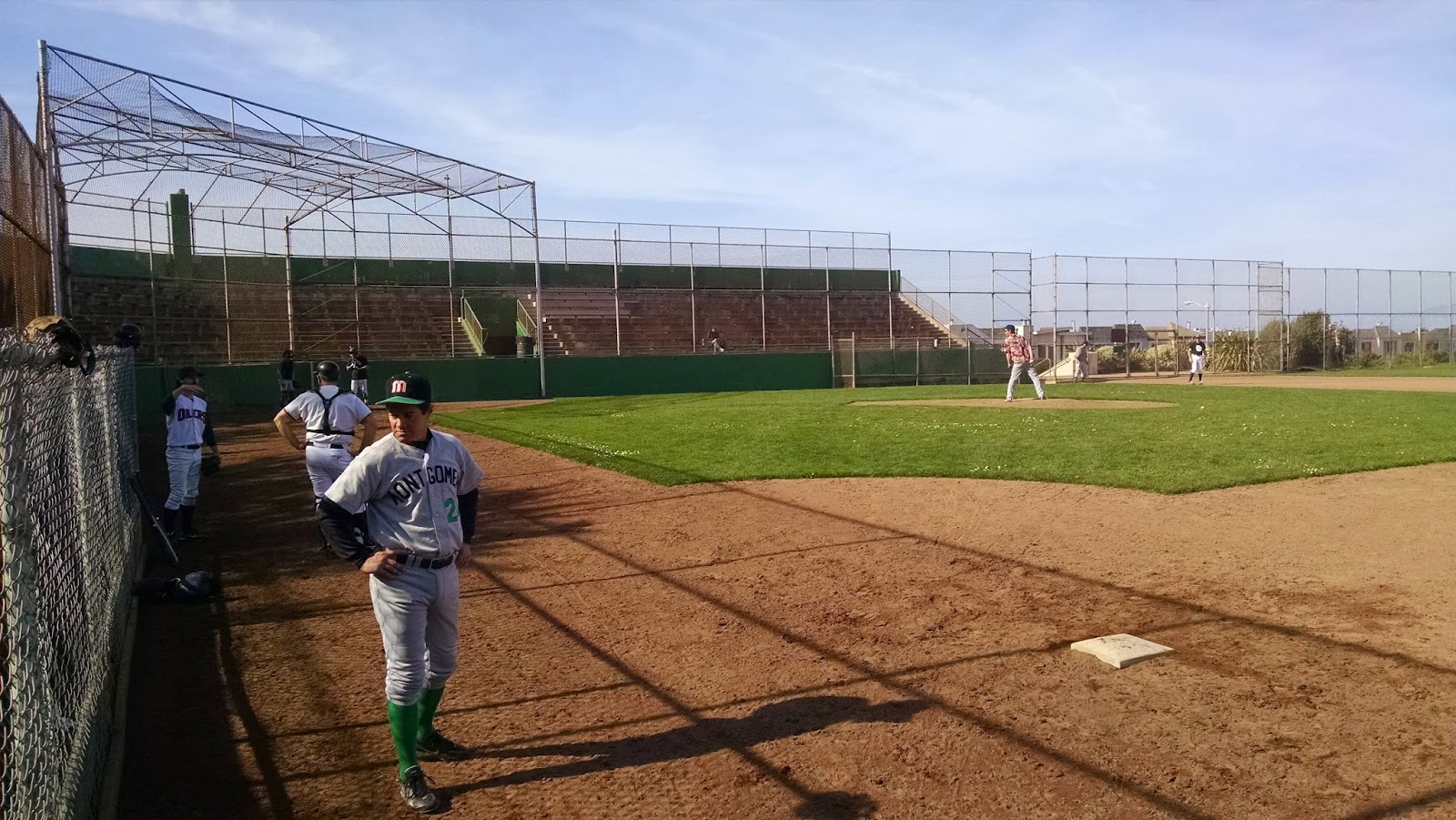 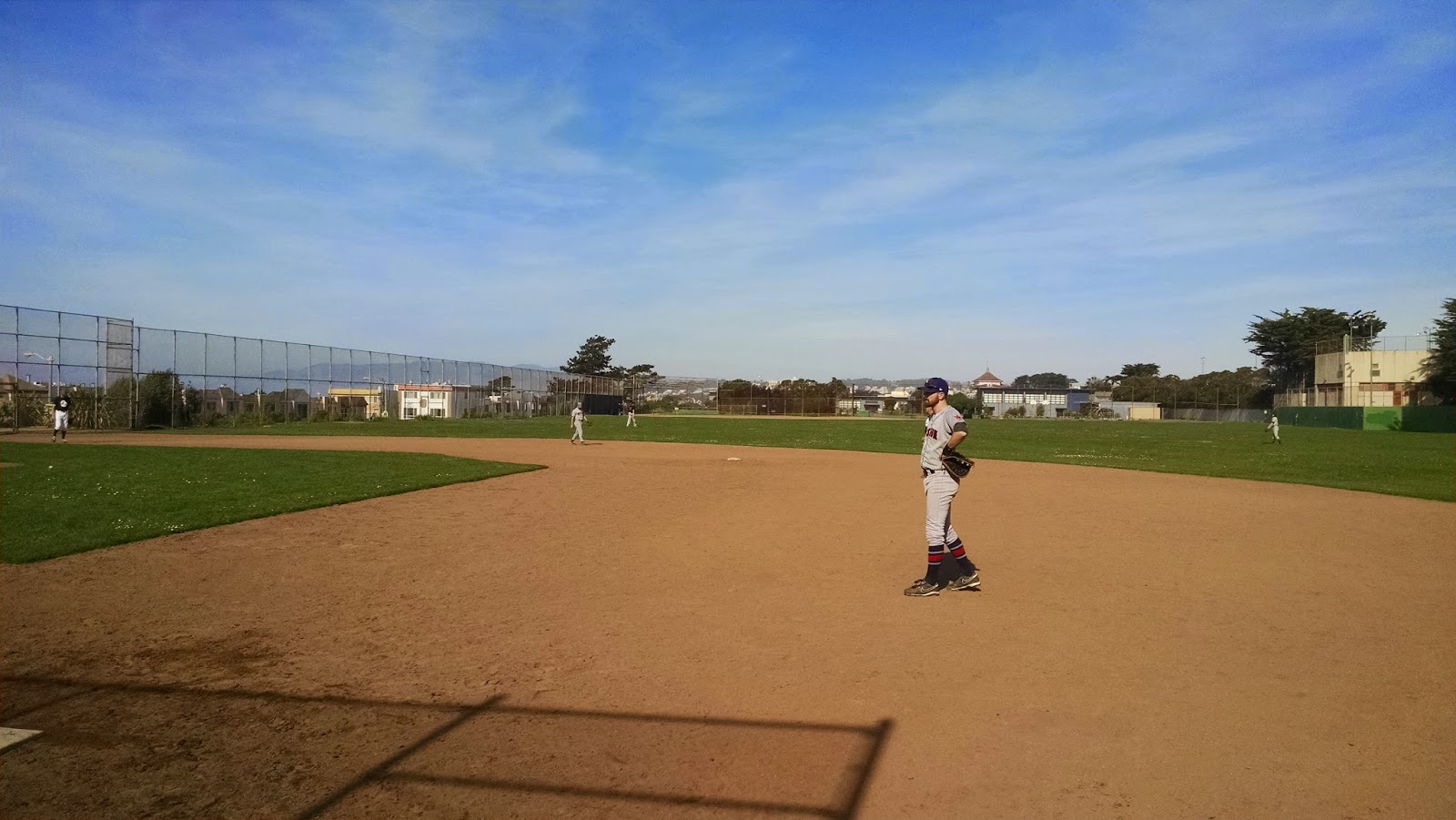 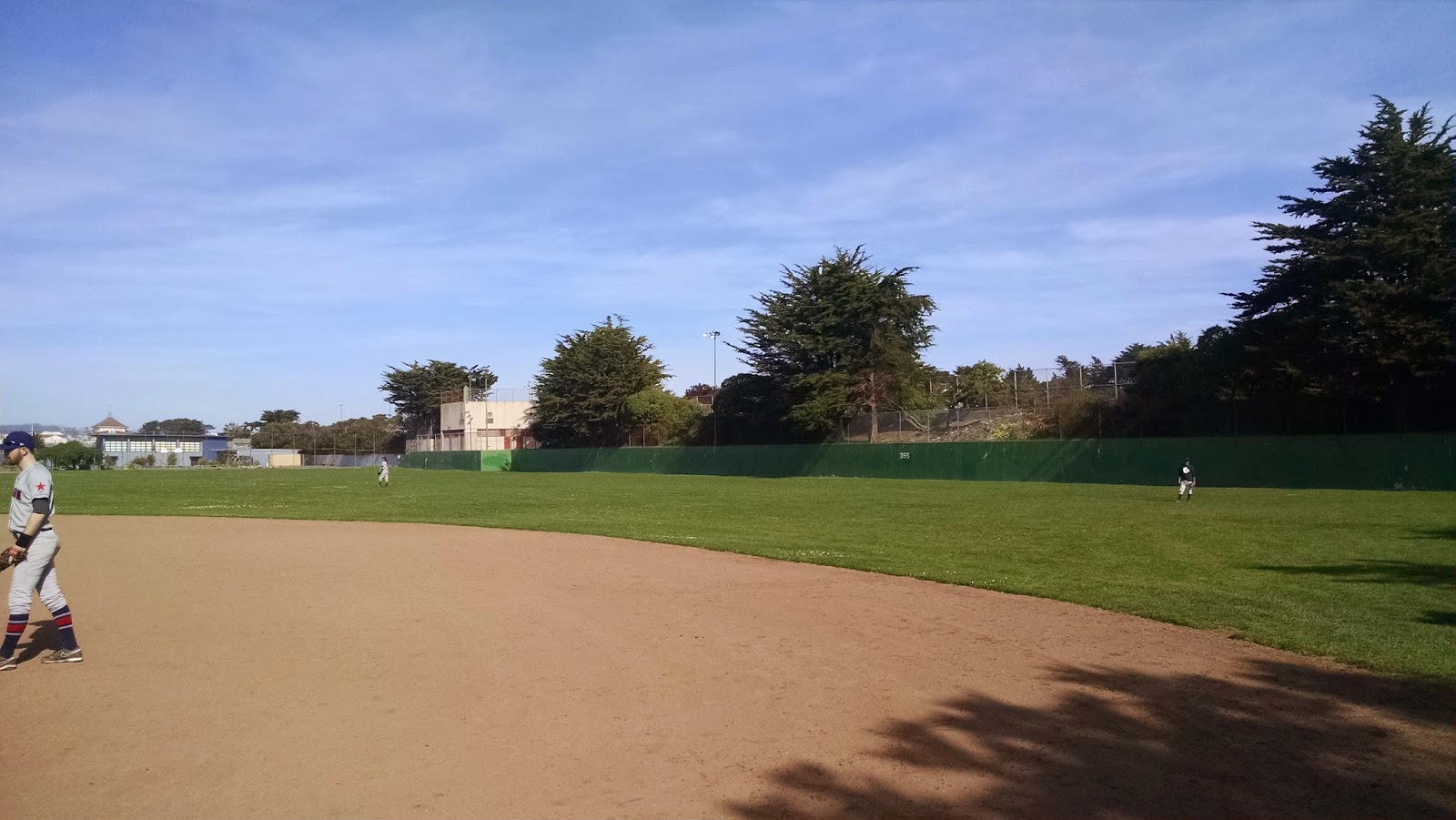 A beautiful day for a ballgame, that is all I can say.  We started a hour early to make time for those that wanted to watch some sort of sporting activity on the television.  Can't say what it was, but apparently, becoming quite popular.  In any case, we were warmed up and ready by noon.

The teams were split up and Sonny started on the bump for the homers.  He lasted three innings and did well, keeping the ball around the strike zone and not letting any one inning get away from him.  He was followed by Chris Powell, who did the same and then a new guy on the front, Storm, who has a live arm to say the least.  I would put him in the mid-high 80's in velocity, which is a lot for our league, and everything with a downward spike.  We batsmen had a little trouble with him, but everyone felt worse for the homer's catcher,  Duane whose toes and shins and other vital appendages were in constant peril from the low skip. After Storm had thrown a few, Daniel came in for the 9th, and did his best, but by then the visitors were a team possessed.

I don't toot my own horn too often, but I have to say that Satch threw a hell of a game.  I could not have done it without some very stellar defense but a complete game, with a shutout through the 7th felt especially fine.  Given that it was almost a month since I had last thrown, the arm was loose and ready to go and the curve ball and the change up were there and useful.  The homers had one of the more formidable line ups that I had seen in a while, with Rich, Chris Powell, Storm, Duane, John McG, just to name a few.  We made sure that we got Mitch to at least negate some of the long ball threat, and that was probably one of the differences in the game.  I threw a lot of off speed stuff, and while some prodigious foul balls were hit, the homers always seemed to be one hit away from a rally and kept stranding the runner (which of course, was Chris Powell, more often than not).

We scored early in the game, and then we were shut down almost as efficiently as the homers were through the middle innings.  3-0 after the second and then 0's for both squads.  The 7th was my crucible, a few timely errors, and the big hit that the homers had been hoping for equated to them taking the lead for the first and only time in the game, by a margin of 5-3.  That served to light a fire under our asses to get back in the scoring game, and we quickly got a bases loaded situation that led us back into the lead in the top of the 9th, and Satch trudged out to save his own start, which he did, to the final of 7-5.

* Everyone who made it out, I salue you as having your priorities straight

* Mitch tracked down several fly balls, but was 0-5, I think, which may be a record.

* I tried to bunt off Powell, and it just rolled foul.  Next time up, he did the same to me, although his was fair....and perfect.  Show off.

* Rich hit a foul ball that hasn't landed yet

* Per tradition, I threw the new guy lots and lots of knuckleballs, which worked well.  I think the mantle of new guy is thrown off the day they stop swinging at all my gimmick pitches

* Handled a hot drive back at my head, and managed to keep my glove on and not cry....

* Don is in a serious slump and Greg wanted everyone to know, maybe shaming him would work.  Nope.  But he did score one of the more important runs in our comeback, so maybe light at the end of the tunnel.

* Hank did well with the bat, and behind the plate, although he got a face full of dirt on a play at home

* Gaspar didn't have a Gaspar hit all day

* JT did the right thing taking a walk when we needed runs, in addition to his hits, fresh back from fantasy camp does good things

* JT also made a very crucial catch in left

* Tony showed up but didn't play, get well soon, and stay off of the goddamn skateboard.