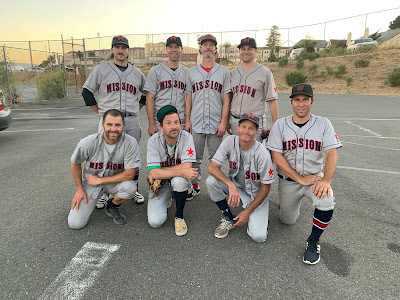 The streak continues, for the A's that is, and our own Brian "Sinister Side" Phelps was there to record the action for the MBC.  We are now 0-3 in 2019 SQ play.  Maybe next game is the one....


The San Quentin A’s secured their 20th victory of the season in a great game vs the Mission Baseball Club. The team met in the parking lot 8 strong with an outsider umpire that was training the inside blue crew.

MBC got out to a quick start with 3 runs in the first with Kool-Aid on the bump for SQ.

But the SQ walls couldn’t contain the A’s and with 3 homers they took the lead 6-3 and held strong.

Highlights (please add if you remember more details)
• MBC pitchers of record were Sean, Mike N, and Phelps.
• Great play in which an error turned thrown out runner at home. Greg made a perfect throw from 1B to Don at catcher
• We played all around great defense especially, from our borrowed RF, Angelo who made a great catch near the tables in triples alley. And threw a runner out from LF to 1B.
• Someone on MBC almost got thrown out at 1B from CF.
• Don caught and didn’t let them run all over us
• The pitchers from both teams made a bunch of plays
• The outfield is in terrible condition and made any play an adventure (word is they are trying to secure funding for a turf field)
• The umpire consultant had some interesting conversations with catchers and batters, such as "nice take… STRIKE!”
Posted by S. Paige at 11:37 AM 2 comments: 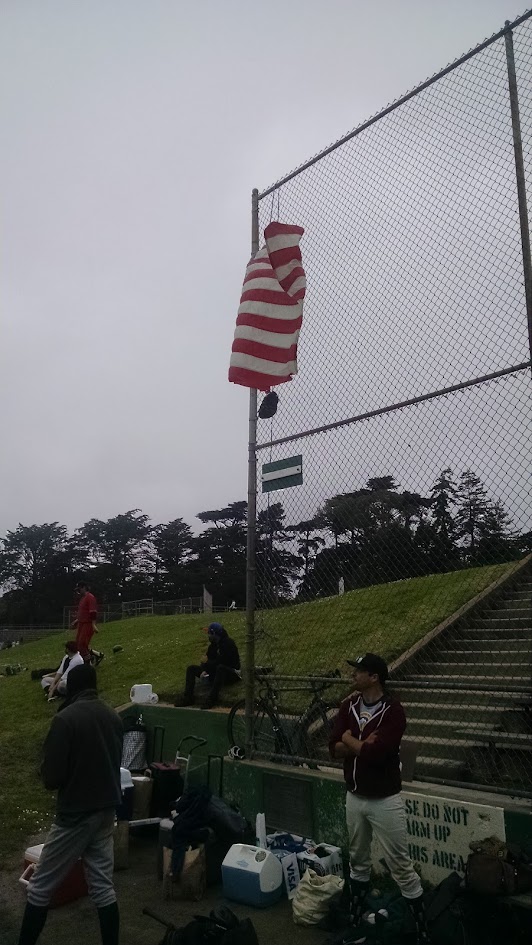 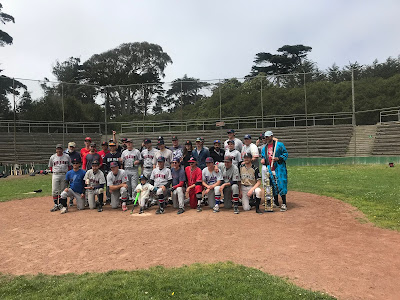 By Bob's count, this is the 17th doubleheader that we have had, meaning that the first was in 2002.  I don't remember if I was in the game yet or not.  I came home in May of 2002, so it is certainly possible.  Bob also reported that the game was at Moscone, but why wouldn't we have had it at the Presidio?  These are all good questions that need answers.

In any case, I mis-read the date on the email this year, and when I realized that, I didn't think that I would be able to make the game, having been in Europe until Saturday the 6th for a family trip.  But we made it back, and I was eager to do something other than sit in a airplane seat, or walk in an airport.  The management and organization of the game this year was a little hap-hazard, but in some ways that was alright too.  Maybe we over-manage the plans to the detriment of the day?  But forks might have been nice too.

This was a real pitcher's duel, or a shitty hitting game, depending on how you want to frame it.  I started for the visitors, and Lattig for the homers.  The first four frames, I threw shutout ball, and Lattig almost the same, the lone run coming on Elvin scoring on a either a passed ball or a sac fly.  But it was 1-0 when I bowed out, we were running at about 14-14 at the time, and I didn't want to take up too much playing time.  Sonny came in after me, and surrendered one run, making it knotted at 1.  HR was the hurler after that, and sad as it is to report, he coughed up the lead and ultimately the game.  Sad that it was only one run, which ordinarily is nothing in the MBC. 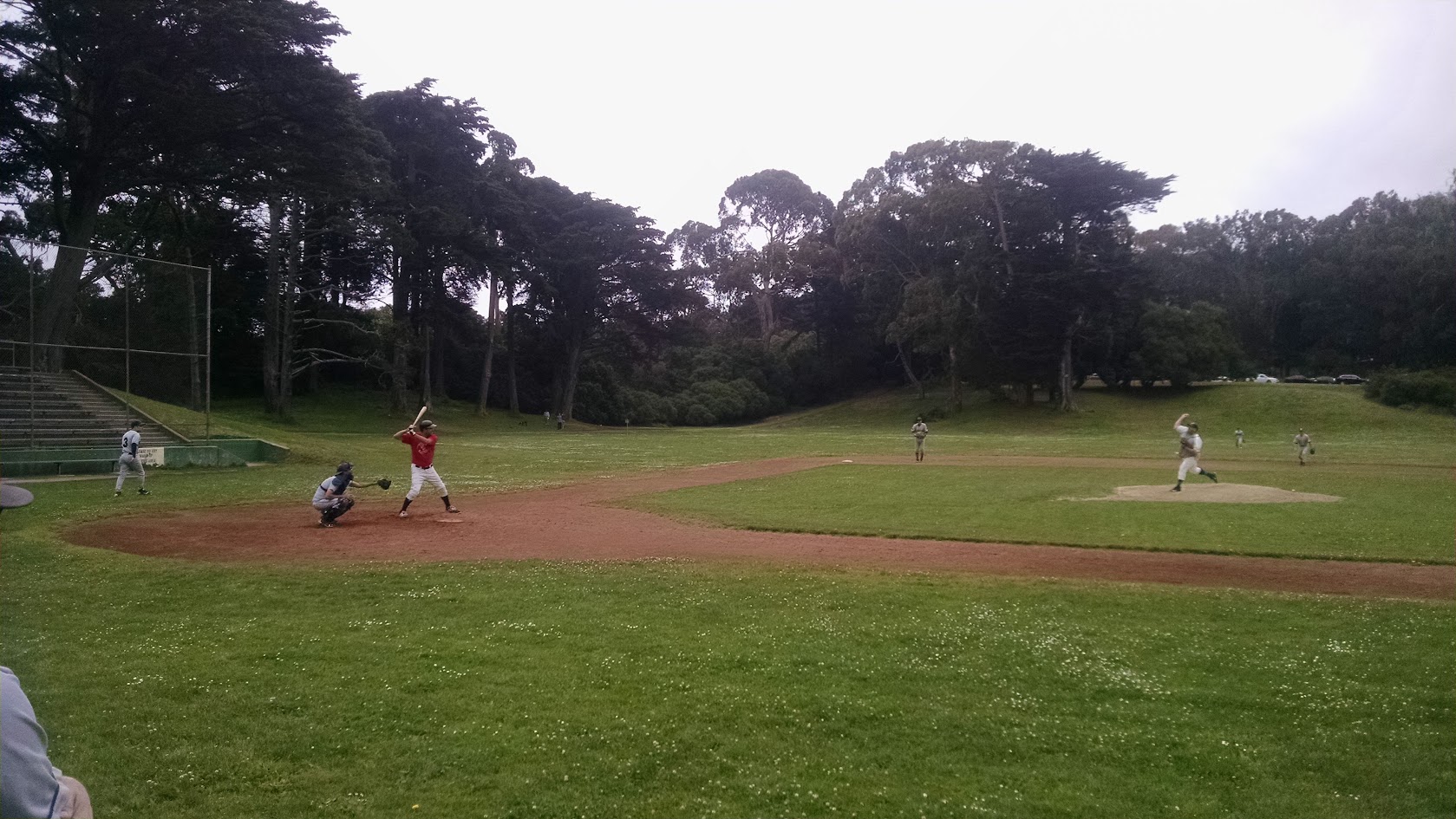 Lattig threw a few more innings and then gave way to Tony Rojas who rode the lightning the rest of the way, and got the three inning save.  The game was very well played defensively, neither team gave an inch, and neither team seemed to be able to stitch together more than two hits either.  The defensive play of the game had to be Daniel, who laid out full-Superman to snare a ball in left field. 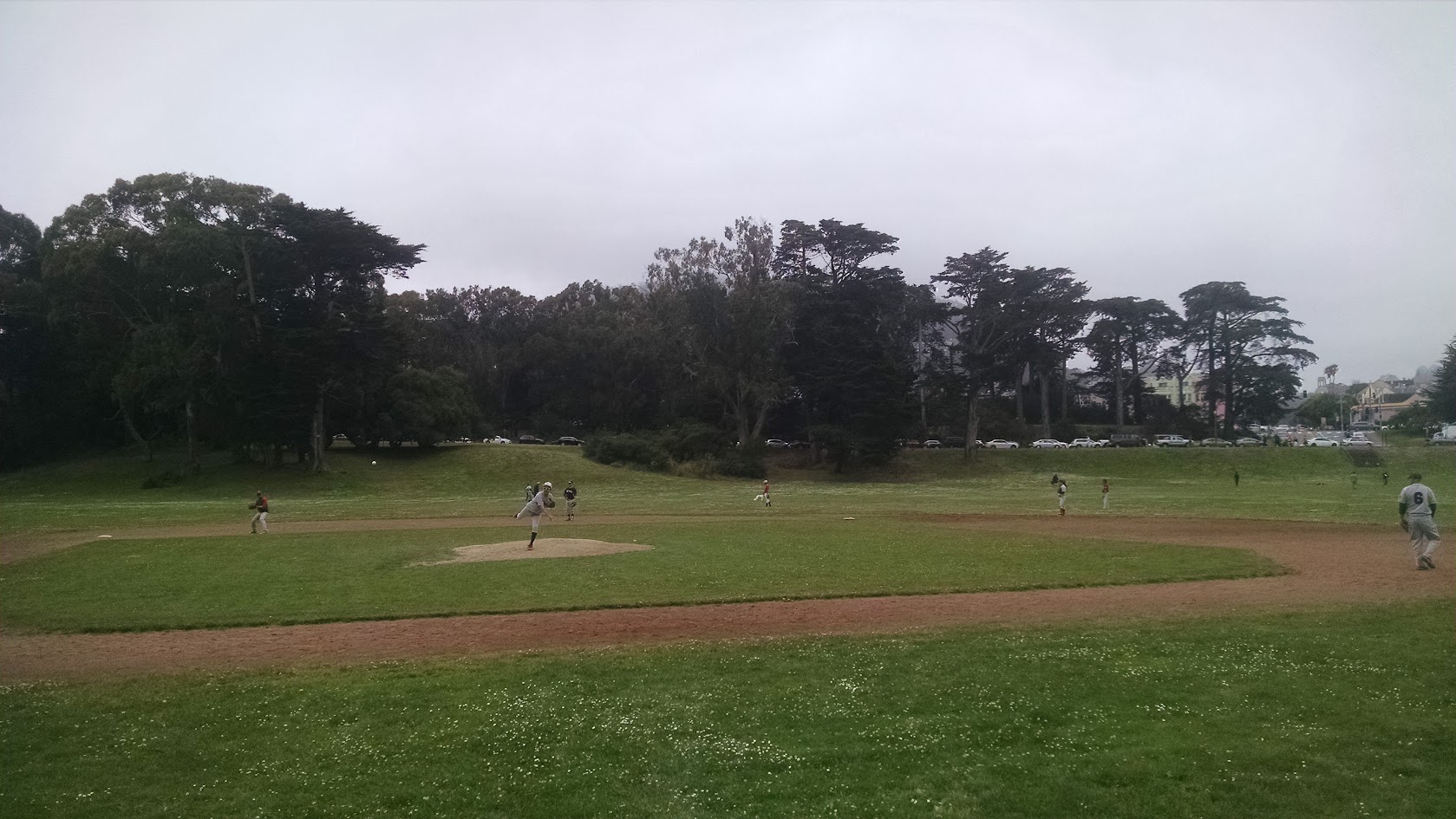 I was pleased with the handful of Ks I got (James, John C!) and the fly balls on knucklers, which was many.

Once again great, we had pulled pork, burgers, hot dogs, ultimate veggie burgers, salad, chips and salsa, antipasti, beer (even a keg of homemade by Oliver!).  This year's AOY was a fiercely guarded secret, Don consulted with Bob about it (who apparently then forgot about the decision), but wouldn't divulge to the rest of us until the announcement when the new AOY was revealed to be.... Don, again.

Yes, he went meta on the AOY award, and did what we past winners have all wanted to do, crown ourselves for another year.  The symbolism of the new, big, gaudy trophy, the MAGA hat, the declaration and crowning of himself as the winner was not lost on us, a bold new direction for the future awards.

There are those in the group who feel that the AOY award has outgrown its function and utility and is now just another barrier to the true purpose of the day.  I am torn here.  I enjoy a little fun with my fun, and to that, the AOY presentations are always entertaining, though I can also admit that sub-cultures and inside jokes do have a way of creating dissonance and may lead to in group/out group hostilities.  I liked Don's take on the ceremony this year, but I admit to being a little dread-stricken when I saw the MAGA hat and the preamble.

It should be noted that no one is required to attend the award ceremony, as this, like all other things on the 4th, is a celebration of freedom.  Perhaps capping all ceremonies at 3 minutes would be a good idea, to limit game burden.  Maybe not trying so hard to be rigid, non-conforming misanthropes would help everyone too.

The original celebration was termed the Bad Sportsmanship Award, given in earnest each year to a player who had trouble playing nicely, or who it seemed went out of the way to exhibit anti-harmonious sporting behavior (throwing helmets, or spitballs being two examples).

It morphed into the AOY when we wanted to celebrate a player who went above and beyond for the club, but who we also wanted to make sure didn't get too swell a head--hence the friendly admonition of being the Asshole of the Year.  In truth, there is usually a "real" winner of the AOY, who is usually a person we kinda despise and or at least wish was more convivial to the nature of the MBC.  By last count, Eli and James (lefty) from several years ago were the perennial winners, being supplanted a few times by others.  You can read more in this entry:

A few years ago Bob started the Horseshit Cocksucker (HSCS) award which was sort of an off-shoot of the AOY, and more in the vein of the Bad Sportsmanship award, given for bad behavior.  But every time we awarded it, the awardee got angry and felt attacked, so I think it just faded away.

The best dressed award was missing this year, presentation of trophy is always on a year-delay, but it should still be acknowledged.  Sean P. is the current holder.

We picked up where we left off, though we had a few leave and few more show up.  Sean, resplendent in his red uniform, started for the (now) visitors, and Phelps for the homers.  Lefty on lefty.

It quickly became a 3-0 game, showing that our team was more focused on the beer cooler than the strike zone.  We got back 1 when I made it to first on a gork hit, and Powell ran for me, making it around the bases easily.  Phelps was distracted by Wes, who was trying to coach him from the sidelines, and after a few , he bowed out, and HR re-entered the game.  I stayed for one inning of that, and then had to leave myself, so as not to come home to my stuff on the front lawn.  The final will be updated as reports are filed.

Here are four different takes on how the game ended up, good to know I am not the only one who doesn't recall this stuff perfectly:

7-6. Same team that won the first game. The home team scored 3 off of Dannie in the bottom of the 7th to take a 6-4 lead. We scraped out a 2-out rally to tie it in the 8th. I believe there was some John Carrey related hustle involved. Greg came in to right the ship on the mound. Then I got a two-out hit (line drive to left. Shocking, I know) to drive someone in from 3rd with the winning run in the top of the 9th. (I blame the beers for not knowing who). Greg locked it down with an easy 9th. I think there might have been some good defense in there somewhere. Likely by Sean. Again... beer.

I could be totally wrong, I wasn't really paying attention to the game. I can tell you greg got two outs on two back to back change ups. That was fun.
Sean P:
Visitors came from behind to win in the second game 5-4? 6-4? I think Lattig or JT knows
Tony R:
But the final of the second was...  Oh shit I don't remember but the visitors (us) beat the homers by scoring the tying runs in the eighth and the go ahead run in the ninth.  Greg closed it out.  Until next year.

* Abe was handcuffed by his girlfriend showing up with her friends, during a pivotal at bat

*  Outstanding defense all around

* To that, I think there were multiple double plays, as well as line drive snares especially at third

* For future reference, Abe's idea of a BBQ potluck is to have his gf bring him a burrito. She didn't though, so now what?  He did bring an 12er of Olympia though, I respect that.

* Greg glided to a fly ball in left that looked like a gapper, and came up with it like it was no problem

* I was taunted for the team breaking up my no-no.  But it was after I had recorded 7 outs in the game, I think one has to at least get through the lineup once before you start talking about no-nos, right?  I admire the heckling though.

* In a twist, Stoner did not slide for a fly ball, and dirty his fancy white pants.  Obviously he needs to come out more often.

* There was a really close play at home, I think the cleat of the runner was tagged just before contact with the plate, but glad it wasn't me making the call.

* Thanks to Nick Smith for the expert photography

*  The sun came out for 3 minutes this year

* Abe is the new Bob, he gets hit alot.  Always on the elbow for some reason

* Bob was hit in the first game, and the gods all smiled

* Greg hit a beautiful opposite field ground ball for a hit.  I was pulled towards second thinking we had a good chance at a a double play.

* Doc came out, but didn't ump or play.  Great to see the old guy though

* New guy Ryan had a nice hit, one of the few for our team


Thanks to everyone who came out, Happy 4th!