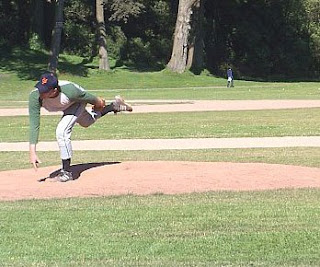 Dave Johnson, patriarch of the Brooklyn Ramblers--east coast faction of the MBC-- sent us this link proving that New York really is the city of dreams. While we Mission ballers are content to accept the occasional bedraggled orphan who wanders in from the woods of Golden Gate Park, the Ramblers are drafting former All Stars.  Cliff Floyd, a 13 year pro, played last week with the Ramblers, which you can read about here:


By all accounts, Mr. Floyd is a class act, and displays all aspects of the MBC ethos.  So if he is any example of the majority of players in the MLB, and follow my logic here, major leaguers are good players, and major leaguers are just like us, ergo, we are all good enough to be major leaguers.  It's so simple!

So, shine up those shoes boys, I am sure that we are all getting the call soon up to the bigs.

In all honesty, this is a pretty awesome story, and I think our only logical response is to appeal to Willie Mays to come and play with us.  Anyone know him?

I am also still holding out hope for a East/West game, maybe we can meet in the middle?  According to a website I just found, that would put the game on East State Farm Road, North Platte, NE 69101.

Hmmm, we should probably discuss this a bit more. 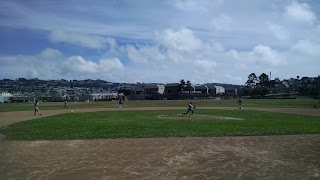 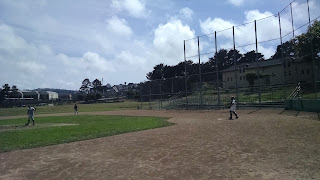 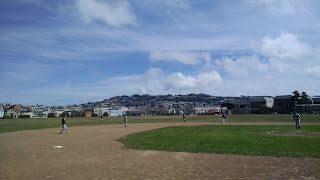 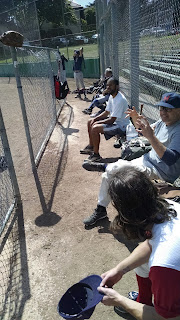 Satch made it very clear that he wanted to eat some major innings on Sunday.  It had been a while since I had gotten more than a few innings of work, and I was dying to stretch out the ol' soup bone for a spell.

Starting for the homers, it looked good, it felt good, and for the first two innings, it went good.  We racked up four runs, and I thought I had it all in hand.  We scored a few more, and it started to look like this was going to be a blowout.

Then Carter, my opposite on the bump, laced a line drive to left that went past the borrowed left fielder and rolled approximately to Mclaren Park for a three run homer.  Welp, at least now it was a game.  The outfield is like tarmac these drought stricken days, so anything that gets there is going to roll, we soon discovered.  Doc showed up around this time and umpired for most of the game.

Carter was off his feed and lasted a shorter time than usual on the hill, replaced by Sonny after the 4th.  Sonny threw his assortment of razzle dazzle and the game settled into the middle innings.  By this time the score was 8-4 (there was a long discussion as to whether we had 7 or 8, Greg was pushing for a 7-5 score, but that is just his anarchist nature).  I kept throwing, and feeling good.

The day couldn't have been nicer, but the lowering sun was becoming a source of consternation for the left field, which unfortunately was also the position that we were trading out, having only 16 players.  It also got hot out on the bump, but the nice thing about heat is that sweat and sunscreen are readily available to load the ball up nice and greasy (whoops, did I just admit that?).

The real MVP of the game was quickly proving to be Abe, who kept rapping out hits, including his own two run home run that narrowed our lead to 2, and in the field he was putting on a clinic of defensive gems.  Our team, on the other hand, seemed to be putting on a clinic of how not to catch pop-ups.  It bordered on surreal, but then, we would pull out a great play, and all would be right again.

True to form, we scored a few more, and then the roof collapsed and in the 8th, the visitors tied the score 11-11!  I was going down with the ship come hell or high water by that point, so I trudged to the bump for the 9th, and held the visitors scoreless to complete the regulation inning game.

But the score was still tied at the end of 9 and so we continued, this time with Josh on the hill, who had patiently waited for me to exorcise all my pitching demons.  He did his job well, and we played through the 10th and into the bottom of the 11th, against a new pitcher, the homers took their walks to load the bases and with 2 outs, Tony Rojas hit a dribbler up the middle for an infield hit and the winning run lumbered home.

* Abe was all over the place, and even hustled out his home run, that still hadn't been picked up by the time he hit third.

* Adam and Nick both played 1st base with aplomb

* Doc was overruled a few times on strikes, which was OK.  He also disappeared for half an inning, which was ruled as overly convenient for the home team.

* For some reason we kept allowing Mitch to cover left for the other team.

* James asked to use the War Hammer, which I thought was great, then he bunted three times in a row, for base hits.

* One inning, Tony, me, and Greg went down in order, without the ball leaving the infield.

* Abe made a spectacular catch in foul territory.

* I hit a fat man triple, which means to right field, with accented roll and a slow outfielder in pursuit.

* Thanks to Danon and the Texas Ranger for swelling our ranks