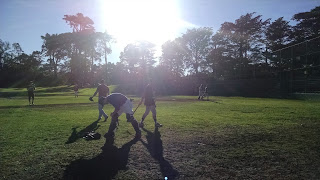 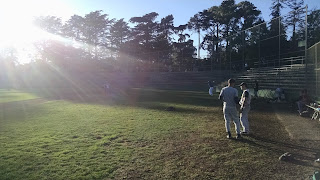 I get two games a year where I pretty much can play, without a lot of bargaining.  My birthday weekend and Fathers Day.  This was one of them.  And I was late getting there, due to other family obligations that I won't mention, but suffice to say, there was some bargaining this year....

Luckily, there were plenty of players, and the day was beautiful, so I got there in the end of the first inning, and dropped right into the ball game.  I played right field for the first few innings, and then Greg, magnanimous person that he is, let me pitch for my birthday.

Sean had started for the visitors, and he was doing well, keeping us from really breaking anything loose.  I was in the hole against Sean, but managed to get two singles, line drive to left, and line drive to right.  The amazing part is that I scored both of those times, I can't remember the last time I scored two runs in a game.

We were up 4-2, then James came up and bunted for a single, then stole second of course, and then scored.  So the next time he comes up, Greg decides to goad him into doing it again by playing on the grass on the third base side of the mound.  James, a New Yorker, wasn't about to let anyone push him around, and so he bunted again.  Greg picked it up, got an eyeful of the afternoon sun and promptly winged the ball past first base and out of bounds.  James take second, and then comes around to score again.  It was all going to be so perfect.

All this time, I am pitching my heart out, despite about four different nagging injuries.  The knuckleball is working beautifully, I think I got at least 5 pop outs on knucklers.  I keep picking on Don for strikeouts and then, just like last game, a pop up in the no man's land behind the mound.  I feel like this one is a little easier, and then I step on the group of spare baseballs we keep back there just as the ball hits my glove, it bounces up and hits me right in the philtrum (anatomy lesson- the space between the nose and the lip). So my face hurts now too.  But I was still having fun.

The entire game, Greg and I are on a diving mission to see who can make more errors, mental and physical.  I came up short on a ball in right, Greg gets a ball in right, hits him right in the middle of the glove and pops out.  His throwing error, my dropped ball.  The rest of the team was picking us up though, Tony played outfield all game and made some fine plays, Chris Powell had another amazing over the shoulder catch as well as one in foul territory.  New guy Dave made some solid plays at 2nd, Ed and Mike were both rock solid behind the dish, Abe made a beautiful play at third, diving to catch a ball and then making the out at 1st.  So other than me and Greg, defense was aces.

Sonny takes over around the 7th, and the mystery of Sonny continues to abound.  He is deceptively fast at times, and just when you think he is wild, he hits the corners and makes you rethink the whole thing.  We couldn't buy a rally.  But the visitors tie up the game, and then go ahead in the 9th, 5-4.  Mike takes his walk in the bottom of the 9th, as he is supposed to.  Steals second, is moved to third, someone didn't take their walk and suddenly there are two outs, a man on third, and I am hitting.  Not what I usually look forward to, but hey, can't say it wasn't a good birthday game.  I get in a hole with Sonny, and then when I think it's all over, I choke up about 4 inches and poke a single to short left, luckily the outfielders were all playing me at 390.  So we tie it at 5 and go to extra innings.  Which was great.

Except that we still can't score a run, and the other team has Mitch, who called his shot after refusing a walk, knowing that he could then steal second easily.  He told us that "he wanted to get his 2 [bases]."  And then he hit a double, and we collectively shrugged and figured, if you can do it that way, why not?  He came around to score, making it 6-5.  We had no more magic to give, though Chris absolutely destroyed a ball that Elvin came up with at 3rd on a wing and prayer, and by his own admission had to take a moment to realize that he had A.) caught the ground ball, and B.) had to make a throw to 1st.  Which he did very well.  There are those of us that now believe that Elvin is a really, really good player but only when he is in total shock.

* Thank you to everyone that made it out, I would have been real bummed at a Havana 6 game for my birthday.

* Kudos to James for bunting in the face of the bunt shift.

* Bob was coaching the first baseman after he dropped a thrown ball, to get Bob out.  We think maybe he didn't want to keep running, but was obliged to until the out was recorded.

* Sean and Sonny both did a really good job on the mound, as did Greg, and I want to say that I appreciated getting the chance to throw.

* James made an error in center field, very uncharacteristic, that allowed us to score a run.  He continued to snap catch fly balls after that, ala Ricky.

* Loren showed up and dragged himself into the fray in the middle innings, but couldn't come up with the big hit

* Mitch hit one between 3rd and SS, and Chris made a great sliding stop to keep the ball in the infield.  The next time, Mitch hit it just a little different and it perfectly threaded the defense.  He's always trying to improve....

* I was cited for giving too much direction to the team during plays, I always like to think of it as real-time encouraging commentary.

* My steadfast refusal to back up 3rd continues

* Ed chose to signal a fair ball with arm only, on a long drive down the left field line.  I like the nostalgia of it, but I bet defense and offense alike would appreciate a vocalized version.

* After popping up a first pitch knuckleball, I asked Bob how he could do such a thing?  He told me I was tipping my pitches.  To which Chris replied, Then why didn't you get a hit?  It's a valid question.

* Thanks for a great game, my philtrum hardly hurts at all anymore.  My adductor longus, iliocostalis lumborum, plantar fascia, and deltoid and teres minor muscles on the other hand.....
Posted by S. Paige at 12:27 PM No comments: