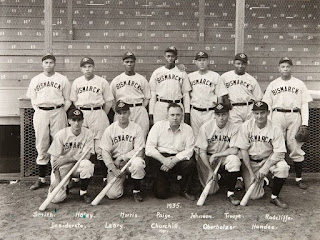 I found this old post when I was noodling around recently, and thought it would be interesting to update with the changes in the last 7 years.

http://missionbaseball.blogspot.in/2011/11/mbc-stats.html
The first thing that anyone can notice is that there are a lot less write ups per year, mostly due to the fact that I have two kids and a wife now that demand a lot of my time.  Still, I am averaging about 40% attendance, if you count the write-ups as times when I for sure played.

I wrote up this list in 2011, and the updated information is added in red to reflect status or a growing list at the end to incorporate the new dope.  The overarching theme is that the core is pretty much the same, and that the MBC has been repopulating the world in the last few years. 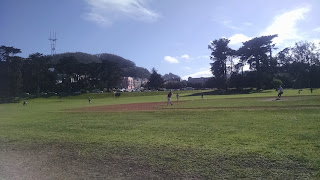 Two weeks in a row, who could believe it?  Of course the holiday weekend helped salve Mrs. Paige into agreeing to let me play again.  This amazing weather we are having was real nice too, it was supposed to be remarkably colder on Sunday than it was, though we did have 3-seconds of rain at one point.  We also had 22 people out, including relatives of Ed and Nick W.

Sonny started for the homers and was lights out for the first few innings, we were stymied as usual, hitting the piss out of the ball but right to somebody, or awkwardly chopping it weakly on the ground.  I got the start for the visitors, after some well-timed whining and cajoling, cap tip to Lattig for being decent enough to let me throw.

Now there are those that might say that the teams were a little askew.  We might want to consider a rule about Chris P, James, and Sean P. being on the same team, since they are all guys that can hit for power, steal whatever base they want, and play multiple positions.  And if I wasn't on the same team as all those guys, I would have probably made a fuss about it.

In any case, the homers gorked, dinked, and flopped two runs out of me in the first inning, they were concentrating all their hitting to the gaps, but only to about 170 feet.  And it worked.  Luckily, that passed, and they never scored again.  I had about 6 Ks, though some of those were people who had never played with us before, so taken with a grain of salt.  But still, felt like a good workout.  Tony came in for one, then Sean for the close, the score being a lopsided 9-2 at that point.

The real story is that I was finally on a team that cracked the Sonny code.  It wasn't pretty at times, but dammit we did it.  In looking back at the blog, I cannot find an example of being on a team that hit Sonny well, so this could be the first time I was on a team that beat Sonny.  He threw the whole game, and earned his stripes for sure, but it felt good to just once have a decent game against him.

The other big story is that Elvin, playing in his third game of the weekend, made an amazing catch in deep center to rob me of a extra base hit, and came up with an injured hammy for his troubles.
This was essentially the play he made:

I would say it was worth it, but I don't have to limp around for a month.  It was an official bad-ass catch and I tip my cap deeply and humbly.  Sidawi, in true AOY manner, told me that I should protest the play (from his own team!) since Elvin was playing outfield with a left-handed first baseman's glove.  To whom should protest to, is the next question?

The game was so crisp, the weather was sunny and warm,  jokes and bullshit peppered the conversations, the only thing lacking was that we were missing the Captain, Greg, who is still laid up with knee issues. Get well soon.

* Ed caught the whole game, as did Tim, and both did very well

* Bob continues to hit triples and stay at first base

* The bums sitting in the stands had one of the best playlists rocking, they were all over the map: outlaw country, speed metal, oldies, black metal.  Guy was in the zone

* Sean on third, I thought a safety squeeze was in order, especially when I saw Nick W. playing so deep.  I bunt, perfectly I might add, and make it safe at first with no play, only to see Sean still on third....

* I had the chance to catch a pop up from Bob, directly in front of him at home

* The game went so quickly that we decided to lose an inning again, and we were still done by 3:45

* The defense was pretty sharp, but the errors that were made seemed costly

* I didn't charge the first ground ball that came back to me on the mound, and it bounced right by.  The next one I did charge and threw out the runner by 40 feet.

* Tony almost had his face taken off by a hard grounder at third.

* Sonny fouled a pitch that was 6 inches above his eyes

* We bucked the odds and had Sean at 3rd for a few innings.  He made a nice play

* Dennis made a good play in left, after a close but no cigar play on a foul ball

* Loren showed up late, got a nice hit

* I was dangerously close to recreating this infamous play, after I stole second in an attempt to get picked off an score the runner from third.  Right fielder dropped the pop fly, and I was safe at 2nd, but I was all over the place:

* Tony and I almost pulled off a no-plan squeeze play.  He gave me the cap tug from the batters box, and I answered him right back.  Unfortunately the bunt went foul, but at least we understood one another for the moment.

Hope that leg heals quickly Elvin, I can write a letter of explanation to your baseball tryouts squad if you need it.

It was a gloomy day in the beginning, all that 70+ weather had faded into a gray foggy cold afternoon.  But like most things, you wait long enough and you get the pay off.

I saw the start of the game from the road, as I cruised back and forth trying to find a parking spot, or stalk someone who looked like they were headed towards a car.  Mitch was the starting hurler for the homers, and he did a great job, mixed up his pitches, kept the runners close.  He lasted 8 innings, I think?

Tony started for the visitors, and the very first pitch, Powell took him way deep to left field for a stand-up triple.  The homers were hitting Tony square for the first few innings, and only because of some well-placed defense did we walk away relatively unscathed.  But Tony kept battling.

We had 22 active players, which was nice, including James' brother, Kevin.  Baseball ability seems to run in the family.  Instantly recognized as Coney Island kin, when after a sac fly, he walked back to the dugout saying, "Well, at least I moov-ed the run-nuh."

I took over in the 6th, and everything felt good.  It is amazing what rest does.  Jimmy caught the entire game, and did a really good job at blocking the dish, and calling the right pitches.  I have a witness in Adam, who saw from first base, a fastball I threw that came out of nowhere, and was easily the hardest ball I have thrown since 2004.  I don't know what I did different, but my arm didn't explode the next pitch, so that was good.

The visitors took the lead in the middle innings, and held a 8-6 score going into the 9th inning.  That was actually the 10th inning.  We flim-flammed the box score since the game as already into the later innings and it wasn't even 3pm yet.  But who wouldn't play extras on a beautiful day, with plenty of reserves?

Jordan, who has been coming regularly and proved himself a good guy, had asked to pitch last week, and this week got his shot.  We threw him directly into the fire with a save situation.  It took him a little while to find his delivery and location, but once he got it, he was great.  The homers scored once, and were threatening, but we buckled down and took the game, 8-7.

* Kudos to Jimmy for catching the whole game

* Kevin and James connected for two of the closest plays at the plate that I have ever seen, and just missed the runner in both cases.  Kevin's arm from center field is just as potent as James'.

* John McG and Aiden combined for some outs, father and son style, and Aiden had a legit hit to center field, off real pitching.  He's practically a grizzled veteran now.

* I screwed up play at first, ball hit me right in the glove and fell out

* Adam had couple of key RBI knocks, and was told by an MBC'er that his at-bats are the best to watch, he appears totally relaxed until the moment of contact

* The dilemma continues:  bases loaded, one out, do you play corners in, or infield in?  I think the ethos of the MBC is more about getting outs than double plays.  And we have fucked up so many easy chances at double plays up the middle that I don't think it is a reliable play to base a strategy on.

*Powell and I had a epic battle in the middle innings, I think he fouled off 6 balls in a row on a 2 strike count.  I was scraping the barrel for pitches I hadn't already thrown multiple times

* My first at bat I tattooed a ball to left that happened to occur just as the wind died.  Left fielder tracked it down on a dead sprint.  It was a great play.

* Nick Smith, me and Jimmy combined for a 9-4-2 play at the plate, to nab Aiden as he came in hard.  That's why we hit the cutoff!

* Many of the pitchers in the game had at least one inning with sub-7 pitches thrown.

* Helpful hint: When you are tall and fat, you don't need to slide or anything to break up the double play, just run straight at the second baseman.  If it's Dennis, he can't see around you.

* Both teams hit the ball hard all day, but directly at someone for the most part.  Tony caught a line drive at third that he never had to move for, it would have killed him if he hadn't caught it, it was smoked.

* Brian Phelps was later than me, so he gets to be the Late Asshole.

Severe drought in our futures, but for the time-being, the weather sure is nice for a ballgame.

Post-script: Get well soon Greg, it's not the same without you.  And stop kicking cars.
Posted by S. Paige at 11:49 AM No comments: