Ruminations in the Rain 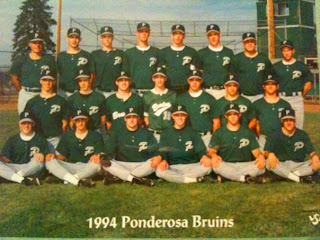 This is always the worst part of the year, when the storms come in, the ground gets saturated, and even two or three days of sunlight can't do enough to make the field habitable. Sundays are filled with housecleaning, walks, dinner with in-laws, museum trips, movies I have seen already, and talking about my feelings, and the different ways we can get 1.9% interest on our house fund.

We've had rain showers and sunlight in the span of twenty minutes lately, and every blue skied minute, all I do is think about the next game, the next at bat, the next knuckle ball. The wife hates it. Some bad moments in the first few Sundays when we were off doing our own thing. I eventually learned not to mention it until the end of the day. To her credit she sometimes plays catch with me on Sundays, when I can't make a game. She's a classy lady, I don't know what she sees in me. And her family asks me before they plan anything on a Sunday, just to make sure that I can miss a game. They're great people, even if they don't understand the game.

Is it the gamesmanship? The camaraderie? The good people? The history of the game and the club? Sure, but that's not all....Maybe it's more of the individual aspect, where every game holds the chance each of us to be the hero, to be a part of a comeback, or just the opportunity to succeed? Maybe. But losing is much more a part as they always say. Historically speaking, the best hitter ever, still failed 6 out of 10 times. And the losses used to stay with me, back when games mattered. But now, I almost enjoy a loss if it's a result of a good game played, a stunning comeback, a weird turn of events, or even a hobbled 158 lb. Rainbow Grocery clerk with a wise mouth and no glove.

The other thing about baseball, to quote the late A. Bartlett Giamatti, is that baseball was designed to break your heart. As a Giants fan, I have started to really understand what the hell that meant. I have lived through two World Series' now, that Giants have had a chance to win. Well OK, once anyway (The '89 series? I say this a loyal Giants fan, the A's were a much stronger team, and there wasn't much of chance). Cubs fans? I can't even imagine what that's like. But I am starting to. I went to spring training a few years ago, and we went to HoHokum stadium or whatever its called, and I had a great time. It felt familiar, the fans, the hopeless positivity, the shaking head mistakes, it was all like home. And frankly, I saw a lot of the same mistakes we make in the MBC. Well, actually, I never saw anyone throw a five strikeout inning and lose a save....

And when you look at the rain, I know you think about them too.

The field had a little water left from a rain that no one could remember, and the pickup guys before us were kind enough to let us get on early, for the second game of the 2010 season. Starting for the visitors was Johnny Bartlett, resplendent in his Mission uniform, and willing and able to go the distance, which he did. Satch started for the home squad, warming up on the bump as his team was morphed to make sure that we had a competent shortstop, and not too many big bats.

The first few innings were bang bang, as one hit, an infield single from Vic was all any of the batters could muster. Johnny was keeping it all around the dish, mixing his slurvy stuff with his wrinkle stuff. Satch kept the changeup in rotation, mixed with a fastball that was livelier than usual, maybe due to the brisk temperature, and a knuckle that had some funky hard dive.

Finally in the third, we got to Johnny, and quickly put three runs on the board. They answered right back with 2 of their own, and a ball game was underway. The runs started to mount up, on both sides, and by the time Satch left the game in the 6th, the visitors had retaken the lead with a 5-4, which then became 7-5. Johnny had settled down and was throwing stellar ball, and we homers were befuddled as what to do. Satch had an emergency call from the wife, a cluster-fucked de-railer and chain mishap, had to leave the game for a few minutes. I lead off the inning with a first pitch single (frustration hit), got a ghost runner, and when I returned the team had capitalized and the score was 8-7, us. We went to the 9th, and the visitors suddenly came alive and scored 3 runs, 10-8, demoralizing turn of events….OR was it?

Girding up our reserves, and relying on the 6 men we had left (injuries and Punk rock had drained our team of more than a few members) we followed guffed ball, with line drive and sacrifice fly, and before we knew it, we were bases loaded and Sean up at bat. He promptly sent a sacrifice fly that scored the tying run, and we had men on first and second; the score knotted and tied at 10. In stepped the seasoned Nick Smith, who waited for the pitch he wanted and laced a drive over the infielders collective grasps, Gaspar hurried home and the game was won (Thanks to JT for remembering this final bit, good thing I was not the go ahead run, with my head that far out of the game).

Johnny (once again, a great game, all heart) kept his head high as we collected the bases, shook hands and wandered off to our lives for another week.

*Johnny, too often you get the raw deal in your Complete Games, but you looked good.

*Thanks to everyone who stayed to help finish the game

*Sean, for looking great in his new Evergreen uniform, and pitching three innings of strong close out ball

*Dennis, not the best idea to talk shit to a pitcher when you are in the batter’s box, or ever for that matter.

*Edwin, with a great catch on my hardest hit ball of the day, could have been a double!

*Anthony, also with a much needed catch in right

*Thanks Tim for squeezing a couple of foul tip third strikes

*Johnny and Greg took me to the woodshed a couple of times, with runners on, thought I was being cagey, turned out I was just foolish

*Some strong in-fielding plays: Gasper, Tony, Chris, and a double off play in the 9th.

*Gaspar recorded 4 of the first six outs for the homers, once again proving his utter versatility

*Nice play on a troubled grounder to the right, JT!

*Good to see Vivek, short though it was, hope the elbow is healing

*Lattig, once again, there is little chance of stopping him at the plate (but slow curves can do it once, never twice…)

*I muffed a picture perfect double play ball, then dropped it a second time trying to get one, I hate that!

A lot of rain, but we will keep our fingers crossed. 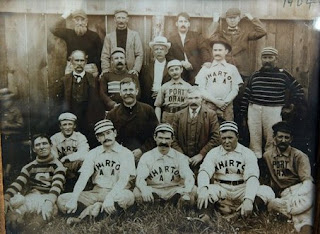 So I will get the easy ones out of the way early. This was the best game of 2010, so far....and by far the most beautiful Sunday, of 2010, up to this point....Girgus, now that you got all those plays out of the way, we will be looking forward to some stellar games.

In any case, we had 19 people, on an amazing day in the Marina, we waited a few minutes for the pickup game before us to end, seemed like good guys. We had a salty dog kind of show up with Brian Girgus back in uniform, Johnny in Enid flannel, Stoner on his monthly furlough, and the rest of us motley pill hoppers.

Brian Phelps had challenged me to a heads up kind of thing last week, and the rain just staved off the sun long enough to make the field unplayable, but that was good enough to whet the appetite for this weeks contest. I accepted Brian's challenge, and took the bump with a strong defense behind me, I thought.

It didn't take long for the visitors to rack up a 3 run lead, and Brian set our boys down in order in the first. Satch would not let the shutout go any further, and stepped into a curve ball and hit it a very long way into right center. A double on my holiday legs, but the distance was pretty epic. 3rd on a fielders choice, and home on a blooper past the diving pitcher, and the shut out was broke. Another run tacked on and we had a good game, 3-2.

Next thing you knew, it was all tied up, 4-4, and we had a homerun, excitement, sun spots, bloops, runs, double plays. And then, it was 8-4, the visitors having taken the lead back handily. And that's pretty much how it stayed. I lasted until the 7th, lengthened by the a couple of great team play low pitch innings, Mike Lattig took over the hurling duties for the visitors team, and Mitch closed it out for the last. We never retook the lead, and the closest we came was 11-8, then it was 14-9, and in the dwindling twilight, us homers went down in order, and the first game of the new decade was in the books.

* Some great hitting on both teams.

* Greg's headfirst slide into third was amazing, as well as frightening, as Vic came down next to his head

* A very strong line up of Lattig, Phelps, Chris, Mitch, tough to have four battles in one inning.

* Chris, Mitch, and Brian had some great plays in center as well.

* Thanks Nick for reminding me why I wear a cup all the time, three inches higher and I would have needed a lot of ice tonight.

* Bob HBP +1, a knuckle ball skip off the back, and then to the bat

* Solid base running today, on all parts

* Ok, so I hit a home run, felt good, it has been a long while, and thanks Cagle, for reading my thoughts perfectly when I was coming into third, I was totally happy with staying there, glad I went though.

* Lattig, superb pitching after a long time, same with Mitch

* Ben, thanks for the seeds, minus the pickle and ranch...

* Thanks to all those who don't swing when we are stealing bases, the number of times we have to reset due to foul balls gets real old some times....

* Chris almost had an amazing play at short, you had to be at least 10 feet in the air, just barely missed it!

* A toast to all those who overdid it on NYE, and made it out, I know I was pretty hairy on Saturday, damn Manhattans, I'm going back to tequila.

Don't know the forecast, but I do know that next week is West Sunset, 2 pm.