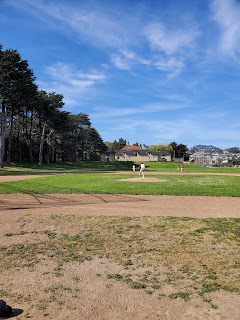 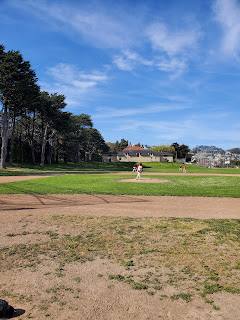 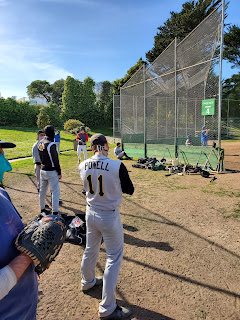 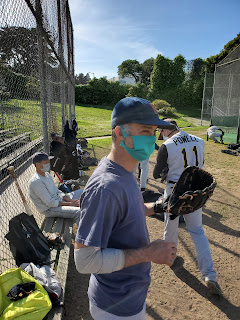 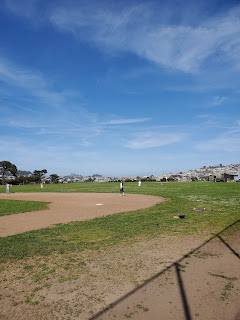 Well, it was a lot better than last week.  We had 23 people out to play, on a nice day, a little breezy and occasionally chilly, but a fine day for a ballgame.  Sonny was starting for the visitors, and Sean for the homers.  Both went several innings, and the game stayed very tight.  Homers scored a run in the 1st, visitors tied it up, then they went ahead, then the homers went ahead.  It was tied up in the middle innings, Nick W. took over pitching, then Chris L came in for the homers for an inning, then Satch for the last.  For the visitors, John McG took over after Sonny, then Mike N.

The score was tied 4-4 in the 9th, and we were able to get 2 outs, but the 3rd out eluded us, and with dying quails and a misplayed grounder, the visitors scored the run that they had been looking for and took the lead.

We had had so many players that we thought about extra innings to make it more fair for at bats, but by the time the 9th came around, it was getting cold and we wanted to either win quick or lose quick.  First batter got out, but then we got a baserunner, and Greg came up.  Unfortunately, he did what our team had been doing the whole game, he hit it to Urano, who picked it up, kicked 2nd, fired it to first and game over double play.

* The Return of Urano.  I think we have forgotten how much of a difference he makes, at the plate and definitely in the field.  I will say it now that Powell and Urano are never allowed to be on the same team.

* New guy Virgil was also out, made a good catch in left, and had the frustrating day at the plate that we all remember from our first foray back into baseball.  Timing takes a few at bats to come back.

* Tony played, tried to bat, but thumb is still smarting.  He was able to play defense though!

* Some of the hardest hit balls were caught, including one that Anna snagged at first that was a bullet.

* Our team was almost caught twice on the base paths at close plays at 3rd and 2nd (some might say that we were caught....)

* John McG came in for the first time, as he put it, in a real game situation e.g., a non -mop up inning.  He threw real well, working a snappy sidearm approach.  Solid first outing in a high pressure game.  Atta' boy!

* Lattig has gone from Babe Ruth to Ruth Buzzi in the last few weeks at the plate.  He'll come out of it, I am sure.

* At one point the visitors had a defense on the left side that was really unfair:  Mitch at 3rd, Urano at SS, Gabe in left.  Anyone of them could throw us out from anywhere on the field.

* Matt Stone made an appearance, I guess he has come a few times recently, but I had missed him.  Good to see him out, and he made a nice catch in center, and didn't even Stoner slide!

* Powell made a couple of really nice catches at SS, a few line drives and a few over the shoulder pops

* Sean also made a nice catch behind the mound, something I don't think I can do anymore

* All in all, a great game, wonderful to see full teams, and a fun way to spend a Sunday.

Late posting, but this game was pretty bad, we only had 12 people show up, so we played 6-6, two outfielders.  It isn't very relaxing when you don't sit down for 3 hours of play.

The game was fun, got a lot of at bats, and we made the most of it, but not a game to repeat too often.