No idea of how it all went, but here are some pictures of the game, appears it was a foggy day....

Thanks to Nick Smith for the photos.

Well it was a hell of game, for at least one team.

The weather was nice, foggy at times, maybe a little chilly, but not terrible.  We had 15 to start and then 16 with the late addition of Paul and his two kids, who took a at bat mid game.

Chris Powell, who now fancies himself vying for Oil Can Boyd's position, started for the homers, and Satch started for the visitors.  For some reason, we just couldn't get a hit.  Oh I know why, the infield was literally the worst, thickest ground ball killer I have ever seen.

I counted at least three hits for myself that would have been legitimate hard base hits.  Instead, the infielder had to walk over and pick up the ball after it had stopped rolling.  Real bad.

The homers on the other hand, figured out the way to get runs was to mix in hits to the outfield with short flies and letting us make the errors.  Which we did.  Round about the 5th inning we finally got everyone to a position that they felt comfortable at, but by that point the damage was done.

Doc came out and officiated, to mixed reviews, we had to do the stare down and the extended frame to get him to call a few, but on the whole, he called a good game.  We also noticed that Doc likes to make the initial call on a play, then sort of see what the consensus is before he makes his final ruling.  That's fair.

Will took over for Powell and shut us down even more than we were already doing to ourselves.  Satch went the CG, and absorbed the loss, which was satisfying at least that I stuck it out to the end....

* The visitors had a great time losing that game, great to see Rojas back in form, and Greg, back from vacation

* Great to see Doc out and about, he brought his own gear too!

* Elvin had a rough one, but we encouraged him to keep his chin up and he scored our only run!

* We had a new guy, friend of Ed's, come out, who played well, and unfortunately had the bad luck of a few ifffy calls, hope he comes back

* Tony's barehanded attempt in center didn't go quite like planned

* Our best defensive play involved Sean from the other team playing 3rd (of course) and backdooring his own team member.  Well, that's Mission baseball.

* Will brought out the sledgehammer and dealt with the rebar on the mound issue!

* The knuckleball was working, if you don't believe me, ask Adam.

* Thanks to everyone who made it out.

As those of you who are actually reading this ongoing raggedy manifesto, we were graced with the presence of our favorite food critic/writer/chicken farmer L.E. (Dani) Leone two weeks ago.  As you can see, it pays to know celebrities, for, lo and behold, this week, the MBC's exploits were cataloged by Hedgehog in the Cheap Eats column!

Have a read, preferably with a handful of succulent BBQ.

Southpaw BBQ is more than a pinch-hitter

CHEAP EATS Hedgehog got me this Groupon for a fancy pantsy mani-pedi at a place in San Mateo puts flower petals and orange slices in your feet water! It's hard for me to hold a grudge, however, because at the time-of-purchase we were living in New Orleans. For all she knew, San Mateo was a suburb of San Fran, like the Sunset or the Richmond.

Nope. You have to drive.

So I was driving back, all relaxed and pretty and shit, and there was Candlestick ... and it was very nearly (at the time) football season ... and the only thing I don't like about getting my nails done is the way you smell for the rest of that day. I mean, I am, at heart, a chicken farmer. Lookswise, I can handle being beautiful, but it's my nature to smell like hay. Not mimosas.

It takes about 30 minutes to drive from San Mateo to the Mission. Around about Candlestick, I'm saying, enough became enough. Deciding finally to change the smell of my fingernails, I swerved off the freeway in search of barbecue. In search, specifically, of Franks, where I had eaten once recently on account of another goddamn groupon, this one courtesy of Earl Butter. Who, to his credit, did apologize for eating all the brisket off our threeway- combo before Hedgehog and me ever even knew what hit us.

Turns out the brisket is Frank's best meat! It's tender, smoky, and doused in a really good, hot (if you ask for it) basic barbecue sauce, I now know. I got it to go, and they gave me a fork. But I used my fingers....

Sunday's baseball was Mission vs. Mission at Balboa. In my copious notes I dubbed the home team the Good Guys and the away team the Better Guys. Chicken Farmer and our friend Long Tall Phil were playing for the Better Guys, hence that side's upgrade.

Unfortunately, I don't know many of the other players' names and resorted to nicknaming them mostly based on what they were wearing, who they reminded me of, and the few scattered facts I remembered about them from previous games. For example, there was Big Blue, Hairdo, Walnut Creek, Old Timey, Lost Horizons, and In'N'Out. After a while, my play-by-play reads more like I'm calling a horse race.

Anyway, I don't know how many folks are interested in rec league games, but I think more are probably into Fantasy Baseball. Then again, I don't know which side of the fence the readership of Cheap Eats falls into demographically so I'll cover both bases with one bird and say that in my opinion, Fantasy Baseball should allow for at least one Rec League player per team.

My reasoning is as follows:

1) Rec Leaguers steal a ton of bases. I am in a Stolen Bases race in my Fantasy League right now and if I had In'N'Out or Gray Shirt Tony, or even Chicken Farmer herself, I wouldn't need to put all this imaginary pressure on Michael Bourn to do what I'm pretend-paying him for.

2) Rec Leaguers are almost all multi-positional and thus, very useful when setting your lineup. I mean someone who plays left field, short, third, second, catcher and pitcher? And steals three bases in one game?! I mean come on...

After the game we went to my new favorite barbecue, which isn't Franks, but only because you can't walk to it from our house. You can walk to Southpaw. What my beloved and bristly sportswriter couldn't have known from the press box was that the whole game in the dugout we were talking about barbecue. The box score for the Mission's new smoke house reads: weak, weak 'cue. At least the ribs and brisket. Go for the sides, which are awesome. Pulled pork with beans and (get this) bechemel over warm potato chips, brussels sprouts with bacon, and my favorite: smoked goat served with fry bread. For that, I will be back. 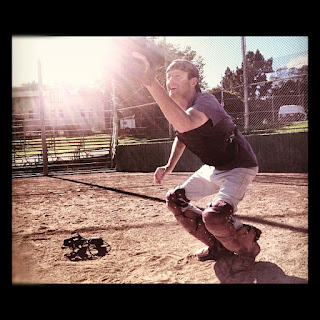 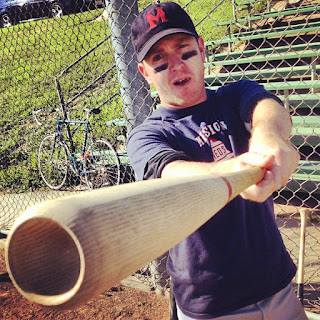 Here is Snyder with the recap.

The game turned out fun, but attendance was weak. Only 13, so I caught 8 innings for both teams so we could play it like a 7 on 7 game. Mitch pitched a complete game for one team. Mcgrath, Ed and Bob all made pitching debuts with varying degrees of success before Sean finished it. Bob didn't make it out of warm-ups. JT had a long line drive single, Sean crushed the ball and we wanted to walk him, it wasn't Bob's day at the plate either. Ed pulled a Campanaris, which is apparently playing all nine positions. I have no idea who won. 7-5 I think.

It was a beautiful sunny day everywhere in the City except at the ball yard, and even then, it wasn't so bad for the first hour or so.  We had a motley crew of regulars and long gones, and new guys.  We ended up having full squads which was refreshing, bolstered by the return of everyone's favorite lady, Dani Leone, and she brought a new kid with her, named of Philip, who looked like a heshing hipster, but his batting stance and defensive play told us he knew what the hell he was doing.  Tony, from the block, wandered in and asked if he could play, we quickly found out that he could, hope he comes back and is on my team next time....

Johnny went the distance for the homers and threw a great game, Satch threw 7 and turned the ball over to Dani, who did great considering no pitching for the last few years(?).  The game was a low scoring affair, but not many cheap runs, we played a pretty tight game, considering that not everyone was playing their most desired positions.  The Final: 7-4?

* Johnny threw a great game for a unemployed beatnik

* Tony was 5-5 with multiple put outs in left, and stolen bases.

* Doc showed up and hung out, we didn't have any gear for him to umpire, but it was nice to sit and visit

* Satch had two doubles, one on a change up that I had time to lick my chops, and lift my leg Sadaharo Oh style

* The perfect day for bunts, the infield was super slow, no one bunted

* Visitors tried hard to hit the ball on the ground, and flied out about 13 times

* Tony made a social visit, his back is messed up from half-piping...skateboarding and baseball do not mix

Good times, even when the fog rolled in