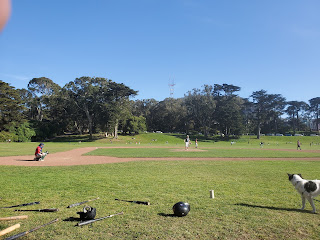 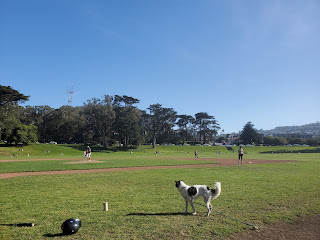 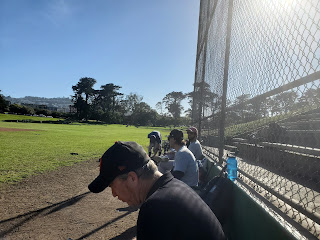 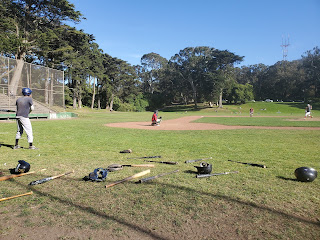 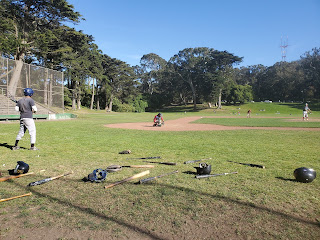 Beautiful day!  A little hard to park.  I made 14 when I finally got there, having parked Betty White about 12 blocks away.  Elan and HR showed up soon after we started, and we had 16, almost a legit game.

Brian Phillips was on the bump for the homers, and Satch for the visitors.  We bandied back and forth a bit, but we scored a run or two off of BP early, and never looked back.  Brian was throwing well, but our team was hungry for hits, and we also had Sean, Mitch, and Powell, which feels like it might be lopsided.

I have continued to go with what works, and that is batting practice fastballs right down the middle.  Well, to be fair (TO BE FAIIIIIIIIIIIIIR) I was keeping them high and a little inside too.  Several innings went by with pitch counts of 8, 11, 6.  Makes a guy feel like he could pitch forever.  Then I tweaked something in my neck, tracking a foul ball, and that let me know it was time to stop.  Felt good to get some real innings in though!

Chris Powell took over for me, and Sonny took over for Brian.  The defenses were pretty solid, though it was noted that anytime Powell pitches, his team suffers the loss of the SS abilities.  The homers made an honest show of it, but fell short.

We never really had the game get too close, it was about 5-2 when I exited, and I think the final was 9-2.

* John McG made a couple of great catches at SS, including one for a double play, and then caught the latter part of the game.

* Mike Lynch had a smoking hit down the right field line.

* Mitch may have been the difference, he was playing left and center, and made some crucial outs.

* Greg had a nice line drive

* Got hung up at first, on a fly ball to right that looked like it would be caught, but then dropped so I had to "hustle" to 2nd.  Luckily the throw was off line.

* Powell scored many of the runs we had

* Anna smoked one down the left field line, for a RBI late in the game

* Thanks to Greg, McG, Bob, and Gaspar for catching

* The olde tyme game at the other field was a riotous affair, lots of fans

* I brought out the throwback Big Barrell Easton, but all it did was hurt my hands-- I was on base 3 times but never due to a hit with the metal.

* The 3pm start is nice in that it leaves most of the day to get things done, but Mrs. Paige doesn't like me rolling in at 7pm on Sunday night.  Dare we consider a 2pm start?