I fully admit to being late, just so everyone is clear here.  Sorry.  Glad I made it though.  Sort of.  The day was mostly sunny and cloudy, and there was parking in the park, maybe as a byproduct of the Burning Man.

The score was 11-0, when I arrived, and I was placed on the home team, as a salve to hopefully remove some of the pain of the blow out.  Mike Lattig had started for the homers, and it sounds like it was hit, error, bloop, bloop, blooop.  Chris Powell was on the mound for the visitors, and was pitching effectively to his defense.  We tried to work a 9-7 team break down, to give us 2 defensive fielders to "even" the score, but the visitors saw through that chicanery, and we ended up with the more sensible 8-8.

John McG came in after Mike and pitched effectively, though he was the first to admit that when you lose it on the mound, it can be hard to regain.  Chris Leavitt replaced Powell, which made it harder for us to rally, since Powell was now back at SS, taking away hits.

We had rallied on the back of a few hits, errors and John Carey's wild arm to bring the score up to 11-7, Urano having a in the parker down the left field line that he scored easily on, but the visitors promptly took two more runs out of us, including a triple from Powell that sounded like a pop fly off the bat, but went really far into the gap in left center.

I took over the mound in the 6th and took it the rest of the way.  Other than the 2 runs, it felt good, had a few Ks.  Loren came in for the visitors and stomped on our throats for 2 innings just to make sure that we didn't smell victory.

* The return of Kenball!  This SF native is back amongst his own, the first in what we hope will be the reverse migration of the East Coasters.  If you haven't made up your mind yet, hit us up in January when we are still playing ball.

* The visitors had a strong hitting lineup and made the plays.

* Urano with the round tripper!

* James made an amazing diving catch to take a hit away from JT, that's doing your homework, people!

* Bob had not one, but two balls hit over 1st base, one that actually hit the base

* I have a lifetime experiment that I am running on not watching while routine fly balls get caught while I am pitching, the odds seems better for outs when I don't look.

* The slumps have hit us hard, I know John McG and myself were both 0-fers

* Word on the street is that Anna could return soon!

* A kid and his dad played an inning with us, hopefully they will be back

* It was great to see John Carey back out, and he even wore his glasses, though he has upgraded from the blue rims since this picture was taken...

* Mike Lattig made the long run in left field to snare a fly ball, we were so happy, we didn't care that it was also a sac fly 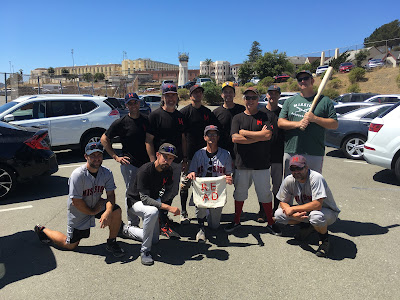 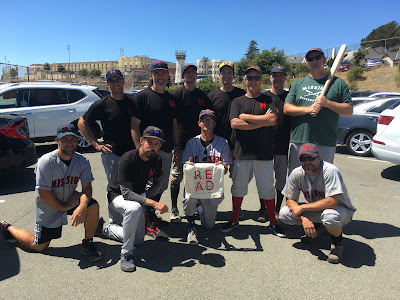 Great to be back inside with all the players.  It was 2019 the last time we graced the field of dreams inside SQ.  Hard to believe.  The coach who met us in the parking lot ran through the usual stuff, and also told us that we were not going to recognize most of the players, as they have been released, transferred, or are not playing.  In addition, one of the housing units was quarantined because of a possible COVID outbreak (it was the flu).  In we went, as usual, with 11 players, and through the sally port, and down the main road.  New things that I noticed in the main yard:

There was a opening day ceremony, the national anthem played by a lovely violin player, and two first pitches were thrown.  One by the warden, and one by Brandon, who was getting his freedom in 17 days (he had it briefly, and then was brought back due to an administrative error). The A's have about 20 players, and as usual, every one of them is fast and strong.  I started on the bump and was feeling good. I was getting unsolicited coaching advice from HR to throw harder than usual, but the extra adrenaline took care of that.

It's with regret that I say that as a pitcher in SQ, you always have to be able to shrug off the increase in errors, that come along with our games.  It is the intimidation factor and the shitty field factor all in one.  Trying to dodge 5 guys in the outfield while you catch a ball in the slippery gravel is a recipe for disaster.  Or running into a picnic bench in center, or never seeing it in the first place because it blends in with the wall.  We got out of one jam, and almost got out of another unscathed, but the scoring was kept low-ish.  We scored a run right off the bat, which was nice for a change of pace.

At the end of 5 innings, the score was a respectable 5-3 SQ, and not many of those runs were earned, though I will say that they put a hurt on the ball when they hit it square. Phelps almost made a great play on a ball that was hit to the deep alley, but after the aforementioned dodging and slipping, the ball ricocheted off his wrist, hit him in the chin, almost fell in his glove, and then dropped.

Greg, trying to channel Earl Weaver, gave me the talking to about making hard decisions for the good of the club, and took me out after that inning.  In came Nick W. who I didn't know has a real reputation in SQ.  And not the good kind.  I guess he hit a lot of batters last time, and this time did not prove to be any different.  When he wasn't getting calls, he was hitting batters.  Or having plays like mine at 1st where I put the runner in between me and the ball during a pick off, and down the right field line goes the ball, not great.  Bad vibrations lead to wheels loosening and falling off, and boy howdy did they ever.

Halfway through the 7th inning, Nick pulled himself from the game, after SQ was running the score up, and in came Phelps with the bases loaded.  Well, it the first 60 feet of that pitch was great, but the batter squared up and put it into the Native prayer garden for a grand salami.  The final total on that inning, 10 runs scored.  Whew!  Phelps settled down and pitched well for the rest of the game, but there was no way we could surmounted that hill, and the final score was 15-3.

Not our worst, which isn't something to brag about.

* Powell had a rare throwing error, but he also made an amazing sliding grab at SS for an out

* Nick S. stayed down on a ball at 2nd that had all kinds of bad written on it, and flipped it to get an out when we really needed it

* Don also gets the tough man award for taking a foul tip to the jaw that rattled his cage, all that and an unpleasant medical procedure a day prior

* The A's 3rd baseman made the play of the game, snaring a low line drive with the bases juiced

* I had 2 singles and a fielders choice, not bad since I was hitting with a toothpick

* If we could get rid of our jitters, we will be contenders with this team

* The umpire was ok, at least his bad calls were fairly even between the teams.

* James nailed a guy at 3rd, with a beautiful throw

* Nick W.- Scourge of the Convict

* Powell came into run for me, and fell victim to the hidden ball trick, perfected by Brandon.  That wouldn't have happened if I had stayed in, because I am too lazy to lead off.  Note to all, they will try the hidden ball every time

* The coaches spent a lot of time apparently getting the players ready for Sean's pick off move.  Our players are ringing out! 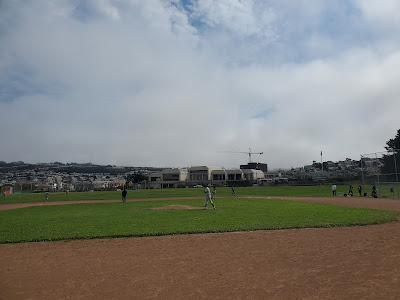 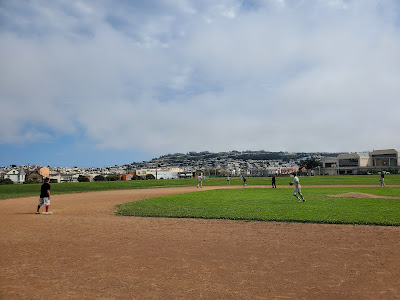 Well, so much for a relief from the summer doldrums.  We had 11 people come out.  Not enough for much of anything.

As luck would have it though, the team with the slot in front of us had a no-show for their game, and we agreed, via Alejandro diplomacy skills, that we would have a game.  For most of us, this is a rare thing, to have a competitive game.  You could see that a few of the MBCer's were excited with the prospect, and we started to hear rumblings of, "Wow, it's kinda nice to play a competitive game."

Don't.fucking.get.used.to.it.  That's what I said.  The siren song of the leagues is not far off, when this sort of talk starts.  We have a nice little thing going here with our club.

In any case, the other team was a bunch of younger, faster, guys, not a one over 5'6", and we kept up with them for a bit, but like with all things in life, entropy.  Just couldn't keep up, couldn't get the hits we needed, and if we did, they were right at some guy.  We didn't help our cause by booting the ball a few times, but for the most part, the other team was hungry for hits and they got them.

Sean pitched a great game, and left with the game tied, his innings secure.  I came in and threw a few innings, I don't feel like I did badly, but the score did not reflect that feeling.  We only played 7 innings which was a bit of a letdown.  The self-designated umpire made it clear that we were only playing 7, and we had to clarify that this was what the other team wanted, not just his own schedule  We get by just fine without an umpire, we says.

They were a nice bunch, and we shook hands at the end, which always makes the experience better. But seriously people, baseball is waiting, get your shit done on Saturday, so you can come out Sunday.

* The other team was hitting high balls out of the strike zone, which was a good thing, until we started throwing strikes consistently, and then they really hit the ball.

* Speaking of hitting, I hit two guys in the back, with change ups with 2 strikes in the count.  Talk about frustrating.  I could not get that pitch to work in that inning.

* I think if we had 2 more innings, we could have won

* Nick had a frustrating day in the outfield, two balls hit him in the glove and then popped out

* Cap tip to the pitcher who threw batting practice to his whole team before he pitched the game. That is old school right there.

* I am late with this entry so not much that I still remember.  Send me highlights if you want them posted.