Satch was home, but not available for baseball duty.  Thankfully some heartier souls were, and here with the report is our own financial guru, Jonathan "JT" Tiemann.  And if you need sound advice on your portfolio (whatever that is) visit - http://www.tiemanninvestmentadvisors.com/

Turns out Sunday is far enough from Thursday that 21 of us were able to drag ourselves out of our post-Thanksgiving tryptophan stupor and make it out to Big Rec for a Mission Baseball classic.  That puddle was still there halfway to first base, and the infield grass was as slow as ever, but the weather was great, and we enjoyed a solid game.

Johnny started for the home side, and Sean took the bump for the visitors.  Johnny began with a nifty one-two-three first inning, and for a while it looked like the visitors' hurler and the homers' twirler would just swap zeroes.  The home side finally pushed across a Chris Powell special, so we went into the fourth up 1-0.  The visitors answered with three hits, including two doubles, in the top of that frame.  They were up 2-1, with Mitch on third and two out, but Johnny got Duane on a fly to right, ending the threat.

The homers answered right away.  Johnny led off the home fourth with a clean single, and I forced him at second.  Two more grounders went for hits, and we had the bags juiced with one out and Chris at the plate.  Chris delivered the hit of the day, a double to right that cleared the bases.  I trotted home, picked up the bat, and held it up to signal the two trail runners to come in standing.  One more hit brought Chris in, and we were ahead 5-2.

In the later innings, Sean gave way to Tony, and Will Rockwell relieved Johnny.  The visitors added a late run, and the home side rallied for three more in the eighth, so we ended regulation with an 8-3 home win.  But we still had some sun left, so we played one extra.  Loren pitched for the visitors; he showed me a terrific curveball -- at least, I'm pretty sure I saw it, and I'm completely sure I didn't hit it.  After one extra, the light was fading, so we called it a very successful day.

* Mitch being Mitch, including a great over-the-shoulder catch on the dead run in short left while he was playing third.

* Daniel and Chris turned a pretty double play - Duane hit a grounder to second on that slow grass, but Daniel pounced on it a gave Chris a perfect feed.  Chris took the toss bare-handed, Omar Vizquel style, and fired the relay to first.  Close, but definitely out.

* Will went back to wearing his red shirt, so nobody mistook him for Carter

* Bob was down south watching John play f**tball, so he had to be beaned by proxy

* Phelps and Presley each played at least one inning at short, and each threw somebody out.  Who says lefties can't play shortstop?

* I'll claim extra credit for coming in to catch a sinking liner in right, but only because Ed was in center yelling "Back! Back!" the whole time
Posted by S. Paige at 1:11 PM 3 comments:

Here with the recap is Brian "Pythagoras" Phelps

We ended up with 11 players and played 3 v 3 v 3 with perma catcher and 1st base. The infield needed some pumping (thanks Bob) and raking before it was ready. The outfield was in good shape and more importantly the sun was out! To those that wrote off a game, including Greg, we needed you! Don't ever give up on this team. We are scrappy and willing to put in the work to get it done.

We put together 3 teams (Phelps, Powell, McGrath vs WRockwell, Dennis, Bob vs Ed, Nick, Adam) with Greg catching the first 3 innings (Bob came in) and Mike at 1st (later filling in for Dennis when he left). Greg, Ed and Powell came in from the bullpen later on. Phelps started on the mound and shut down it down for the first 6 outs including a 6-4-1 double play. The mound was 1st base. Will came in for the next 6 outs and that was the pattern we played with. The McPP team kept raking after the field was ready and took a big lead 9-0-0.  But all that running got tired them out and some more runs came in. Not sure what the final was.

The field crew. Not since Game 7 vs St. Louis had a field crew been the MVP of the game.

Phelps' thinks he hit Bob 2 times, but was only credited with one of them. Both were sliders.

Will said he felt like a Big Man on that tiny mound (Bob swears it is regulation. See below).

Mike played a killer 1st base.

Mike has been pulling the ball a lot more. The defensive shift might have to change.

Bob raked the shit out of one.

The 2-man outfield was exposed.

Why do you put a lefty at 3rd base? Mike got robbed by Phelps who used his inner-Daniel and supermanned for a foul ball, cleating himself and nearly getting skewered by a branch.

Greg needs to put on weight (his words) as balls find holes behind the dish.

Ed smiles a lot while on the mound.

Ed's kid got the Tough guy award after catching a liner in the leg and taking one to the face playing catch with Aiden. How long until Aiden starts playing for Mission? Kid has skills.

Some confusion on the mound distance and relative nature to the bases. Here's algebra: 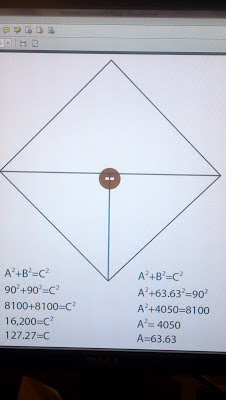 We returned to Big Rec, with the same sunny blue environs, a few degrees cooler, a few less people, and another great day of baseball.  I was late once again, and made the teams 10-10, but with a fairly similar team breakdown.  Sean was back and pitching for the visitors, displaying his usual prowess and skill.  Johnny started for the homers and pitched well, mixing his bag of tricks in with the hard stuff.  Will came into relieve Sean and Satch and Tony combined for the late inning duties in relief of Johnny.

The big news was two-fold, first, the first official game of Jen a.k.a Hedgehog a,k.a Dani Chicken Farmer's main squeeze, who hails from the great state of Loo-siana.  She had a great game, and we were all very pleased that she was willing to play with us, hopefully it is the beginning of a long and fruitful career.  Dani didn't play, which was kind of lame, but did play team shutterbug, and she flitted around the diamond taking snaps and talking trash.  Jen managed to make consistent contact in her at bats, which is more than I can say for many of us and staffed right field with aplomb.

Second, out of the blue, the original Satchel Paige showed up, and gabbed with us for a good hour.  he has moved back from Thailand and now lives in Sacramento.  Hopefully this means that he will be around more often and maybe retake the bump at some point, but for now it was just good to see him.

It was a great defensive game with a number of gems, off the top of my head: Mitch, Will, Duane, Bob, Greg, Chris, Satch, Gaspar, Elvin all made amazing plays.  I know for myself, I didn't think I had a chance at making the play, even after I made it....ain't that always the way.

The final was a tight 6-4?  we played an extra, and it felt like one of the more enjoyable games I have experienced in the last few years.  It's a good thing, we should protect it.

* Nero had a friend make some MBC decals, you know, for kids....and for helmets and vans.  My handpainted helmet is now stupid looking, again.

* The homers had at least 2 or three double plays!

* Elvin's white sunglasses scared a ball out of his glove

* Gaspar had a typical 13 pitch at bat and then hit one over the short stop's head, classic

* Mitch was again doing everything

* Thanks to our Bazooka Joe benefactor, whoever you may be.  My attorney will be contacting you about my dentist bill.  We also had a great discussion on the quality of comics that we feel has suffered

* Adam had some great saves at first

* Tony also flashed the leather, NIck's leather in fact, and used it to get Nick out, is that ironic or is that just shitty?

* I have to start getting out earlier, I am not the one you want in the outfield, but that is where I end up

* The changeup got some big outs

* Bob was hit twice, both times with two strikes and both with exceedingly slow balls.

* A great game, a great bunch of people, now can someone explain how Bazooka Joe lost his eye?

Sorry for the late, short post, but things have gotten out of control for Satch, and he doesn't have much time to do the things he enjoys, as you can clearly see from the lack of posts for the past few months.  It was a blisteringly beautiful day in GGP, we had a surplus of folks, and a good game, for the most part.

Carter went strong for the homers and Phelps was the clean up man, and Greg started for the visitors, with Tony taking over for him and Satch mopping up, although it was not very clean.  The bulk of the game, the score was 4-2, with Carter really keeping us in check, thanks to a snappy fastball and Doc's watchful eye behind the plate, thanks for coming out, Oh Bearded Sage!

We never really put together a rally and the homers just shut us down.

In any case, Greg threw well, Tony did too, and I thought I did for the first inning, but then we played an extra inning and suddenly everyone could hit my stuff...hard.  Three doubles in a row, 4 runs scored.  Owitch!

* Carter pitched a hell of a game

* Mitch was a terror all day

* Jay disagreed with a call, and told Greg to fuck himself while batting.  Tony took exception from the mound, and there was a stoppage in play while we all were reminded that we are out here for fun, and no one has to play if they can't play nice.

* Nice to have a crowd to play to

* Greg chastised me and Adam for discussing Horror movies at 1st and 2nd, while he was pitching

* I made a critical error at 2nd, muffing a play and then not throwing home when I had the runner by 40 feet, but trying to get the runner at 1st who was already safe.  Glad I am getting the chance to make errors at new positions

* The grass at Big Rec is deceptively slow, it looks well groomed, but man is it thick!

* Elvin was thrown out twice at third

* Johnny was well rested from his triumphant tour of Japan

* Bob was robbed of a huge extra base hit by, guess who, yeah, Mitch

* When the wheels came off in the 10th, they really came off, we had a tailor made bases loaded double play that yielded no outs.