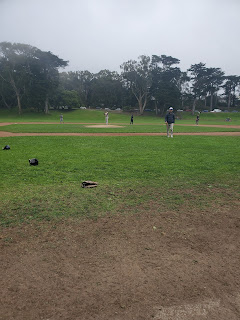 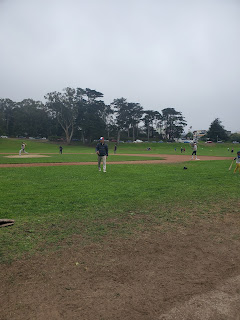 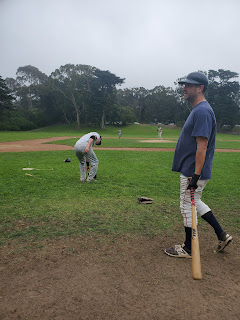 Finally a game with enough players so we weren't running back and forth covering the defense the whole game.  17 players, that is like a plethora of players these days!

I showed up late due to bridge traffic, and they were still in the top of the first, so I hadn't missed much.  Sonny was on the hill, but he wasn't happy about it.  His arm was feeling pretty off, and I promised to take over for him once I had a chance to warm up.  Carter was throwing for the other team, after appearing out of the blue.  He brought one of his kids with him, so hopefully this is a good sign for the future, though we have been fooled by the Rockwell's before.

The game was sort of close for a bit, surprising given that Chris P was on the other team, and he is usually good for a run an inning, as well as some good pitching.  That being said, I don't know if the visitors ever had the lead, but I do know that we tacked on runs at a pretty good clip.  The game wasn't slow, per se, but I think it started late, and we all had a case of the fog drowsies.

We decided to end the game after 7 innings, Sonny threw 2 and I threw 5.  Catchers were a premium, especially after Chris L took a foul ball in the twig and berries.

What we did have was a lot of new guys, recruited by HR, and Carter: Tyler (?), Eduardo, the Blue Bomber (bedecked in Dodgers gear, and swinging from the heels like a madman), and a bearded guy whose name I didn't get, but who was an interesting final out of the game.  Nick W had taken over for Don behind the dish after a quad injury seized him running to first.  I threw a pretty perfect fastball to the outside corner, and Nick shrugged and called it strike 3.  The batter disagreed, and Nick felt bad for ending it that way, and I figured it wasn't that big of a deal, so we kept going.  Suddenly I couldn't throw strike three (four) and then he hit a double to left to score two runs.

Mercy is for the weak.

* Thank you to everyone that came out, and for the new blood!

* No band this week, hopefully they have not given up on us

* New guy dove in center for a ball, we explained to him soon after that sort of thing tends to injure more than help, and he would soon lower his standards if he came out more

* Anna had a great rope to left

*Don and I managed to communicate for an entire game with him calling signs for what he thought was sliders and me throwing changeups.

* Adam had some real nice digs at first, but we also had a lot of passed balls at first

* Don kept playing after he hurt himself, thanks for the guts!

* Chris P laid off all the cheese I was serving him, to my surprise.

* Carter ran out of gas on a particularly frustrating inning that his team could not get a out.  He was shotputting the ball by the end.  I promised that I would get that 3rd out, and I did.

* We successfully made a "check the runner, go one" play.