Late Postings of Pictures from the MBC

I have been sent some pictures lately that I have not got around to publishing, so I thought I would do so now.- S. Paige

This is the rally hawk, from a game at GGP.  For those who don't know, there is at least one resident hawk at the fields at 7th and Lincoln, who is not afraid to swoop down and snare a gopher in the midst of a game. 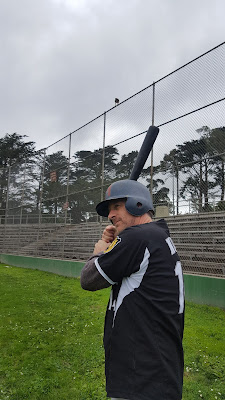 The next is the Goat Man, who has been seen several times at GGP, walking his goat.  Some old-timers say if the goat looks at you, you'll never get another hit. 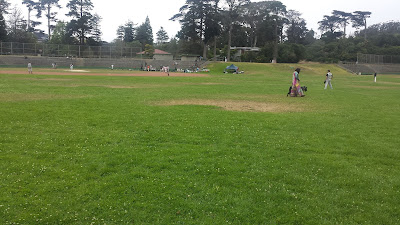 This is the victorious team from July 2016, outside San Quentin.  If I remember correctly, we walked most of our runs in, but hey, that counts as a strategy. 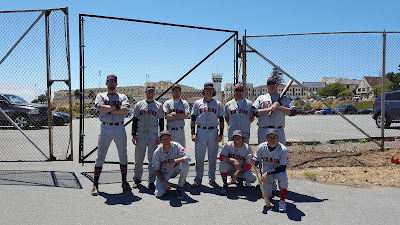 And here is a classic example of Abe's new single-out, step by step. 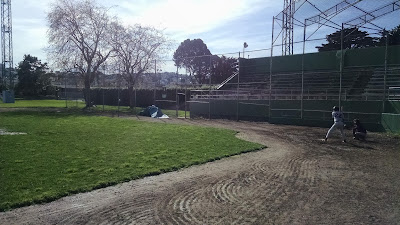 Racing around first base, he can smell the double, he knows he hit it hard, Carter is looking all slump-shouldered, why shouldn't he have the extra base? 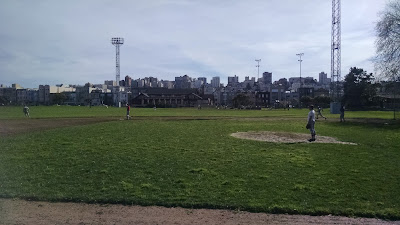 Uh oh, why is that ball so close all of a sudden, that's isn't supposed to happen?  Well, let's see, if a object is moving at approximately 10 mph towards a target, and another object is moving in the opposite direction, from a slightly greater distance,but towards the same target at approximately 50 mph, which object will arrive there first?  Abe, you're a smart guy, which one is it?

Officially there was no game, all the fields in SF were closed.  You got that?

But 18 people gathered in the city and played a game that was suspiciously like the game that we normally play on Sundays.

Carter started for the homers and Sonny for the visitors, and the field we didn't play on was in great shape.  We were a strict 9-9, and it seemed like the teams were pretty well-matched.  There was a lack of old-guard, Greg and Tony being off on some surfing adventure, as well others who couldn't make it for a variety of reasons that were probably valid.

The mud made for an interesting day in the outfield, balls that normally would have rolled for a while went nowhere, and when the ball was heaved in, one side of it was covered.  Maybe it was a game-changer, the visitors certainly had the left-center hit down, but couldn't get more than a single out of it for the most part.

The stars of the game were probably the father/son duo of Keir Beadling and his son Max, who put on a display of offensive and defensive magic for the most of the day.  Max at the hot corner was especially amazing, snaring a series of hard hit balls down the line, most of which he converted to outs.  They also had back-to-back doubles.

The game itself was the usual see-saw battle that we have had lately, that consists of the team that I am on getting within striking distance and then being gutted towards the late innings.  And Sunday, if we had a game that is, was exactly the same.  I entered the game on the hill in the 5th, with our team down a run.  We tied it up.  Then they went ahead again, and we stayed that way for an inning, and then a series of pop flies, line drives, and booted balls made the game 7-3 in a hurry.  And it ended that way.  Theoretically.

* Thanks to everyone who made it out, the email from Bob was not especially heartening, but the positive response on people that wanted to have a game was great!  And then they actually showed up, even better!

* Doc showed up, walking out of the corn like a fresh recruit.  He was going to umpire, but feeling especially spry, he ended up playing.  He got a single, and recorded an out in right field.  Not bad for a guy with three fractured vertebrae.

* It was decided that James is the yin, and Chris Powell is the yang, and therefore should not be on the same team.  The reason being that they can both hit, steal bases at will, play defense, throw people out, and in general, manufacture runs almost single-handedly.

*  Abe has a new thing.  It's getting a hit and then trying to stretch it into a double and getting thrown out by 30 feet.  I don't think it's a good thing, but it's his thing.

* I had two RBIs despite having broken my pinkie toe that morning and having to leg out both hits one of which was a swinging bunt.  Thank God for the errors of others.

* Thanks to John McGrath, Bob, Ed, and ***for catching on a day that the pitchers and the mud couldn't have been fun.

* I hit Carter with a 0-2 change-up.  That might have pissed me off more than anything else.

* The new guy who threw the last 2 innings had some great velocity.

* Chris Powell twice hit lazy pop-flies to right field, picking on an old man, he should be ashamed of himself

* Abe also broke his Fuckface bat, after 6 months of ownership.  I am starting to think that bat company is a bit nefarious.

* Good to see McGrath out, who I have not seen in a while, along with Doc

* Randy, who apprently was Musial-like last week, continued his hit parade, minus one glorious strike out, thanks to your truly, AOY 2017 hopeful.

Hope for the bet this week, but the rain looks pretty constant through Monday.


I wasn't able to make it out, celebrating Lil' Josh Gibson's 3rd birthday.  With all the rain, I was surprised that it happened.  There was a pleading email sent out by AOY Rockwell, in town on some nefarious plot, and he REALLY wanted to play ball.  Glad that enough showed up to accommodate him.

Here with the surly recap is Bob "Fuck you, and the horse you rode in on" Carey. 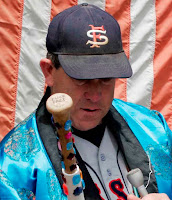 It was great to have Will out.  Carter was there, and at some point their mom stopped by with Carter’s son.  Way too many Rockwells!  Carter brought implements and he and Will were half done with the work by the time I got there.

Lousy game, the homers trounced us.  Sonny started for the home team and was mysteriously effective.  Carter started for the visitors with me catching.  He seemed to have decent stuff, but they kept barreling him up, especially with oppo shots.  Randy was on fire, lots of line drives.

I got hit.  Someone else did too.  Baseball god justice reared its head and Carter hit Sonny dead on the ankle bone, and Sonny acknowledged that Karma was a bitch.

I managed to get inside Ed’s head on one at bat.  Told him that Carter was going to knock him on his ass and he could not get the idea out of his head even though Carter did not come near him.

Lots of AOYs:  Phelps, Lattig, Sidawi, Carey, Pfahler, Rockwell.  Abe and Sean seem to be working on their campaigns.

At one point we had an all-geriatric outfield for the visitors:  JT in right, me in center, and Nick in left.  Results as might be expected.

That’s all I remember, we got it in before the rain came down, although there was a shower in about the bottom of the sixth.