Brian Girgus made a name for himself as a pinwheeling, scarecrow of a player in his time on the MBC.  I always liked to describe him as 90% mouth and 10% talent.  Not really fair, since Brian had all the tools, they just weren't sharpened real well.  He could catch, he could hit, he could bunt, he could throw, he tried pitching for a while, but eventually took himself off the mound after losing control of his pitches.


Eventually, he drifted south, and landed in Echo Park, with a degree from barber's college and a dream.  He opened the New California Barber shop, and has hosted some good events, and cut some celebrities hair (Neil Hamburger!!!).  That all pales in comparison, however, to his latest get, when he took none other than the great Bill Lee to the ocean for a chat and a cut.  For those of you that want to know more about Bill, pick up one of his books, Have Glove, Will Travel or  The Wrong Stuff will clue you into this true American original, and all-around amazing athlete.

What some people probably don't know is that this would not have been possible without an event, years earlier, at the Lost Weekend video store (RIP), where they hosted a viewing of the Bill Lee documentary, SPACEMAN, and Bill showed up to live-narrate the movie, and then answer questions.  True to character, Bill spent the hours before the movie getting "lit up like a Christmas tree" in the back of the store, on the patio, sitting at my old vinyl booth and table which I had given to Adam when I moved out of my apartment. But I digress, Brian made contact with Bill that night, and lo and behold, years later, he's cutting the guy's hair and playing catch with him!

There was talk for a while of trying to get Bill to come in with us to SQ some time, I don't know if that is still on the table, he pitched for the San Rafael Pacifics not too long ago, so he might be in the area.

In any case, great job Brian!  Come out and play some time, when you find yourself north of the smog.  No one lies as good as you, when it comes to arguing close plays.... 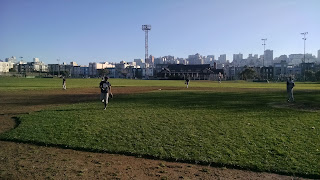 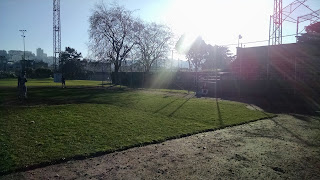 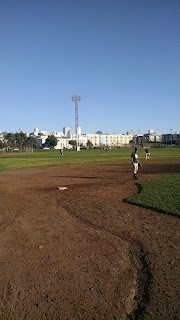 No game last week, as the rain fell.  The field was in adequate condition by the time that Lil' Satch and I got there, but I imagine that there was a lot of pre-game work done.  Thanks to those of you who put it to rights.  The mound was a gloopy mixture of mud and clay, and even with cleats, pretty slippery.  But other than that, the field was OK.

We ended up having 15, which was better than we were imagining, Greg started for the homers and Sonny for the visitors.  I can say that it was nice t play in a game that wasn't a blowout, we see-sawed a bit through the game, and while we never had the lead, we were tied for a good bit....

The game was a speedy affair, which was nice, and neither team was egregious in their errors, with the possible exception of base-running.  I was the worst offender, lackadaisically running to second, on a infield pop up, only to realize that there was only one out. Doubled off.  Oh, there was a runner on third, and it was a tied ball game too, so basically I killed a unicorn with that one.

Abe, also from my team, felt bad about his base-running, he was tagged out for trying to turn a single into a double, but I don't know that I would put that in the same category.  But, he was out by several feet.

Greg turned the ball over to Chris Powell, and I took on in the fourth for Sonny, who wasn't feeling it.  I could tell why once I started throwing on the mound, the first change up I threw, my heel slid 10 inches forward in the mud, and the ball turned into a big old grapefruit that the batter slammed into left field.  So, the next three innings I pitched with almost exclusively upper body movements, and trying to land as softly and gently as possible.  As a result, the curve ball was good, the change up and knuckle ball sucked, and the fastball was good, as long as I didn't throw it too often.

After my base running gaffe, I told my team I would make it up, and struck out the side (with a single in between).  I handed the ball off to Coney Island James, who thew the last three frames and did a good job, though he ultimately absorbed the loss.  We went into the 9th inning, knotted at 6 runs a piece, and Chris Powell bunted his way on for a single, stole second, and came home on a hit.  Just like that.  James made a great play fielding Chris' bunt, and at first he was called out, but the overwhelming thought was that he had beaten the throw (I agreed, from the view in right field).

* A fun game, and everyone survived.

* Bob tried to help us out from Left field, and threw away a ball that had come straight to him,  the runners were sent back due to the suspicious nature of the error.  He then made a great catch.  We told him alter that he's cheating on the wrong plays.

* Greg's team seemed to think that bunting with him at 1st was a good idea.

* Still 0-fer with new Carter bat, though I did have 2 RBIs.

* Lil' Satch heckled me, egged on by the team, after the base running mistake.

* There were a lot of HBP, 5 at least, I took a fast ball between the shoulder blades that is still a little sore.

* We had a player come out who has been on the email list but not shown up for at least five years, so I guess it does pay off to keep some of those names on there.

* James tried to throw out Greg at first from center field, and almost had him.  Greg threatened to rage if it ever happens.

* Tony promised he would come out and then didn't. Lil' Satch was devastated.

* I was playing Nick Smith in the hole on the right side, and as such had no chance to get to second for a force out.  That's my official stance on it, no matter what Abe says. 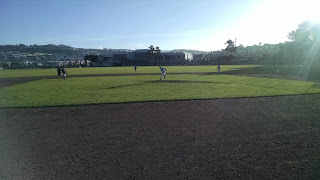 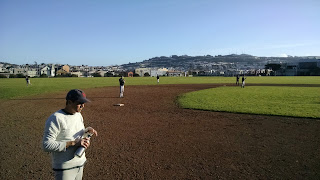 Something satisfying about playing the first game of the new year on the actual first day of the new year.  And it helps when it is a beautiful day.  A little on the chilly side, but nothing we couldn't handle.  We had 20 brave souls who braved the day after the revelry, and the field was in pretty good shape considering the rain.

Carter started for the visitors, and Satch for the homers, and Carter once again proved his dominance, with an fantastic curveball and enough change in speeds to keep us off balance.  I felt good, but I sure didn't seem to be doing the job in getting outs.  None the less, I think I struck out about 7 or 8 on my way to another crushing complete game loss.  i will save the suspense, and say it straight, our offense was bad and our defense turned worse as the game progressed.  Luckily I love this game.

That being said, we turned two double plays, and almost had a third!  So we couldn't have been all that bad.  You can't win a game without scoring some runs however, and we did little of that.  Carter, and his follow up Mitch kept us waving at pitches and grounding weakly to to all fields.

A few times, I thought I felt the momentum shift and was sure that we were going to turn the game around, but it just never materialized.  I will say my own production was paltry, every time I thought I was going to get good wood, I hit a weak-ass dribbler to third.  My teammates followed similar paths, with the exception of Greg, who was hitting sharp.

The end of the game the score was a roundabout 12-2.  I say that, because we had a couple of innings that we figured there were a passel of runs, and 12 seemed like a good number.

* Two double plays, not a bad way to open the season.

* Our team broke early, when we heaped more scorn on Nick Smith than deserved on a close play.  He got hot under the collar, and we all felt bad, and then were confused why we had focused so much on it, in the beginning of a game.

* I struck out the side, that was pretty nice

* John Carey may have had one Manhattan too many on NYE, he was taken out by the mysterious outfield sniper more than once

*In about the 7th inning, the wheels really fell off for our team, we were throwing balls all over the place, dropping grounders, the full monty

* Did manage a good play on a great bunt

* Looking back at the blog, I have thrown more CG losses lately than ever before

* The other team hit some great pitches, I was confident right up until the point that the bat hit the ball

* I hit new Nick twice, once with a country hardball, which was unintentional.  I kept getting him into 0-2 counts and then overthrowing.  I think he started to get  frustrated about the third time...

* Dennis showed up after a long absence

* We had John Carey running for Tony who is still rehabbing a bad knee.  After signs, waving, and jumping up and down didn't work, we started yelling "Hey John.  You should steal second, now!!!!"

I would like to say see you this Sunday, but instead I will say run for higher ground, and keep the canoe handy!