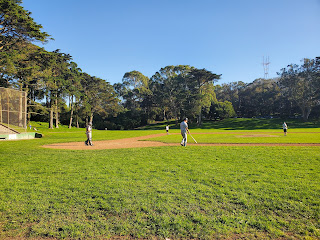 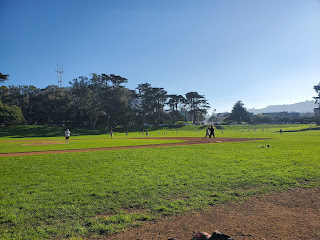 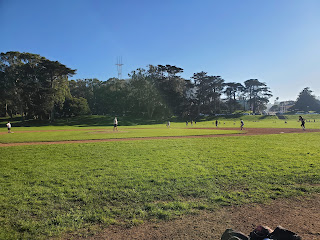 It's all feast or famine these days. We had 25 players out this glorious day, the best weather does seem to be the winter in SF.

The breakdown of the teams, I thought, was uneven from the beginning.  However, my suggestions fell on deaf ears, as plenty bought up times when the teams have seemed stacked one way or another, and the outcome has been completely out of the blue.  Not this time though.  If we had a voting block and an organized council, I would probably put forth a proposal that Chris P, Rich, Sean, and Mitch cannot all be on the same team.  That is too much speed and defense together.  We had Rich playing 2nd base, that is the flagrant defensive gluttony.

Sean started for the homers, and HR for the visitors.  It was a remarkably close game for a bit, the defense was the real gem for both teams all game.  Sean was a steady, as always, and HR has blossomed in his last few starts into a real game-time pitcher, with a sharp breaking ball and pinpoint accuracy.  He only went 2 innings though, and then turned the game to Lattig for the middle innings.  Sean stayed on the horse, with me waiting in the wings.  He threw 5, but looked so good that he did one more, and then handed the ball off.  I went the rest of the way, knowing that if I got into trouble, I had Liam as back up to mow down the late innings.  Luckily, I kept the pitch count down and cruised for most of the game.

With so many players, at-bats were a premium, and we ended the game with the homers in a comfortable lead.  The game had gone so quickly we decided to play an extra inning.  What we should have done is just give the visitors another at bat.  The bottom of the 9th turned into a cavalcade of hits, and the light was dying, as was the visitors will to keep playing.  When it finally got to the top of the 10th, they went down in order, and we all felt a little bad.

* Cap tip to Mike N. who caught the entire game for the visitors.

* Thanks to all those who came out

* Marcella had a hit up the middle and the first RBI for her team!

* Mike Lynch made some more great plays at 3rd, though he also suffered the indignity of the sniper play, fielding the ball and then going facedown on the transfer.

* Don was a late comer, but made a dazzling running catch in center

* Thanks to John McG for catching the later innings, and then a workout for Liam, who was left in the pen.

* Rich started slow, but had a walloping extra base hit in the later innings.

* Nick W. came into pitch and hit Adam about 3 times, not his best outing.

* People named Mike, Nick, John, and Chris could have fielded a full team, plus reserves.

* John Carey, back from the wilds of Connecticut was resplendent in his old uni, and showing off that he is yet unhampered by age.

* Hope everyone had a great Thanksgiving.