Here is a game recap from several players on the latest SQ exploits:

Sean pitched great and we were winning by one in the last inning but they made a little charge and beat us by a few. We had some good hits but our D and pitching seemed to be the biggest plus. They had a few plays (lucky) that made the game turn around. Chris smashed one to left and the guy threw up his glove and got it. It would have scored two at least. Still fun but looking for a win on 10/1

Kool Aid shut us down in the first inning even with some decent contact and Mitch leading off the game with a walk. First SQ hitter on with a single, second hitter(new catcher) goes deep on first pitch SQ 2-0 no outs first inning, seemed an ominous opening. Ended up getting out of it, bottom of our lineup set the table and turned the lineup over and we put a 5 spot on Kool Aid in the 2nd. SQ added a run on a solo homer by Jesse the CF, his first in SQ(he made me sign the ball after the game). I forget when or how they got the next run but going into the bottom of the 6th we were still up 5-4. I think after the 2nd inning SQ brought in Wiley(?) to pitch and he was throwing heat and shut us down except for the occasional walk or dink or doink. We had Mitch on 2nd and me on first in the 5th or 6th with nobody out and Mitch broke for third, had a great jump and Chris fucking smoked a ball to left but the LF’er made a great reaching play and tried to double off mitch with a jump throw but Mitch was able to just beat it out and nothing came of that charge.

Bottom 6, light is leaving us, i think we all knew it was probably going to be the last inning. I think they were sending up their 9-1-2 batters(or 10-1-2 i think they might have been batting 10 yesterday). I was kind of on a different planet at this point so i don't really remember what or how everything happened but i think i got the first guy out, their leadoff man(forget his name but he was the first baseman and was apparently drafted out of high school by the diamondbacks and one other MLB team) was the thorn in my side all day as i couldn't keep him off base and he stole every single base when he was on. Was able to strike the catcher out which at the time felt huge. I think Brandon in his last game was able to tie the game with a hit, a high popup to medium deep right field into that sketchy walkway/warning track area right before the tables and our right fielder from SQ, Trevor, couldn't get it. With Brandon on second was able to get two strikes on the LF’er and we were battling. I threw an elevated fastball above the eyes and he somehow went up and destroyed it to center scoring Brandon as  what we all assumed was the winning run. We hadn't discussed it before the inning started and after that hit coach Steve asked us what we wanted to do. I said if you have guys that want to keep hitting i was happy to keep pitching so we played on and true to MBC form whenever we suggest that we play extra baseball we always regret it, its always one toke over the line. They ended up putting up three more runs to make the theoretical score 9-5. We tried hitting again against Wiley and failed and called the game after the top of the 7th i guess. Im gonna call the hit in the bottom of the 6th a walkoff and say final score SQ A’s 6 MBC 5.

Don had an amazing game too, a couple past balls that he turned into throw-outs when the runner tried to advance as well as a big 2 rbi hit. Called and caught a great game, really wish he wouldn’t call for me to hit the batter after i get them 0-2 though

Yeah that's my bad. I just love beaning inmates & indeed it was the 1st inning where i drove in two with two outs & the bases juiced.

& in fact i did go for burgers & beers afterward

I'm pretty sure we got 2 in the first and 3 in the second. Never being behind in the game until the last pitch. 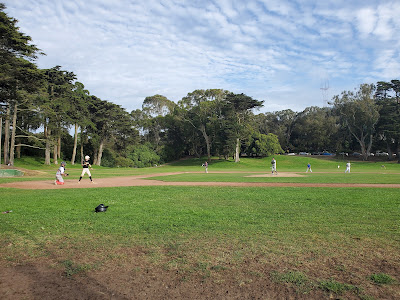 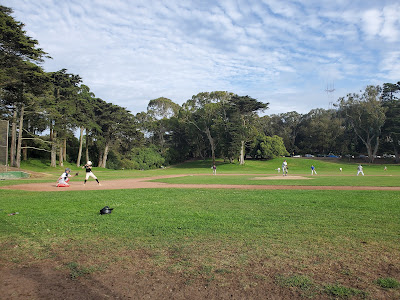 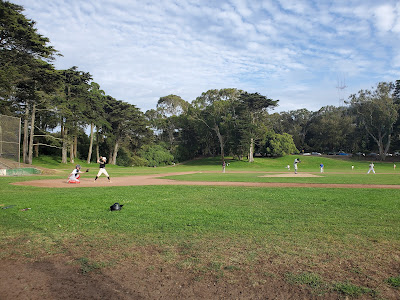 A lot of players came out, including the return of Anna from the IL and moving like she had never missed a game.  I think the total was 24 for the game, which is awesome considering that it's been Havana 6's for the last 3 months.  Let's keep it up.  It was a beautiful day, marred only by the Opera in the Park traffic that made parking a real nightmare.

Pitching for the homers was Sonny, and he was lights out for most of the game.  His fastball had a real tailing movement to it, making it hard to read until it was too late.  he augmented that with a breaking ball that had sharp bite, and he was backed by a strong offense.  Not exactly what you want to face.  We did our best, and Satch was on the bump for most of the game, matching Sonny in effectiveness...until I didn't.  I was keeping the pitch count low-ish, and we tried our best to limit the damage when the big hitters were up but it didn't always work out.

While I don't want to highlight the misery, I have to say that John McG had a real rough day in the field.  I can't put an exact number on it, but it was 5+ errors.  You could see that he had been infected with a strong dose of the defensive yips, the whammies, the hinkies.  It happens to us all at some point.  He was on the ball each time, but just couldn't get it clean and the more frustrated he got, the more he was in his own head.  Luckily, we as a team are the supportive, not vindictive sort, and I am happy to say that through the course of the game, we saw a rebirth of confidence and ability in John which was very gratifying.

Speaking of defensive prowess, how about that Marcie!  She came out after many promises of attendance, and made a great running catch in right field.  She was clearly unaware that it was not the 3rd out with her post-catch celebratory dance, but ultimately, it did not affect the outcome. She also had 2 almost-hits, stopped only by the book the defense was keeping on her.  Cap tip.

The score was something in the neighborhood of 8-2 as we entered into the last few.  We also realized that we had played an extra inning, mostly because we had the band out, and the 7th had come and gone without the Take me out to the Ballgame.  So they played it, and then we shrugged and said, well I guess it is the bottom of the 7th, not the 8th now....

Sean relieved me, as I was struck by my own version of the yips, due to exhaustion and other ailments, I struggled to finish the inning and was happy to give up the ball.  Sean did well, as did HR who came in to relieve Sonny, and Urano after that, in case we had any thoughts of a comeback, he slammed the door.  We did have a mini-rally and brought the score to 8-5 but that is where it ended.

* The return of Anna!

* Bob hit 2nd for our team, power and speed is what you want in the second slot.

* Sean almost made an amazing lay out catch in center

* The homers had at least 2 triples

* The MBC single is when you hit a sure fire out, meander down the line, and wait for someone to fuck it up.

* I almost killed Adam and Greg in collisions, but no one was hurt

* New guy Rudy caught half the game and had a big situational hit to right.

* HR hit one not-to-right field, to prove my shift wrong

* Greg also caught most of our game, all systems go!

* Mike Lynch is a hoover at 3rd, nothing gets by him!

* I made 2 catches off the mound on high pop flies, something I ordinarily try to avoid.  But I couldn't, I was the only one that could make the play.