What a day for a ball game, after all that rain and weather, we were treated to 58 degrees and sunny.  Thanks to Greg and others (seen in the photo, courtesy of Duane) for tending to the field before the game to get it ready. 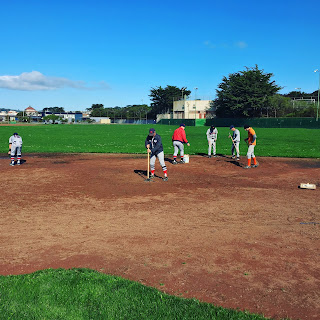 We ended up with 17, which is great for a Sunday in competition with that lame game involving behemoths and a pig skin ball.

Greg started for the homers and Carter, who has been on new baby duty for the past few months, for the visitors.  I had brought out lil Satch again, and this time we were all happy.  West Sunset has a warm up mound with a nice plate that he can practice hitting at, which is great.  He and I played right field for the first few innings, and then he went in to the bench so he could hang out with his friend Tony.

The teams were remarkably balanced, most obvious in that we both had great SS, Rich and Chris Powell.  And throughout the game, they both made essential plays, both with the bat and the glove.

The visitors may have set a record for the most pop-ups in the infield for the game, as we tried to adjust to Greg's just enough-inside pitch strategy.  On the other hand, the homers exploded for three runs early in the game and looked to be on a steam roll towards victory.  It was 3-0 for the first few frames, then we got one on a sac fly, and our bats slowly came alive.

By the 5th inning, Greg had given way to Sonny, who was featuring a new, Marichal, crane-like delivery.  We were able to see past the trickery and resumed our attack.  We tied the game at 3-3 in the 6th and then took the lead going into the bottom of the 7th, 6-3.

The troublesome 9th almost proved to be a reverse of fortune.  Satch was riding high on 6 innings of no-run pitching, and then had to face down Abe, Rich, James, and the rest of the bats in the heart of the order.   Confidence was high and I joked to Bob about hanging one to see if Rich could put it out.  Maybe I should just shut my stupid face and pitch.... In any case, Abe got on, stole second, and came around to score, with Rich sky rocketing a shot to center that Carter never got to.  Our lead began to slip away.

Luckily we got a crucial second out on a close play at first, though it was widely argued that the runner had beaten the throw.  With runners in scoring position, lil' Satch's friend Tony came to the plate, and slapped the first pitch on the ground to first base, Duane picked it up and that was the game.

* Tim, Bob, John did a great job of keeping the ball dry, as much as possible

* Long running, tumbling grab in left by John Mcg to get the third out in the 8th

* I re-institute my request for a fence or cones.  I tattooed a hanging curve to left and all I got was a double. And no, my lack of speed is not the problem....

* Greg critiqued his own bunt as he ran down the baseline

* Duane made some great stretches and plays at first base

* Other Nick made a great play at third 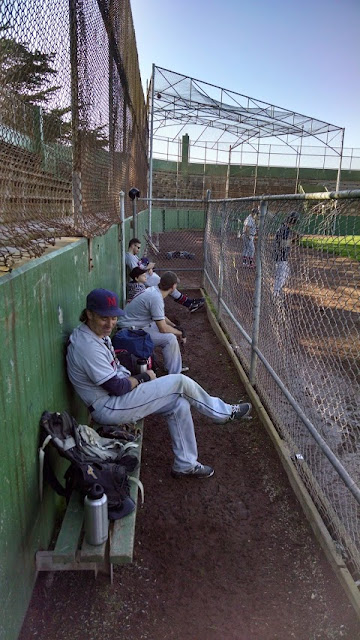 Lil' Satch and I went into the city to play, late as usual, and when we got there it was the third inning and the homers were up 2-0. Phelps was pitching for the homers and Sonny for the visitors.  We got in another inning and a half and then the Parks Department shut us down saying that the field was closed and we had to vacate.

Boooo!  The field was in perfect condition, other than a little soupy around the plate.  But maybe they are protecting their investment.  Word to the wise, from here on out, on post-rainy days, don't play at Big Rec, lets take it to some obscure field where no one cares.

Can't list any highlights, they all happened before we got there.  It was nice to get out in the fresh air.  Lil' Satch loved the shutdown cuz then he had the whole diamond to himself to hit wiffle balls and run the bases.  So, it kind of worked out. 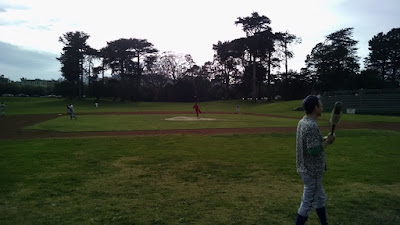 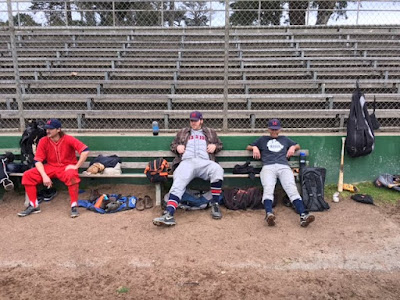 First game of the new year, always a pleasure.  As we seem to be in the beginnings of our fabled El Nino winter, we were a little worried that it might rain but Bob sent out a email that soothed the fears of a wash out.  And it did the trick, as we had 22 players come out, and not only was it dry, it was a beautiful day!  Slight chill in the air, but no wind, and the field was in perfect condition after a serious rehab from Parks and Rec.

Sean, resplendent in a red cotton ensemble took the mound for the homers.  He threw well, as he always does, but was unable to stop the visitors from scoring the first run of the year, on a sacrifice fly.  And then another. And another.  All told. he threw 7 innings, and gave up 3 runs, which is great for the MBC.  He struck out at least 3 or more, and was a consistent spray hitter through the game. Abe took over for him in the 8th, which I think was the first time I have faced him, and gave up one run.

Satch went for the visitors, determined to start the year off on the right note.  And to that end, I guess I was successful, though I don't think I struck out a single batter.  But the fastball was pretty locked in, and the change-up and curve were getting swings and my defense was playing stellar ball.  I cruised through 6 innings and didn't give up a run.  In the spirit of taking my turn to sit out, sharing, not being as asshole, and the fact that I went bowling the night before, I handed the ball off to Tony and then Sonny to take the game home.

Tony went one inning and gave up one run.  Sonny went 2 innings and gave up two runs.  While the homers made it a battle to the end, with the winning run on base, ultimately the game was decided with a 4-3 victory for the visitors.

An interesting postscript, I felt like it had been a while since I was on a team that won, and thanks to this blog I can satisfy that query.  Other than the last SQ game, I have to go back to the July 12 game to find a time when I was on the winning team.  So we can safely say that the latter part of 2015 was a real drought in the win column for ol' Satch.  Good thing no one pays attention to stuff like that.

* Thanks to everyone who made it out, the first game of the new year is always one of my favorites, along with every other game of the year.

*  John Nero was a man possessed, rapping out hits like he was 21 again

* Dennis made an appearance, and seems to have stolen one of McGrath's kids bats for game use....

* Lattig wore pants for the first time in a long while, and then slid home on a pass ball.  Timing is everything

* Abe and his brother came out, and Abe made a great play in left in addition to his pitching

* Tim's strike zone was a little hinky at the start of the game, and we had to say something.  He responded well.

* Bob made a Mitch-ian play in center field, which was followed by James also making a long running catch

* I hit two doubles and was stranded both times.

*  James was yelling from center field to hit the cutoff with a runner in scoring position.  Then a ball comes to him and he throws a laser to the cutoff man, who is standing about 7 feet from the catcher.  Luckily, there was enough time to get the ball that extra distance for the out at the plate, but I think James should be excused from ever having to throw to the cutoff man again.

* In a nail biting finale, man on first with two outs in the 9th, routine ground ball to SS, to 2nd base, dropped ball.  The MBC style.

* I hit Bob in the ass on the first pitch of his at bat and it wasn't even intentional.

* Thanks to Tim, Greg and Don for catching

* Sonny made a nice second effort play to get Sean in a rundown, after he overran second base.

Hope that 2016 is another great year for the Mission Baseball Club.

Don't look back, something may be gaining on ya.