48 Hills Exclusive- For the Love of the Game

Our baseball club is getting some local press.  Young Master Dillon came out last week and seemed a decent fellow, looked a force to be reckoned with on the diamond, and certainly got the gist of our little game.  It also seemed like he took a lot of pictures, but only used 2 of them, maybe we can get the rest for posterity on the blog?  In any case, enjoy! 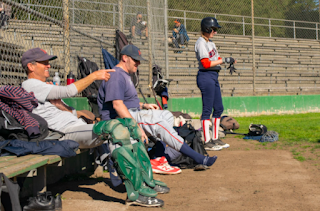 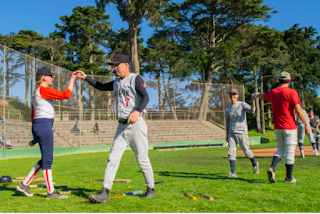 For the love of the game

How punk rockers and anti-jocks found fun and a love of sports with the Mission Baseball Club.

Greg Snyder wasn’t interested in organized sports in the 1990s. A musician living in the Mission District, Snyder and his friends subscribed to a set of countercultural ideologies as inextricably tied to punk rock as abrasive guitar and shouted vocals.

“When you’re a disaffected punk rocker-type, the sports world is alienating,” said Snyder. Organized athletics seemed mainstream and traditional, a clear target for members of a movement that directly resisted such representations of dominant societal structures.

“It was not a part of the culture,” Snyder said. “It was frowned upon.”

Despite a personal history of athletics, he had fallen away from sports altogether. In fact, his high school baseball and golf careers had pushed him further from sports: “Coaches were jerks and the teammates were unpleasant… it just sucked the life out of it,” he recalled.

Meanwhile, one member of the musical community in the Mission was countering the counterculture.

“In the 90s, I was one of three or four people that would just go out and hit a baseball,” said Dani Leone, a former member of the same musical community as Snyder.

Leone and her band, Ed’s Redeeming Qualities, moved to San Francisco from the East Coast in 1991, joining an active and colorful arts scene in the Mission District. A lifelong athlete and lover of sports, Leone and a few other members of the community began meeting at various parks around the city to play baseball. Others took notice, and soon, the original group of three or four began to grow.

“People would show up, and in true pickup fashion, say, ‘Hey, can I play?’” Leone said. Word spread around the community, and when enough people had joined in, the group began to play full games against one another.

Thus, a sort of sub-subculture emerged in the Mission, a group of, as Leone lovingly described, “poets and punkers and riff-raff” that also happened to share an interest in sports. One of the members of the growing community was Greg Snyder.

“We were all just a bunch of musicians living in the Mission who had fallen away from sports,” Snyder said. “Then [we] realized, we all still love this.” He found that he was able to reconnect with a part of himself he had lost, in doing so gaining a new perspective on athletics in general. After all, his return to baseball didn’t spawn from a desire to compete or win; he did so because it was fun.

“It takes a while to realize that you don’t have to play it at that [competitive] level to really experience the joy of it,” Snyder mused. “I hadn’t yet learned that you could really be engaged on this more casual level.”

Though they always made sure to keep things light, the group soon to be dubbed the Mission Baseball Club did dip their toes in the world of competitive organized baseball. Having assembled enough baseball-playing members of the Mission musical community, the team entered the Roberto Clemente League, a since-defunct adult baseball organization in the city. The team of “scraggly musicians” (Leone’s description) stood out, not only for their punk-rock attitudes and outfits; they were the only co-ed team in the league, with three women on the roster. “That was not done with the adult leagues,” says Snyder.  “It blew people’s minds.”

After two or three years in the Clemente League, however, the Mission Baseball Club had seen enough. “It was fun enough,” Snyder says. “But we found that it doesn’t take too many people who take matters too seriously to take the fun out of it.”

The league cranked the competitiveness a few notches too high for the musicians from the Mission, who didn’t care so much about winning or losing as long as they had a good time playing. Having tested the waters of competitive ball, the group returned to their roots. Since their departure from the Clemente League in the mid-90’s, the Mission Baseball Club has been hosting their own pickup baseball game every Sunday at various public ballparks around San Francisco.

For almost 30 years, the games have drawn players from around the Bay Area, from all walks of life. Though a core group has stayed involved since the beginning or close to it, there has been a lot of turnover in the club – some former regulars have moved away from the Bay, and others away from the game. Still, the Mission Baseball Club has lived on, its ranks often supplemented by a smattering of strangers who happened to walk by the ballfield at the right time and joined in.

Last Sunday, I was one of those strangers, having ridden my bike to Golden Gate Park to witness this week’s game for myself. Lo and behold, as I coasted up to the Big Rec fields off Pelosi Drive, I found the Mission Baseball Club. I’d been told the game would start at 1pm, and when I arrived at that time, about ten players were still playing catch down the right field line, chatting, and laughing as they warmed up.

With what I already knew about the group’s organization—or lack thereof—I deduced that a soft start time wasn’t unusual, and I took a seat in the rusted bleachers while the players got loose. Soon, I was directed to Greg, playing catch furthest down the right field line.

“Did you bring your glove?” He asked. I hadn’t, though I’d thought about it. That’s okay, Greg said, assuring me that if I wanted to play, I could borrow someone else’s.

Looking back, I still have no idea how the teams were divided. As the game neared first pitch, the 18-or-so players seemed to separate themselves randomly into two teams, one group grabbing their gloves and trotting out to the field while the others put on helmets and swung bats around to loosen up. I learned that the teams are different every Sunday, mostly due to the variance in who shows up to the games and the club’s efforts to keep the sides even. Some people are there every Sunday, others coming out every once in a while. There’s no sign-up sheet for the Sunday games, only an email list that Snyder keeps updated with the time and location of each game.

“It’s boggled my mind how we’ve managed to have both enough, but not too many,” Snyder said.

As the game ensued, I took some photos and talked to many of the players, getting a feel for the eclectic group that had assembled at the park on that sunny afternoon. Tony, one of the founding members of the Mission Baseball Club, wore a custom-made uniform, a sleeveless gray button-up jersey with “Mission” stitched across the chest. Just like Greg, he’d played baseball in high school before moving to the Mission in the 1990’s and joining the music scene.

He remembered when some of his friends had first invited him to play. Tony had declined, assuming his friends wanted to play softball. When he learned they’d be playing hard ball, he changed his tune. He’s been playing with the Mission Baseball Club ever since.

When someone had to leave around the 6th inning, I volunteered to fill in, jogging out to right field and playing some catch with my new teammates. Tony had lent me his glove, a bit worn but still in fine shape, and as I examined it, I wondered how many years the faded brown Wilson had scooped ground balls and snatched pop flies on Sundays just like this one. With what Greg had told me about the club’s roots in a countercultural punk-rock ethos, I chuckled a bit when I read the stitched letters labeling the glove model: the Wilson “Conform.”

I was curious as to how it would feel to play again; the last organized baseball I’d played, in the spring of my junior year of college, had been, from a competitive standpoint, about as far from the Mission Baseball Club as you could get. That season had marked a tipping point in my baseball career, when I realized the game had become something much different from what I’d fallen in love with as a child. What I’d assumed would be a lifelong passion for baseball had faded away; in its place I felt tension, stress, and physical exhaustion. I’ve avoided the game ever since.

As I stood out in right field on Sunday afternoon, however, the joy that I’d lost began to seep back. It was the smell of the grass, the crack of the wood bat, the sun beaming down on the field. It was the smiles, the laughs, and the warmth of a community that had welcomed me with open arms. It was viewing baseball through a new lens, successes and failures melting away in the shadow of the spirit of the game. Nobody showed up that Sunday with a need to win or do well individually. They showed up to play baseball with their friends.

Greg strapped on the catcher’s gear and caught all nine innings of the game on Sunday, a long time to stay in the squat for even the most competitive ballplayers. I figured he’d trade off with someone at some point—the other team split catching duties half-and-half—but between each inning, as the other team’s catcher took off his chest protector, shin guards, and mask, Greg was next to him putting it all right back on, cracking jokes about the sweat soaking through the chest protector as the game reached the late innings. I marveled at his endurance, figuring he’d be exhausted by the end of the game.

I’m sure he was tired, but when the final out was recorded, Greg took off the mask to reveal a beaming smile, and I don’t think it was because his team had won—and they had, 7-3. He smiled because he’d spent another Sunday afternoon doing what he loved, playing ball with his friends. As I said goodbye to Greg and the others, I was encouraged to come back. I don’t know how I couldn’t.